In yesterday’s post I mentioned that ambeR Rubarth had just returned to NYC from a long tour. She didn’t take any time to rest up, following her guest appearance at Alex Berger’s show with a show of her own last night. 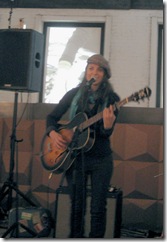 Amber was accompanied by Tony Maceli and Adam Christgau, and the three of them performed an excellent 50 minute set at the NAU NYC store. 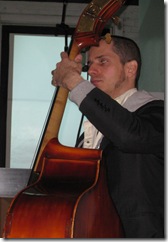 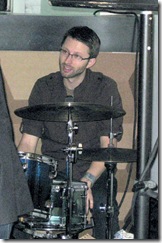 The band was set up in the corner of the first floor of the store: 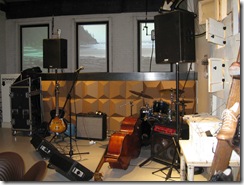 I’ve written about all three a number of times, and all of my previous praises applied to last night’s performance. In addition to loving the entire set, ambeR played Wish We’d Gotten Drunk which we had never heard her play live before (it’s on her new CD), which tickled both of us.

Toward the end of the set, I was thinking that I was really in the mood to hear Novacaine (from her New Green Lines CD). A minute later ambeR announced that she was going to play one last song. It was Novacaine. Bingo! 🙂

Rather than repeat how awesome ambeR is (there, I did it anyway), I’m going to use the rest of this post to discuss the venue and the life of a musician, rather than this particular show.

The link above is to a particular store. The chain is NAU, an eco-friendly clothing company. Prior to yesterday, I had never heard of this brand.

In case you hadn’t heard, times are tough all over for a lot of people. Retailing and musicians are near the top of that list. Discretionary spending is hard to come by. How do you get by, or even flourish, in such times?

I’ve written about a number of creative things that ambeR and The Paper Raincoat have done to promote themselves and get their CDs pre-sold and then actually sold. Being willing to sing in a clothing store is creative as well, but more importantly, it’s true hustle.

It shows that ambeR won’t miss an opportunity to connect with existing fans, broaden her fan base (after all, eco-friendly shoppers are probably a high overlap with the type of people who would be attracted to ambeR’s music) and keep her name associated with cool initiatives.

It gets even more interesting (to me) from NAU’s perspective. First, the particular store itself. Officially, it’s called: NAU Pop-Up Shop in NYC. Basically, they took an empty space in SoHo, did some super-fast renovation, and opened a store on a temporary basis. Yes, temporary!

I usually associate these temporary stores with seasonal goods, usually Halloween items. Here, it appears to be an opportunistic and very creative way to create buzz, entrench the brand, and of course, make some sales along the way. 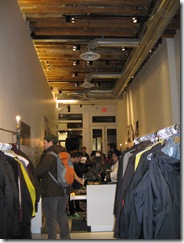 This store opened in early November, and will be closing on New Year’s Eve! So, how does a retailer maximize their investment over such a short period of time?

They turn the space into a happening, causing people to show up that would otherwise not even be aware of the store’s existence, let alone go out on a frigid winter night to shop there.

They do this by announcing regular store hours that end at 7pm each night. Then, on many nights (but not all), they have local musicians, artists, and other complementary functions, scheduled from 7-10pm. This causes buzz associated with their brand, but it also causes others (the artists, musicians, organizations) to market and bring people into the store.

Amber tweeted that she’d be at NAU. We (and other fans) showed up (happily). At the same time, an organization called Green Drinks International was holding one of their get-togethers in the downstairs lounge.

While NAU achieved some brand building at the least, hopefully, they sold more merchandise during hours that they otherwise would have been closed (certainly, the cash registers were ringing up sales throughout the evening, and the flow of people browsing the racks of clothing was steady).

The point is that in these tough times, if you stick to tried and true formulas, you’re best case scenario is a decline in business. If you are creative, and hustle, you might fail, but you’ve improved your odds of success at the same time.

Kudos to all involved in last night’s endeavor. May they all prosper as a result!

P.S. Speaking of hustle, Adam Christgau ran out to play with another group in the Village. This time, instead of drums, he was going to play bass. No rest for the weary (and talented!). 🙂