ambeR Rubarth is very good about disseminating information about upcoming shows once they’re set. When she tweeted a couple of months ago that she would be appearing in Philadelphia at Tin Angel with Ian Axel, Greg Holden and Joey Ryan on January 22nd, 2010, we grabbed tickets.

A month later ambeR announced that she, Greg and Joey would be performing on three consecutive weeks at Rockwood Music Hall in a January Residency. Rockwood is way more convenient, and we though we’d get to see them at least once. Amazingly, we couldn’t contort ourselves enough to make any of those shows, including the last one this past Thursday when Ian Axel guest starred as well.

No worries, we were set for last night, and had been to Tin Angel once before and knew we liked the place.

The gang of four had a bit of trouble with their GPS so we were actually seated right next to the stage as they scrambled in (about 25 minutes before show time). They did their sound checks and disappeared into the green room to catch their breaths for a few minutes.

Only six minutes late (7:36pm), they came back on stage and announced that they would be playing the show in the round, taking turns doing songs. We have grown particularly fond of that format from all of the CMA Songwriters shows that we attend at Joe’s Pub.

Greg Holden kicked it off with Joey Ryan doing a song we really love. They debuted the song on YouTube and I can’t tell you how many times we’ve listened to it, but it’s dozens (we sing it out loud in the car a lot).

After that the order was Ian Axel, ambeR Rubarth, Joey Ryan and back to Greg again, etc. Each of them knows all of the music of the others so well, that there was quite a bit of support during most songs (harmonies, Ian playing piano for the others and the others playing guitar for Ian). They all sing harmony beautifully.

Last night highlighted a much more significant difference between the two. Greg was about to play one of his songs and Ian was set to accompany him on the piano (electronic variety). Greg turned to Ian and apologized, telling him that he was going to play it one fret down from where they normally do.

I’m sure that there are piano players out there who can transpose a piece in their heads, and nail it. It’s not something I would want to even consider. Ian just smiled and said “No problem!”. He made one tiny adjustment on the keyboards, and transposed electronically, while being able to play in the key he was familiar with. Do that on a real piano! 🙂

They performed four songs each and one all together at the end, making a total of 17 numbers (a superb set, lasting just under 110 minutes!). Song selection was wonderful all around. Now that I’m thinking about it, they might have played five each, for a total of 21, but I wouldn’t swear to it (at least not in court).

Each of them has wonderful stage presence. Greg got the audience to sing along on two of his numbers (including Bar on A, the last one that all four of them did together). Ian felt that he was rambling in introducing a song and said “Perhaps I shouldn’t talk.” The crowd resoundingly implored him to keep talking! 🙂

Here they all are singing Bar on A: 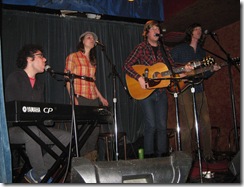 ambeR asked for one request, got three separate responses (In the Creases from Lois, Rough Cut and Novacaine). All three choices are awesome, and Lois withdrew her request and ambeR played Rough Cut (one of two songs she played using Ian’s keyboards, which makes me more confident that they played five songs each). 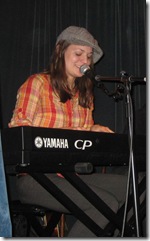 Ian knocked us out as he has from the first time we saw him. For his third number he played his current sensation, the title cut from his new CD called This is the New Year. You can lift your spirit by watching this YouTube video of This is the New Year. It has over 39,000 views already (Lois swears she doesn’t account for more than 1,000 of them) 😉 though she has sent the link to everyone she knows, and all of these views are just in one month!

Greg Holden sang the part that Chad Vaccarino normally sings. Greg did a fantastic job, but I admit that my ears are attuned to hearing Chad’s voice in that spot, and it took me a few seconds to adjust.

Our friend @HappyBee3 saw the show the night before in Rockwood and told us that she was moved to tears when Ian sang Say Something. Last night he performed it too, on the ukulele (like he did the night before), but ambeR, Greg and Joey all sang harmony with him. The song is moving enough, but with 4-part harmony, all the more! 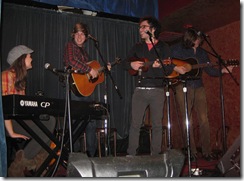 After Ian sang Gone (another moving song), Lois was nearly in tears (notice the trend from the night before?). Then Amber took to Ian’s keyboards and performed a song we hadn’t heard her play live before, and Lois achieved real tears. They all joked that Joey better pick a more up-beat song. He asked whether a song about cancer would qualify? In other words, lots of deeply emotional lyrics last night.

Joey Ryan is the only one that we hadn’t seen perform (he’s based in L.A.). He has a really beautiful voice, with an extraordinary range for a guy. He sings in the lower registers when it’s his song (for the most part), but he hits incredibly high notes, very cleanly, when he harmonizes with Greg and ambeR.

Joey plays the guitar beautifully, finger picking a storm. He writes complex lyrics that I’ll have to listen to a number of times until they’re ingrained. Toward that end, we bought both Joey’s brand new EP, Kenter Canyon and his previous full-length CD, With its Roots Above and its Branches Below. I’m listening now while typing this. Lovely! 🙂

We already own Greg Holden’s CD and EP, and Ian’s EP and CD, and ambeR’s CD/EP and The Paper Raincoat EP/CD as well. 🙂

Lois picked up a second Ian Axel T-Shirt last night. She was wearing her green one and bought a purple one.

While all four have great stage presence and are all pretty funny, I have to give a shout out to Joey for being the driest of them. He delivers his wit so soft-spokenly, so understated, expressionless (most times), that you might be tempted to think he was being serious. Don’t fall for it! He’s just flat out clever, funny and quick!

We didn’t worry whether it would be worth the long round-trip drive. What we couldn’t be sure of was how great this particular show would be. It was excellent in every respect.

All four of them were on for each of their songs, all four meshed together perfectly. The venue is intimate. The sound was perfect, with one notable exception. For a good part of the evening, they couldn’t get the feedback from ambeR’s guitar pickups to stop. It wasn’t that distracting for us, but ambeR was a trooper for plowing through it!

The audience was exceptional as well. They knew these artists well even though none are from Philly, were quiet during the songs but really loud and long in their applause after each number. They also lined up at the merch table afterward to buy stuff and say hi. It felt good to be part of it. Thanks Philly fans, you too made the drive worthwhile!

The drive down was spectacular. We were bathed in a stunning and seemingly never-ending sunset. 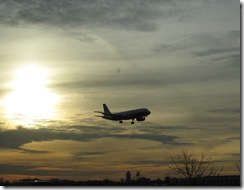 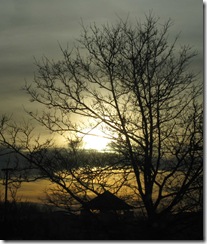 We ate dinner at Serrano, the excellent restaurant below Tin Angel. If you have a dinner reservation, they hold a table for you at Tin Angel above. The food and service at Serrano is so good (both times we were there) that we wouldn’t consider going to Tin Angel without dining at Serrano first.

Lucky for us, we’ll see all four of theses wonderful musicians this Monday night (Jan 25th) at City Winery, where they are part of a spectacular lineup of indie artists who are putting on a benefit to raise money for Haiti.