This is the first of five posts today. I normally combine an evening into one (crazy long) post, but last night’s 4.5 sets felt like it would be too long even for me.

We were scheduled to see Abby Payne at 7pm, followed by Chris Ayer at 8 at Rockwood Music Hall. I typically check out the set before in order to grab seats. This time, I wasn’t worried about getting seats for a 7pm show, on a Sunny day, at the start of the Memorial Day Weekend, so I never really clicked through to see if I’d like the 6pm act.

Then, around 4:30pm, I thought, what the heck, let’s at least know what we’re missing.

Buddy Toth was listed. I went to his site (linked to his name) and started streaming his album Ex Malo Bonum (I’m too lazy to look up if that’s something cool and/or meaningful). I figured I’d hear one song, get a sense, stop, then still plan on skipping it.

Unfortunately, I really liked what I heard. So, I let it continue. Long before I had streamed the entire album, I told Lois that we should plan on getting our act together in time to see Buddy perform. 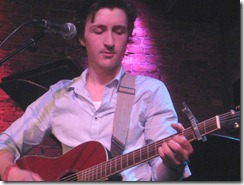 I would have bought his album instantly after I listened to it, but knowing we were going to the show caused me to wait, in case we could buy a physical CD from him there.

We left enough time to get there by 6pm, but the Memorial Day traffic (both up 3rd Ave and down 2nd Ave) was horrible. We arrived a few minutes late, probably somewhere in the middle of Buddy’s second song.

It’s easy to describe Buddy as a singer/songwriter (which means nothing other than a person who writes and performs their own songs). It tells you nothing about their style/genre. He has some Joey Ryan like qualities, though I’m hardly saying they’re the same.

I grew up loving all music (my dad played classical music non-stop, literally, 20 hours a day [yes, he rarely slept]), but my personal connection came in middle school, when Folk music (of all ilks) grabbed me by the throat and still hasn’t let go. 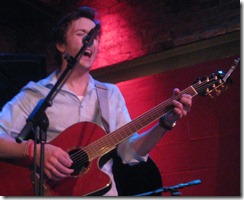 While we can all debate why one song qualifies as Folk and another doesn’t, even though they are each sung by one person accompanied on an acoustic guitar, I’ll fall back on the age-old saying: “I’ll know it when I hear it”.

The important thing isn’t that Buddy is or isn’t a Folk singer (or rather, a pure one, meaning only/mostly Folk). The point is that his songs sent me back to that time and therefore felt like I was hearing well-done Folk music, even if you would hear it and qualify it differently.

We both enjoyed his performance a lot, but as he himself joked on stage, if you wanted to hear it with fewer mistake, you should by the CD!

Matt Rein accompanied Buddy on most of his numbers. For the most part he played light percussion (shaker and tambourine). He also played the grand piano (very nicely) on a few numbers. 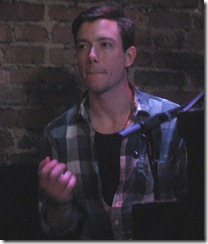 After the set we asked Buddy if he had the CD for sale. He told us it’s only available online. He offered to give us his card so that we could find it. I told him I already had the bandcamp page open in my browser, in case he didn’t have it to sell.

When I got home, I bought it. It’s a pay what you are willing thing, including zero. Buddy suggested $3.99 on stage. I happily paid more.

Most important, I love the model where you can stream the entire album (as many times as you want), for free. If you like it and can afford to, buy it. By then, you’ll know what value it has to you.

We stayed in the same seats for the next two sets at Rockwood. Each will be covered in their own posts, which I’ll start writing now!