Jesse Terry with Greg Mayo at The Bitter End

I rarely post the night of a show. Since we got home early and we’re swamped tomorrow, I’m happy to get my thoughts down while they’re fresh.

There are a growing number of musicians whose shows we do anything we can to catch.

Jesse Terry has been on that list since the first time we saw him, September 5th, 2010. We’ve seen him six times since then, plus tonight, makes eight in total. Each of those shows has been a solo effort on Jesse’s part. For the most part, others were on the same bill, performing in the round or separate sets. Occasionally, one of the others would sing with Jesse on a song. 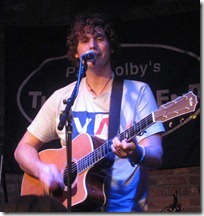 He’s great solo, and he works well harmonizing with others.

When Jesse announced the show at The Bitter End and listed Greg Mayo would be accompanying him on the entire set, those of you who know me have to realize that my heart skipped a few beats. Independent of Jesse, Greg Mayo is firmly on the above list of people I go out of my way to see as often as possible. Read to the end to see the next two (really three) times I’m sure I’ll be seeing him!

Let’s cover the set list first, then the collaboration. Jesse travels a lot (he’s a road warrior touring musician). He recently returned from a week of entertaining the troops in Greenland and got closer to the North Pole than most of us will. Time at home is precious for two reasons: 1) He’s been married for just under eight months, so time with his wonderful wife is a priority and 2) He gets to write. 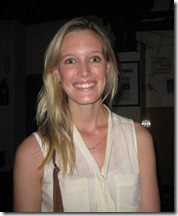 He’s been on a tear lately and it showed in his set tonight. He played two songs (Scenic Route and Bitterroot Valley) that were written in the past week (or two?). He played other very recent songs (e.g., Pearl Diver). In fact, while one of his staples was on the set list, it’s the only song on it that he didn’t play, Noise (do yourself a favor and check it out!).

So, in addition to adding a full-time sideman in Greg, Jesse was stretching his wings and breaking out super fresh material in public (likely for the first time in a number of cases). If he, or any of you are wondering whether he needs to take them back to the drawing board, wonder no more, they came off really well! 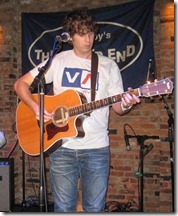 If anyone has to ask what I think of Greg Mayo, then it’s a certainty that this is your first visit to this blog. Welcome!

Greg has so many things going for him that it would be unfair to list them all here (if I could even articulate everything) given that this was Jesse’s set and songs. For this purpose, there are four things to note (which is why Jesse picked him):

Greg played on every song with Jesse. He sang some harmony, not on every song. He played roughly half the numbers on the piano (guess what percentage he played on the guitar?). 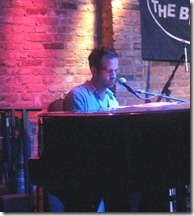 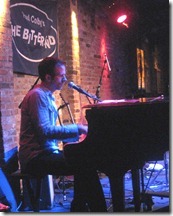 The collaboration worked extremely well. I checked with the judges (me) and they scored an 8.5 (out of a possible 10). The Russian judge penalized them (probably out of jealously). 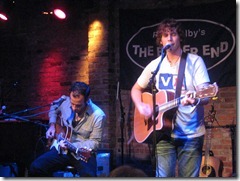 Seriously, as good as they were, if they ever play together again, I personally guarantee it will be better, even if they do nothing different. Here’s why:

How do I know they don’t need to work hard to improve, just play together again? Two reasons:

Let’s put the 8.5 in perspective. Each of these guys can bring it half speed and be better than most other performers. Neither did that and Jesse delivered his usual A game. The collaboration brought it up a notch. There are a few more notches to crank up further.

I’m already anticipating the next time. In the meantime, you can join me in appreciating everything that Greg Mayo has to offer when he’s front and center.

If that’s not enough Greg Mayo for you (it’s not enough for me!), then you can come earlier on Friday. Same place, Rockwood Music Hall, 9pm, the amazing Rebecca Haviland is performing (what a voice, playing terrific songs). Greg plays the keyboards in Rebecca’s band. Nice bonus, since we’d show up for Rebecca even if Greg wasn’t there.