I didn’t particularly have an interest in seeing War Horse, even after it won the 2011 Tony Award for Best Play. We ended up seeing it last night (how that came to be, below), with extraordinary seats, in the second row.

I don’t go to the theater often enough for anyone to take my opinions to heart. When we make it out to Broadway, it’s more often for a musical than a play. Even then, often for the same musical (we’ve seen Wicked 10 times, already heave tickets for our 11th). Clearly, War Horse is a runaway winner, not just with critics/awards, but with audiences (tickets are very hard to come by).

With that out of the way, here is my opinion of the show, with no spoilers (not that there’s much to spoil to begin with).

You can see more good than bad bullets above, and that’s ultimately how I felt about the show. I enjoyed it, and on a few levels am glad I went, but that this won the Tony Award for Best Play makes me sad to think about the state of Plays on Broadway. Perhaps there are too few to choose from to begin with.

To me, this should have won for the puppetry, in the same way that movies win Special Effects Oscars, without even being considered for Best Movie. 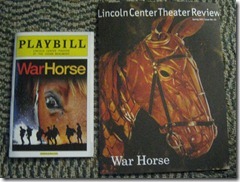 The cast received a standing ovation (from me too). Many of them deserved it (especially the puppeteers), so I didn’t feel silly standing. The real point is that for probably most everyone else in the theater, they were standing because they loved the show in every respect. 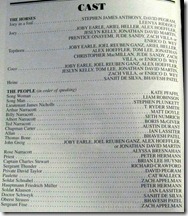 How we got there, which is one of the levels that I thoroughly enjoyed the show.

On July 6th, 2011, we met three young men who are attending the Mason School of Business at the College of William and Mary. They were up on a business trip and we all had dinner together followed by seeing two sets at Rockwood Music Hall. The first set (and a paragraph about the dinner) was covered in this post, which includes a photo of everyone who attended the dinner at the bottom.

One of those men is someone we’ll call John (because that’s his actual name).

John and I stayed in touch mostly through Twitter and he exchanged a few emails with Lois over the following months. John is in the Army, having served multiple tours in Iraq. In a recent email exchange, he told us that he was coming to NYC for a weekend with his wife, Alicia.

He mentioned that they were considering seeing War Horse. He has the obvious connection of being a soldier. Alicia is a horsewoman (a serious one at that), so she had independent reasons for wanting to see the show. I had a curiosity that came more from the musical side (I’ll conclude with that) so we suggested that the four of us see it together.

We also arranged to meet for dinner a few blocks away at Rosa Mexicano. Early yesterday morning we found out that in a couple of days, John will be promoted to Major. John was surprised that we knew when we congratulated him at dinner. We heard the news from our friend who introduced us back in July. We toasted his accomplishment and shared an incredible meal (well, at least mine was incredible). 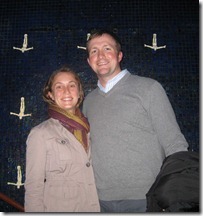 Both John and Alicia raved about the show afterward. I think that bringing their own perspectives to the performance made them connect more deeply with it than I did. For example, one of the things that John talked about the second the show was over was how well they captured the feeling that individual soldiers on each side experience nearly identical feelings.

Alicia being a horsewoman, explained how every nuance of a real horse’s movements was captured to perfection by the puppeteers. I’ve been around thousands of horses in my life (you don’t want to know how much time I’ve spent at the racetrack, both thoroughbred and harness), so I wholeheartedly agree.

When the show was over, we tried to catch a cab together. Given the freak October snowstorm in NYC that day, it wasn’t going to happen. We parted ways and Lois and I walked a number of blocks over to Central Park West. We ended up sharing a cab with a couple who was in town from San Diego for the weekend. They too had just seen War Horse (and loved it!). We dropped them at their hotel and continued to our apartment.

Circling back to one of my personal curiosities about War Horse. On May 23rd, I saw two sets at Rockwood Music Hall Stage 2.

Mighty Kate (Katy Pfaffl) was the first one (covered second in this post). While she was on stage, War Horse was winning the Drama Desk Award for Outstanding Play! She had a special guest star join her to sing a duet, Matt Doyle, who is also in the show.

So, I had a personal interest in seeing each of them.

Katy is listed in the Playbill as Kate Pfaffl. She is the primary singing voice throughout the show, in a visible/background/narrator way. In other words, she’s not part of the scenes, but she’s often somewhere on stage, singing while the play is going on.

She has a gorgeous voice. She sings in a Scottish accent throughout (an interesting surprise for me). It’s hard to concentrate on the lyrics, because quite often, there is action happening on stage, even dialog (which is independent of not being used to hearing a Scottish accent in song).

In addition to singing, Kate also plays the violin (one of her multi-instrumental talents) a number of times.

There is a male singer, Liam Robinson, who is on stage a bit less than Kate. Most of the time that he’s on, they are singing together. They sounded fantastic. He played accordion and harmonica.

What of Matt Doyle? He has CDs out and clearly has a wonderful voice (from the show we saw in May). To my surprise, he doesn’t sing a lick. He’s one of the lead actors in War Horse, playing Billy Narracott. He was one of the strongest performers.

So, both Kate and Matt impressed (if I added mightily, which was my instinct, we would have come full circle back to Mighty Kate).

3 responses to “War Horse at the Vivian Beaumont Theater”