We wanted to see the last set at Caffe Vivaldi last night. Having been there once before, we knew how small it is. We also assumed it would be mobbed for that set (it was). We checked out who was on before. When we noticed that the first set of the night included someone we’ve just recently discovered, we decided to spend the entire night at Vivaldi.

Joe Whyte was listed first. Alec Gross (the person we’ve seen) was listed as “w/”, which often means opening, but I assumed that he was supporting Joe. It turned out to be the kind of show we like, with Joe and Alec alternating performing their own songs. At times, each sang harmony with the other and there was a bit of guitar support for each other’s songs as well.

Joe’s part of the set was very good, but his voice wasn’t very strong. His harmonies with Alec were very good though, as his higher notes blended better when there was another voice. Joe played the harmonica very well. I just listened to a number of songs on his site (they start streaming instantly) and his voice comes across a bit better there.

Alec played a dramatically more mellow set than the last time we saw him, when he was supported by a top guitar player (Will Hensley) and a drummer. I’ve mentioned before that Alec is an excellent harmonica player and that was true last night again. 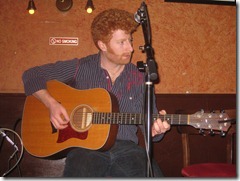 I enjoyed Alec’s set a lot, but I liked the fuller, slightly more upbeat version from the last show a bit more.

The last time we saw Alec, we ran downstairs to catch Derek James whose set started a few minutes before Alec’s finished. Lois felt badly that we didn’t get a chance to buy Alec’s new CD (Strip the Lanterns) that night. She rectified that by purchasing it before their set began. I’m listening to it now as I type and enjoying it very much!

I enjoyed the experience thoroughly. Both Joe and Alec are hilarious and incredibly quick witted. They even joked that they talked more than they sang (they didn’t, but I suspect no one would have complained if that were the case, I know I wouldn’t have!).

In addition to being funny, they’re both extremely nice (or do an amazing job coming across like they are). I believe that I would seriously enjoy spending time with Joe.

The one distraction was that Joe is a doppelganger for Josh Gomez, a.k.a. Morgan Grimes on Chuck. You be the judge: 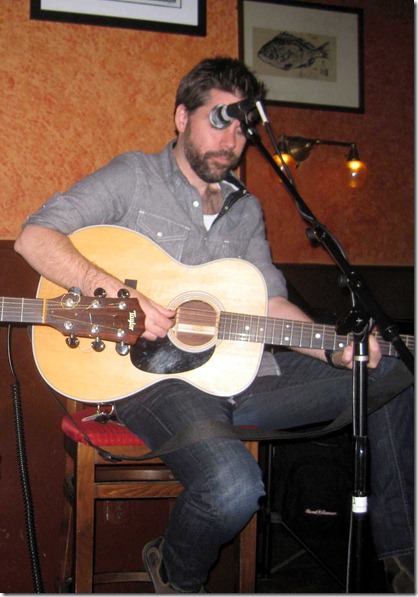 In a not-so-small irony, he has similar mannerisms and comes across as equally relaxed in his humor, completing the illusion (for me) that Joe Whyte is actually an alias for Josh Gomez.