Alex Wong is someone I’ve written about so many times. Starting with this post, I’m going to do my best to never write about him again. The reason? Too many darned Alex Wong’s running around getting famous on the Internet. In order to stake out a defined spot, our Alex has chosen to revive his long-dormant middle name.

Alex Liang Wong will now be the target of my admiration (and to save myself a bunch of typing, he’ll also be known as ALW). Feel free to beat me up in the comments if in the future I slip and call him by his old name.

There have been other (in)famous Alex Wong’s for a while. So, why change the name now, specifically? Because ALW is getting close to releasing his first-ever solo album, on February 14th, 2012. Having your name collide with others is a friction point and ALW wants people to be able to find his music more easily.

Amen to that. This new album will be amazing in every sense of the word. That brings me to last night’s show.

ALW has been playing a number of the songs from the upcoming CD for a while now. Some of them are deep earworms for me and have been since the first listen. They have morphed from purely solo efforts (when only ALW knew them), to duets, to slightly fuller band versions, over the past six months.

Last night was the culmination of that progression. ALW has already recorded the CD (mixed and mastered as well), so he knows exactly what it will sound like to the world. He’s finally ready to get closer to reproducing that sound live (which is a big trick, because aside from being a great songwriter, ALW is one of the best producers around, so his CD is not going to be a humble singer/songwriter sitting alone at a mic with his guitar).

Rockwood Music Hall Stage 2 was packed (from the set before as well). ALW played mostly new songs, but he threw in a big surprise as well. He played the grand piano on most numbers, and some acoustic guitar, of course singing the lead on every song. 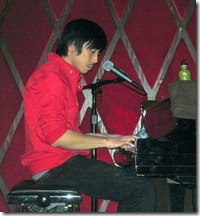 He had a number of special guests and a core band of three fantastic musicians. He also performed one song solo on the acoustic guitar, Patiently, which is a great song. There’s a video of him doing a solo version on the site linked to his (new) name above. The CD version will have a much bigger sound with a full band.

Since the core band played on almost every song, let me mention them first, and then cover the guests in the order that they appeared.

Ward Williams on cello and electric guitar. Ward was outstanding on both, but I was particularly impressed with his play on the guitar. ALW has created a lot of unusual sounds on the new album, and much of effort to reproduce those live fell to Ward. Very impressive! 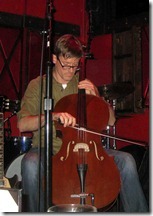 Ward also sang a lot more harmony with ALW than he has previously. He really nailed it every single time. I’ve always been a fan of Ward’s, including his performance in the set before, but this might have been the best all-around performance of his that I’ve attended.

Elliot Jacobson on drums. Elliot is always great, with last night being no exception. That said, as I think I’ve mentioned before, drumming for ALW on a song that ALW wrote has to be a challenge. ALW is first and foremost a percussionist himself, so he doesn’t tend to make vanilla drum tracks.

Of course Elliot is up to the task (there’s no way that ALW would consistently pick him to play his shows otherwise), but I’m still impressed to see it, each and every time. For a specific example, the major beat in Never Look Back is in opposition to the basic melody and in my head, feels like it would be really easy to lose focus as a drummer. Not only did Elliot nail it, he took the subtlest of cues from ALW when the song started as to tempo and volume, adjusted instantly, and then drummed to perfection for the remainder of the song.

Tony Maceli on electric bass. Tony is one of my favorites, but clearly he is one of ALW’s too, since he plays so many of his shows. Good choice. Tony was excellent last night. When I ran into him on the sidewalk as we left, I mentioned that the bass was the critical part in reproducing the really big sound in the bridge of Never Look back. So, Tony and Elliot were really key in that number.

Alex Berger (who headlined the set before, covered here) joined to sing The Fighter, a song they co-wrote (and it will appear on each of their upcoming albums, I’m betting it will sound quite different on each).

ALW also called up Alisa James to sing harmony with them (I couldn’t find a good link to her).

Before the show started, ALW tried to convince Rachel Platten to join him on a number they co-wrote, Make It Home (that link takes you to a page where you can listen for free, but please buy it, as 100% of the proceeds go to CityHarvest.org!). I saw Rachel shake her head no, but I couldn’t hear her reason. 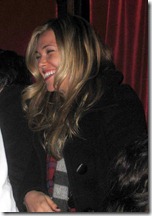 When Alex got up to that number, he joked (or perhaps he was serious!) that Rachel couldn’t play it because she was contractually prohibited by her record label from appearing at the show. I think he was kidding. I’m guessing that they didn’t rehearse it and Rachel wasn’t prepared to wing it. But, even if it was true, ALW performed it beautifully by himself, so we got to enjoy it anyway.

ambeR Rubarth was a very special guest. She and ALW had a group called The Paper Raincoat which is actually solely responsible for our immersion in the indie music scene in NYC (we saw them at the Canal Room on April 16th, 2009!). ambeR took to the piano and ALW to the acoustic guitar and they performed one of their Paper Raincoat songs, The Same Old Things. Yay! 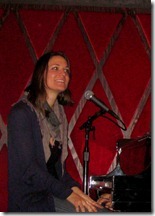 David Fallo joined on that number and sat in on another, playing the viola as well as he always does.

To close the show, ALW picked one of my favorite songs (I’m obsessed actually, I could listen to it 24×7): Are You Listening. Typically, ALW has at most one other person singing the chorus (Yeah, Yeah, Yeah, Yeah) with him on stage. That never matters, as the entire audience sings it with him (no one sings it louder than I do).

Last night he shook it up a bit and had a ton of the best singers around belting out the chorus with him on stage. The wall of sound coming from the stage was heavenly and made it a bit more difficult to hear the audience singing along, but I’m not complaining!

Ari Hest, Martin Rivas, Ian Holljes, Elizabeth Hopkins and Eric Holljes. The last three names listed are 3/4’s of the singers in the amazing band Delta Rae. ALW is producing their new CD as I type (literally) and it will be awesome, I have no doubt! 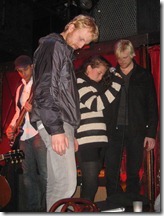 Here’s the (planned) set list. As you already know (e.g., Rachel Platten did not play), this was not followed like a blueprint, but rather like a guide. Don’t Be Afraid also didn’t make the actual cut: 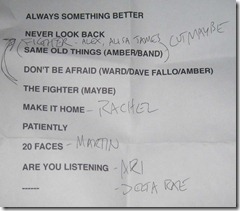 Like I noted in the previous post, we ran into a lot of people between the two sets. Here are some photos that Lois snapped as we were heading out the door: 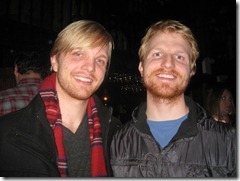 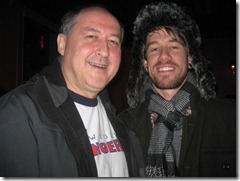 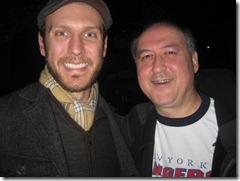 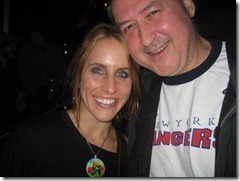