Kristin Andreassen headlined a set at Rockwood Music Hall Stage 2 last night. I’ve heard about Kristin from my friend Kevin for quite a while and was glad to finally make it to a show.

Kristin has a lovely voice and played the acoustic guitar beautifully. I would characterize the set as a blend of bluegrass (without the fiddle or mandolin), traditional country (not today’s rock/pop country) and country gospel. I liked it all, thoroughly.

For the most part, Kristin sang very softly. That worked well considering the audience in Rockwood was very respectful. It was particularly suited to the gospel numbers that came across a bit more worshipful in the hushed tones.

Kristin was accompanied by an amazing band. Left-to-right on stage:

Chris Eldridge on acoustic guitar and vocals. Chris is the guitar player in The Punch Brothers. If you know them, or their fearless leader, Chris Thile, then you already know how good Chris Eldridge is. If you don’t, then take my word for it instead, Chris is exceptional on the guitar and he sings beautifully too. 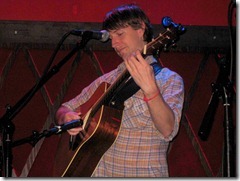 He sang harmony with Kristin on every number (or practically every one). His flat-picking leads were gorgeous and blended well with Kristin’s finger-picking and rhythm guitar. On at least two numbers (the more gospel ones I believe), it was only Kristin and Chris, with the others taking a momentary break. 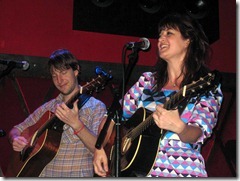 Robin MacMillan on drums. Robin was excellent. The set was mostly on the very mellow, quiet side, so his play supported that appropriately (lots of mallet instead of sticks, hitting cymbals on the rim with the side of the stick, etc.). Very well done. 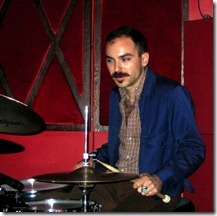 I don’t know if you’ll agree with me when looking at his photo, but I couldn’t stop thinking about how much Robin resembled a young Billy Bob Thornton. All I could think about was “Man, Billy Bob could play the drums when he was young!”

Jacob Silver on electric bass, very light vocals and whistling. He was mostly called Jake, but web-based references are mostly to Jacob. His bass play was amazing. In fact, he rarely played traditional bass lines. Most of the time he was playing sophisticated (and fast) lines that were more like harmonies to whatever Kristin was singing, or Chris was playing on the acoustic guitar. Outstanding. 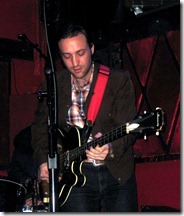 During the intro to one song, he whistled into the mic, which along with Chris’ guitar play, made the song feel like it belonged in a spaghetti western.

He also sang very light harmony on one or two numbers.

Kristin played one song she started long ago, but just recently finished. It wasn’t the new song she had originally intended to play, but regardless of how good that one would have been, this one was a huge hit with the crowd.

Butts Afire is a story born from cold nights in a house where the only heat was supplied by a wood burning stove that Kristin used to sit on to try and warm up more quickly. The song is about an entire extended family who end up with their butts afire. Fantastic fun, delivered with the appropriate tongue-in-cheek and upbeat quality one would expect from such a song.

Aoife O’Donovan sang harmony (gorgeously), along with Chris. I’ll have much more to say about her in my next post, which covers her set. 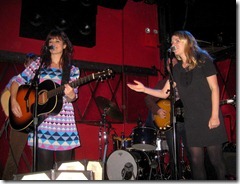 After finishing the song, Aoife encouraged Kristin to do another, and not worry about how much time was left before her set. Very generous!

Kristin then called up another guest, who was also slated to appear with Aoife in the next set.

Ryan Scott played electric guitar on the final number. He was great, but like Aoife, more about him in the next post.

It turns out that I saw Ryan play acoustic guitar once, in July 2010, when he played a couple of songs supporting Christina Courtin at the Gulf Coast Benefit at City Winery. I had nice things to say about him that night as well.