Greg Mayo Band headlined a set at Rockwood Music Hall Stage 2, in a tribute to Hall & Oates. Tributes of any great band are often really fun shows (nostalgia aside, the music has obviously stood the test of time). This one was more than just fun, it was also meaningful. Greg’s dad, Bob Mayo, toured with Hall & Oates for 10 years. Sadly, he passed away way too young, eight years ago. 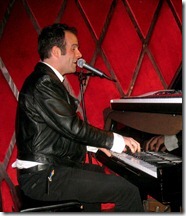 We’ve been to five Greg Mayo Band (GMB) shows prior to last night. The main reason why I write this blog is to remember specific details of the shows we attend. I just reread the post from the very first GMB show we attended (14 months ago) and was snapped back to that magical night instantly!

All five of the shows we attended were mostly Greg Mayo originals, with a few Soul/Funk covers thrown in because they just happened to be awesome songs. The last show, which we sadly missed, was a tribute to Peter Frampton (I believe). Bob Mayo toured with Frampton extensively, and was one of the big reasons that Frampton Comes Alive is still the best-selling live album in history.

Greg mostly alternated Hall & Oates tunes with his originals. Once or twice he threw in two of his in a row, and two of theirs in a row (just to keep us on our toes).

The Hall & Oates numbers were great, with a big portion of the crowd singing along (many dancing as well). But, I can tell you without the slightest exaggeration, that every Mayo number sounded equally awesome, with a couple of them topping the Hall & Oates ones in terms of crowd fever! 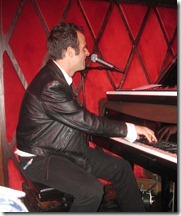 In case you need proof of the dancing: 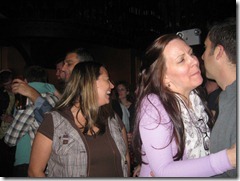 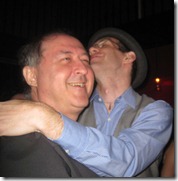 Greg donned a leather jacket (that was a tad on the small side for him). He told us the story of how he came to posses it. It was originally purchased (and worn by) Daryl Hall (yes, of Hall & Oates fame). When Daryl tired of it, he gave it to Bob Mayo. It was too small for Bob, so he gave it to Greg’s mom. She eventually tucked it away in a closet never to wear it again. Greg stumbled on it one day and heard about the jacket’s travels when he asked her about it. A historied jacket makes it’s public appearance on exactly the correct night. 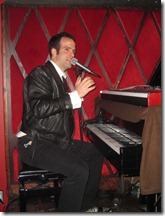 Please indulge me a commercial break, by not skipping ahead. If you can help, please do, if you can’t, at least read to be aware of what affects these musician’s lives.

Greg Mayo, along with four of the additional seven band members, teaches at Lagond Music School. It’s one of their primary sources of income (heaven knows it’s not from these indie gigs!). As important as it is for them to make a living (so that I can continue to see them perform), they are passing on their skill and love of music to the next generation of people that I will want to go see.

Lagond School of Music (LSM) came upon hard times in the past year, due to a cascading series of misfortunes tied to a fire in a deli below their school (don’t ask for the specifics, it’s truly a horror story). This year, they have had a number of fundraising efforts to try and get back to a steady state.

One of those efforts is actually being promoted by the teachers at LSM, including the five people on stage last night. That’s an IndieGoGo campaign. There are seven days left to help them out, with every dollar helping more than you can imagine. If you want to contribute, please click this link.

Don’t be concerned that they appear to be far from their goal. IndieGoGo allows them to keep whatever is raised, so your donation means something even if they don’t achieve their goal. Since this is only one of a number of initiatives, I’m happy to report that while they have a gap to close, they’re doing reasonably well across all fundraising.

End of commercial, but I will mention it again below, in the context of the individuals who teach there (to guilt you into contributing if you happen to really like that musician, but didn’t click above).

Rebecca Haviland on vocals and tambourine (and hot shades). It feels funny to type something as simplistic as on vocals to describe Rebecca’s voice and her contribution to the Greg Mayo Band. On the other hand, if you read this space regularly (as recently as Thursday morning), then you might be bored with me going on and on about Rebecca.

In addition to singing, on one of Greg’s numbers, Rebecca leaned over the piano and held one note on the keyboards, finally sliding halfway down to add a flourish to an amazingly great Greg solo! 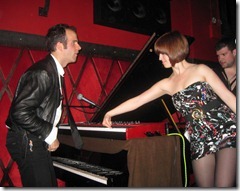 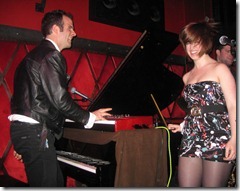 John Liotta on baritone sax (and muscle shirt). Still no good individual link (I guess he hasn’t been shamed into creating a site even though I chide him in these posts every time I see him perform). He was great, including a little duel with the tenor sax, which I’ll mention again two people down.

Josh Reed on trumpet. Josh was great, taking one long trumpet solo that got the crowd hot and bothered. Josh is one of the teachers at LSM. When Lois and I visited the school, we bumped into Josh setting up one of the rooms for a class. We had seen him play before with GMB, but had no idea he taught at Lagond. That day he was sporting a full, bushy beard. Last night he had it trimmed way back. I wonder if his students would have recognized him.

Steven Salcedo on tenor sax (and John Oates impression). This was our first time experiencing Steven. He was extraordinary, taking more of the leads than the rest of the brass section. 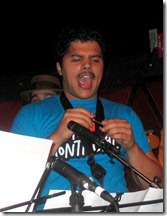 He was the dueler along with John Liotta. Each took leads, then started the classic battle of the saxes (hmmm, somehow, that sounds wrong). Awesome! 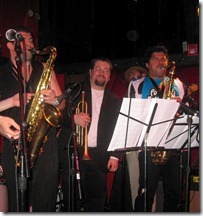 I got to shake his hand and tell him how great he was when he walked into Rockwood 1 before the next set started. I also got to ask him how to spell his last name.

When I Googled him this morning, I found out he too teaches at Lagond (or is at least associated with them in some way). Apparently, Greg can keep the band full of great musicians by drawing from nowhere other than Lagond, if he chooses to.

Zach Jones on drums and vocals. Zach just headlined a set we attended on Stage 1, right before this, playing acoustic guitar. Now he was at his more typical drum kit, kicking a** and taking name*. He was filling in for the regular GMB drummer, Kenny Shaw. Kenny seems to be avoiding me this week. I don’t like that one bit, but if someone is going to replace Kenny, Zach would be at the top of my list, any day of the week. 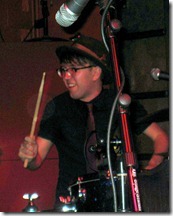 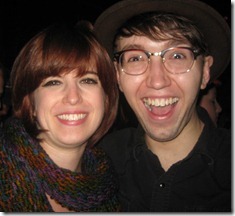 Chris Anderson on electric bass and vocals (and a dapper outfit). Don’t be bored when I repeat (for the thousandth time) how excellent Chris is on the bass. Instead, let me distract you by saying that Chris also teaches at LSM. It was entirely due to Chris and Greg that we visited the school, were extremely impressed by what we saw and heard, and decided to contribute. Now it’s your turn. 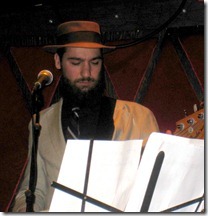 Paul Maddison on electric guitar and vocals (and neon orange jacket goodness). Paul did his typically wonderful job on the electric guitar. And, drum roll please, Paul is also an instructor at LSM! 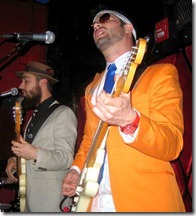 Here’s a shot of Rebecca singing, with the full brass section wailing, along with Paul Maddison on guitar: 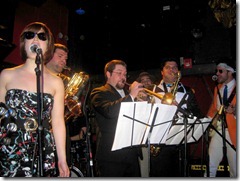 Here’s the set list. The last entry, marked E: SH means, Encore: Sledgehammer, and man, it most definitely was! 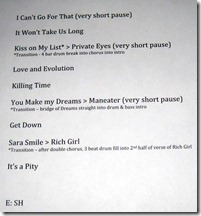 Whatever superlative I use to describe how perfect this set was, would be an understatement. That the word perfect could be considered an understatement, is all you need to know. Get yourself to the April show (the exact date isn’t listed on the Rockwood site yet).

As usual, we didn’t enjoy this music alone: 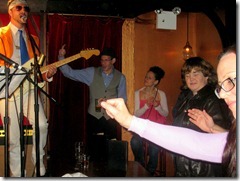 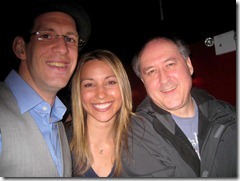