Buddy Mondlock headlined a set at Rockwood Music Hall last night. I am slightly embarrassed that I had never heard of Buddy. I was intending to see him anyway, because I was at Rockwood to see the set before and the set after him.

The set before was Jesse Terry, and Jesse sent a message earlier in the day that he was going to hang around to see Buddy because he has been a fan for a long time. Cool, now I didn’t need to worry about whether that hour would be good or bad. 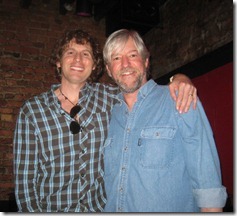 After the fact I feel even sillier having worried about Buddy’s set. It was fantastic.

Buddy’s music is classified as Country & Folk on Gracenote (the database used by iTunes and others). That’s accurate, but the Country part fits more from Buddy’s sensibilities. I would characterize the live performance as nearly 100% Folk, delivered as classically and beautifully as you could imagine.

I kept thinking Peter, Paul and Mary throughout the set. Not that the songs had even the remotest similarity, nor the vocals. The feeling, of soft, yet somehow still lush music, that just relaxes you and transports you to a meditative state.

Buddy is clearly an amazing songwriter (the reason for my embarrassment is that his songs have been cut by some pretty big stars). He’s actually recorded with Art Garfunkel and been on TV with Peter, Paul and Mary (which I learned after feeling the similarity noted above).

Buddy sings super softly. He’s well aware of that. He asked the sound guy (Armando) to crank his vocals to compensate. It all worked out well, because the audience was deadly quiet (not even a whisper, thank you, other people). That softness adds to the meditative quality I mentioned.

He plays the guitar so beautifully. I will guesstimate that he finger-picked 45%, strummed 45% and flat-picked 10%. All were perfectly suited to the song and vocals.

I have no doubt that Buddy could have performed solo and held my attention completely, he’s that talented. But he chose to enhance his sound with a partner and it was an excellent choice.

Mike Lindauer on acoustic bass and harmony. Mike played a 5-string fretless acoustic bass. So mellow, so good, so appropriate. He sang beautifully on most numbers. Wonderfully matched with Buddy. 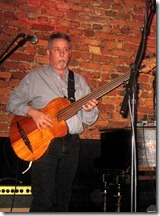 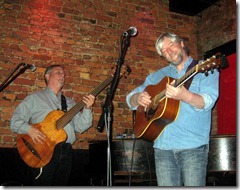 The minute Mike pulled the bass out of the case I was mesmerized. It’s one of the most beautiful instruments I’ve ever seen, certainly the most beautiful bass. Buddy mentioned it on stage as well, saying the he’s sure some of us would want to talk to Mike about the bass after the show. He was reading my mind.

That’s exactly what I did. Mike told me that it was custom, hand-built by Rick Turner of Renaissance Guitars. Wow, Rick does amazing work.

After the show we bought two of Buddy’s CDs: Poetic Justice and The Edge of the World. Buddy signed one for us. I listened to both today and loved them equally. Practically every song from last night’s set was on one or the other CD. I often like live performances more than the CDs. That wasn’t the case for Buddy. His music comes across great live, but just as good on CD!

Buddy announced that he’s working on a new CD. Cool, I look forward to getting my hands on it. What a treat to have accidentally discovered him!