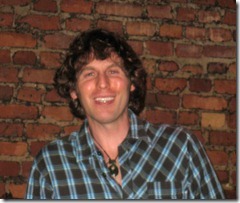 First he connected with Greg Mayo for a duo show, where Greg played piano on some numbers and guitar on others, singing some harmony with Jesse. Next, Jesse had a trio with Jeremy Goldsmith on guitar and harmony.

Last night Jesse used the same percussionist as the previous time (I’ll get to the band in the minute) and replaced Jeremy with a piano player (I believe Jeremy was unavailable, but I think Jesse purposely wanted to go for a piano sound).

I used the term refined above, because I think that Jesse has improved the sound each time and I’m not convinced he needs to tinker with it any further!

Jesse was excellent last night. His vocals are always great, as is his guitar play, but I think he was in a comfort zone with the band as well. Most of the songs were off of his upcoming CD, Empty Seat on a Plane, which will be released in July. There will be a CD Release Show at Rockwood on July 11th, 8pm, be there!

Let’s get to the band. That will also allow me to say a few more things about Jesse’s performance in context. Left-to-right:

Matt Simons on grand piano and vocals. There were two things about Matt’s performance that elevated Jesse’s set: 1) the piano complements Jesse’s already excellent guitar skills better than another guitar (which was great too) and 2) Matt sang substantially more harmony, and was incredible on every song (as he always is). 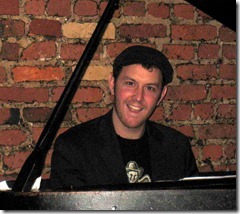 A month ago we saw Jeff Litman on the same stage. I wrote the following:

The test came right away. Jeff opened the show with my favorite song of his, Maine. Let me digress and define what I consider to be a perfect song. If I can put a song on 24×7 repeat, for a year, and honestly not beg for mercy to hear something else, then it’s a perfect song, even if it’s not technically perfect in all respects. Maine is a perfect song. Got it?

Jesse Terry is a great songwriter in general, but he too has written at least a couple of perfect songs (using my definition), perhaps more. Early in the set he played one of them, Noise. His finger picking on that song is extraordinary and last night he was flawless. He started it off solo (which is how he’s performed it most of the times we’ve heard it). After one verse, the band came in.

Aside from the piano and percussion complementing Jesse’s guitar and vocals, Matt Simons’ harmony took an already perfect song and lifted it up even higher. Matt’s vocals were so good on every song that I call this one out mostly to make the point that this song basically couldn’t get any better, and yet it did!

Late in the set when Matt came in on the vocals I turned to Lois and said: “Oh man, they sound exactly like Simon and Garfunkel!”. Not the song, Jesse definitely has his own distinct sound, but their voices blended as seamlessly and beautifully.

Matt was wonderful on the piano as well, so Jesse was right to want to try a piano player when Jeremy Goldsmith was unavailable.

James Williams on cajon and percussion. James played with Jesse at the last show and was fantastic. That was true again last night. I don’t know if he introduced new tricks, if not, at least I noticed them last night. One example: it was the first time I noticed any cajon player striking two different sides at the same time (in this case, the front and back), generating different sounds. 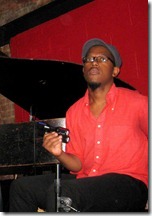 At the last show I joked:

He had something that looked like a giant firecracker on stage. I don’t think he used it. At least I’m still here to tell the tale, if he did…

I realize now that he did use it at that show, but somehow, I missed it. Last night, he used it late in the show and it was one of the most amazing instruments I’ve heard. Basically, it produces the sound of a large cymbal, but without the actual sound of the stick hitting the cymbal. It’s closer to the sound you get when a drummer uses two soft-headed mallets on either side of the cymbal and is hitting it really fast from the top and bottom. Awesome.

He had bells strapped onto his ankles and he had a tambourine under his right foot (so he could create the sound of a cymbal strike anytime he wanted). 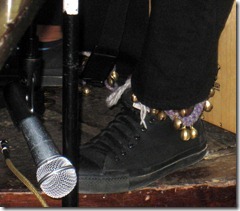 For some songs he put a Swan Percussion Knock Box under his left foot for a full kick drum sound (they are competitors with PorchBoard which I have written about a number of times).

You have to love it when a musician gets exactly the sound he wants from a particular instrument such that when the instrument is falling apart he won’t replace it. James’ other tambourine fits the bill. It sounded perfect last night, but hardly looks perfect. 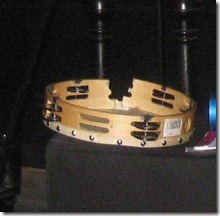 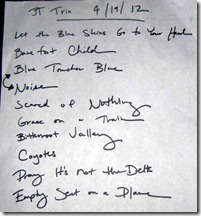 The three of them were totally in sync. I’m very excited for the upcoming CD Release Show and hope to see you there (yes, I’m looking right at you!). 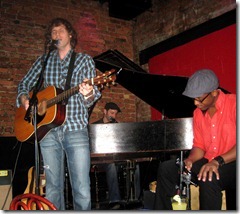 As usual, we were not there alone. Here are some of our friends and other musicians who enjoyed the set with us: 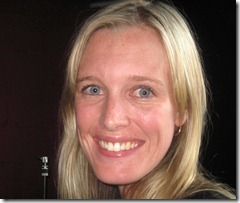 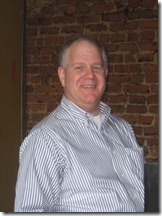 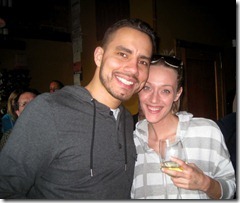 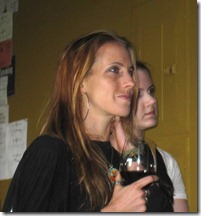 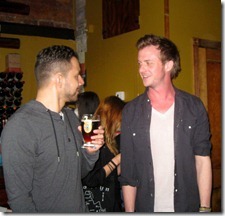