The Grascals at Birchmere

Last night we saw The Grascals at the Birchmere. It was our second time seeing them live. I covered the first time extensively in this post (2/3 of the way down), and all but one comment from that post applied to last night! The one comment that would require updating is that they now do indeed include photos of Kristin Scott Benson on their site. 🙂

So, I won’t repeat it all, but rather, summarize those points as concisely as I can. The three guys in the center of the stage, Jamie Johnson (vocals, guitar and general MC), Terry Smith (vocals and bass) and Terry Eldredge (vocals, guitar and the secondary MC) sang wonderfully together last night: 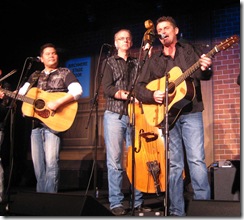 Again, the biggest highlight of the evening was Jeremy Abshire on the fiddle. He’s so fast, and keeps up the speed for really long stretches, that it just doesn’t seem possible. Very close behind him (as I noted in the last post) is the amazing Kristin Scott Benson. I purposely picked seats toward the right side of the stage (normally we aim for the middle) so that I could sit right in front of Kristin, and watch her fingers fly (apparently effortlessly) on the banjo. 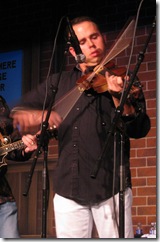 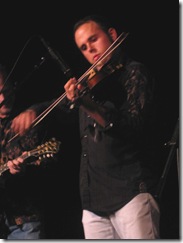 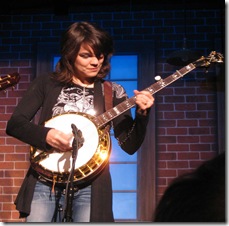 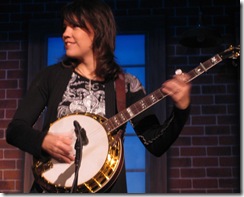 Once again, Danny Roberts was incredible, and incredibly fast as well. He also has a great smile on stage, easily disarming the audience every time he flashed it. 🙂 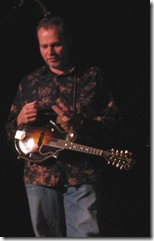 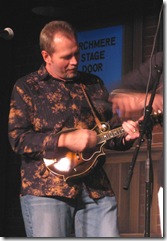 They played an electrifying 65 minutes, then let us know that they would be playing the last song for the night. Given the long opening set (to be covered shortly), we wouldn’t have been too disappointed at the short-ish set that we thought we were about to experience. But, we were wrong.

The last song lasted 10 minutes! It was also the only instrumental number of the entire set. Each of the three brilliant musicians, Jeremy, Kristin and Danny took unbelievably awesome and long solos. Each time you thought they might give up their solo to the next person, they would crank it up again. The audience was in awe.

When they finally stepped off the stage, it was to a standing ovation. They returned shortly, and took a request from the audience for the encore. In total, roughly 80 minutes on stage, each and every one of them delicious.

A month ago I made a mental note that they would be at the Birchmere, but I didn’t buy tickets in advance. As such, I paid no attention to whether there was an opening act, or who it might be.

We attended a Girlyman concert this past Sunday at Birchmere, and while there, decided that we would be up for the 2-hour round-trip drive to return for The Grascals, and I bought two tickets then. I noticed that there was an opening act, and who it was, but to be honest, I still didn’t focus on the names enough.

Either way, I was going…

The opening group was Chris Hillman and Herb Pedersen. The two are life-long friends, and were in The Desert Rose Band together (we loved them!). Chris was also in The Byrds (one of my favorite groups when I was growing up) and The Flying Burrito Brothers. In other words, worthy of headlining any place they would choose, making this an even bigger treat than expected!

Joining them for the entire set was David Mansfield, violin/fiddle, previously unannounced. Of the three, David is by far the best musician. He didn’t sing or speak, but he played superbly on each number. 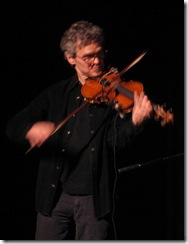 Chris Hillman still has a strong, crystal clear voice, with an excellent range as well. He plays the mandolin solidly (and played guitar on one or two numbers). While Chris is as generous as one can imagine in sharing the spotlight with Herb and David, it’s still clear that it’s his spotlight to share.

He’s warm and engaging with the audience, sharing stories in a self-effacing manner. The bond with his fellow musicians on stage is strong, palpable and enveloping.

Herb Pedersen sang and played guitar, very well (both). His voice is every bit as good in the same dimensions that Chris’ is. The two of them blend perfectly in their harmonies. Given the broad range that both have, typically, whichever one is taking the lead sings lower and the other one takes the high notes. Herb took the lead in a fair percentage of the songs.

They played quite a range of songs, which wasn’t surprising, given their longevity in the business and the great groups they’ve been part of. On the second number in the set they performed Turn Turn Turn! a song that was also the title of the second Byrds album.

They also did a very nice version of Eight Miles High (another Byrds classic). It wasn’t the more rock version that they Byrds used to do, but true to the roots of the song nonetheless, while suiting the style of these three performers well.

They performed a Stanley brothers song, as well as other classics that had the audience whooping it up. They were on stage for 65 minutes (very long for an opening act). They received a rousing standing ovation when they walked off, and could not avoid coming back for an encore (also atypical for opening acts!). So in total, roughly 70 minutes on stage!

After the show, we purchased three more CDs. We already own all three of The Grascals CDs, but we downloaded all of them from Amazon.com, so we didn’t have a physical CD. We bought one of those for all of them to sign (which they did). We also bought a Kristin Scott Benson CD (which she signed) and a Danny Roberts one (also signed). 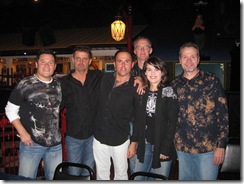 Lois asked Jamie for the set list, and amazingly (they are all so nice it’s hard to describe), when they left to go back to the dressing rooms, he had Terry Eldredge come back out and give it to her. Wow! 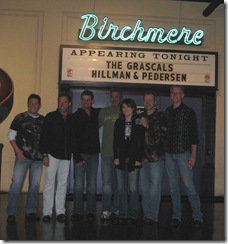 At dinner before the show (I’ve mentioned numerous times how good the food is at the Birchmere!), we had a series of nice conversations with a father and son who sat across from us, and a lovely couple to our right. The six of us passed the time very pleasantly before the show started.

Another fabulous evening out, listening to top-notch Bluegrass music!