Susan Werner at The First Unitarian Society of Westchester

We must have been living under a rock for a very long time, because Susan Werner is exactly the kind of singer/songwriter that we love, and Lois is particularly good at finding them.

On September 20th, 2009 we saw Red Molly at Joe’s Pub and they closed the show with an a cappella version of May I Suggest. We were blown away by the song and the performance. Lois looked it up when we got home and found that it was written by Susan Werner. Even since then, we have been looking for an opportunity to see Susan perform. The opportunity finally came, much closer to home than we expected.

The First Unitarian Society of Westchester holds a monthly music series called Common Ground Coffeehouse. Last night they featured Susan Werner. It’s about a 20-minute drive from our house. The show was sold out. I estimate there were roughly 150 people there, packed into a large rectangular room (like a super-sized living room), with no stage, just a carved out front area with a grand piano and two speakers mounted from the ceiling on either side of the room.

First, the mechanics. Susan Werner performed roughly 70% of the songs on an acoustic guitar (she switched between two different ones) and the other 30% on the grand piano. She’s an excellent guitarist and an even better piano player. 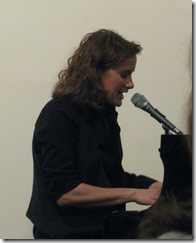 She has a superb voice, terrific range and power. She even sang one verse of one song as Louis Armstrong, and she nailed his voice! 🙂

Susan has a commanding presence (I can’t say on stage because there was none). 😉 She is warm, engaging, funny, moving, in control. The audience was one of the best we’ve ever been a part of. You could have heard a pin drop (well, probably not, because the room was carpeted, but you get my point). 😉 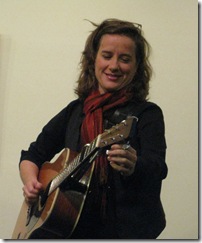 I strongly suspect that they are this respectful for all artists, but Susan commanded and earned the respect, for sure. We’ll be attending other shows in their series, I’m sure, just for the enjoyment of being able to experience a live performance in total peace!

Now for the artistic side of the equation. May I Suggest is a stunning song. Thankfully, it’s but one of many brilliant songs that Susan has written. Susan was introduced by our host for the evening (I think his name was Carter, apologies if I am wrong). He explained that Common Ground hosts a wide variety of music: Folk, Jazz, Blues, Country, etc., and for the first time, we were likely to hear all of them on the same night.

He was right! Seriously! It would be a mistake to pigeonhole Susan into a particular genre. Lois described her (to me) as the Joan Baez of our generation. I don’t disagree, but her musical styles and lyrical subject matter are much more far ranging than Joan’s.

She opened the show with a series of songs she refers to as Agnostic Gospel. I suspect that all but the most fundamentalist religious people would find the songs respectful, even though they raise lots of questions. They’re certainly spiritual, and searching rather than dismissive.

She then switched to the piano and took us in an entirely different direction, Show tunes! She led with Chicago Anyday, an ode to Chicago. After that one song, she returned to the guitar so I assumed the Show tunes part was over. I was wrong. She did an exceptional job of playing two more Show tune style songs on the guitar (I told you, she’s excellent on the guitar). 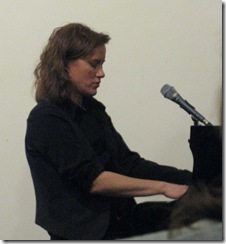 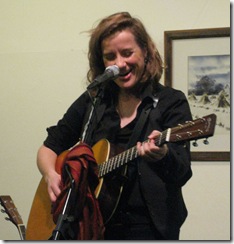 There was a 20-minute intermission, and then Susan returned for another amazing set. The second set had a few more piano numbers, including May I Suggest. Lois cried, as did the woman to my right. A friend of hers turned to her and said “I knew that song would get to you!”, so it apparently was the first time she’d heard the song. 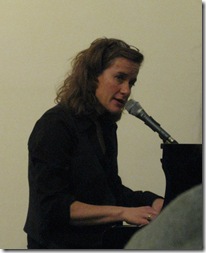 She also sang Barbed Wire Boys that made Lois cry. Susan’s songs are hardly one-dimensional in the lyrics (I hope I’ve already conveyed that the music is highly varied as well). She can tell a story, an anthem, convey a concept, share an emotion, etc. Some are serious enough to make you cry, others are hysterical, and the crowd laughed heartily (simultaneously) quite a number of times (during songs as well as some of Susan’s between-song banter).

She closed the show with three brand-new songs. All were incredible, and we look forward to getting recorded versions of them ASAP. 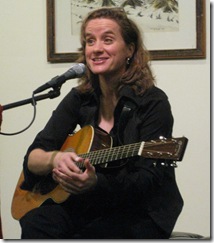 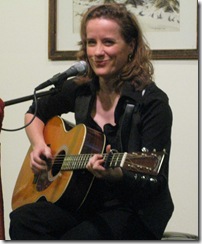 When she was done, the audience gave her an extended standing ovation. She wasn’t going to be able to get out of the building without coming back for an encore, so she did the smart thing. She sang a cover of Wouldn’t It Be Lovely. If you didn’t know the lyrics (is there anyone who doesn’t?), you would never recognize that it was the same song. It was beautiful, but Susan made it her own!

She left to another standing ovation. We headed to the merch table and bought two CDs. Lois was second on line to get them signed. The woman ahead of Lois went to get a Sharpie for Susan, and it took her a while to find one, so Lois got to chat with Susan for an extended period, without being a hog, since Susan couldn’t sign yet. When the woman returned, Susan signed her CD first, then both of ours, and we headed home, floating from a perfect evening.