Almost two years ago, I discovered a duo named Sweet Bitters. Since then, we’ve seen them perform a number of times and have become friendly with both Sharon Goldman and Nina Schmir (also known as Nina Soka).

For many years (at least nine I believe), Sharon has been a member of a female songwriters group affectionately known as Chicks with Dip, more formally known as Maggie’s Music Salon. One of the members of that group is Victoria Lavington.

Victoria is currently undergoing a battle with breast cancer. The Chicks decided to put on a benefit concert for her, and when Sharon announced it on Facebook and Twitter, Lois and I decided to support Victoria and attend.

Sharon Goldman was MC for the night (she also performed a solo) and was marvelous throughout the evening. 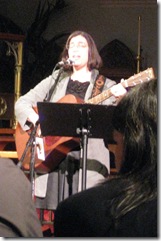 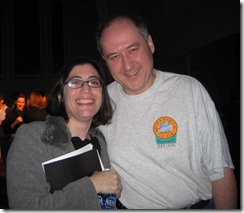 There were two featured performers announced in advance, Red Molly and Natalia Zukerman. One of the members of Red Molly, Carolann Solebello, is also a member of Chicks with Dip. We are huge Red Molly fans (Sharon told me I would love their music the first night I met her, and she was spot on!).

I had heard Natalia’s name a few times, but took particular note earlier this month when she headlined the same bill with The Paper Raincoat (one of our favorites!) up in Massachusetts.

The Christopher Street Coffeehouse is located in St. John’s Lutheran Church at 81 Christopher Street. They highlight singer songwriters on a regular basis, so it was the perfect choice (in so many ways) for this gathering. 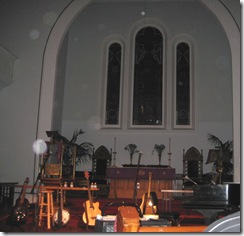 Attendees were encouraged to purchase tickets in advance on Victoria’s site. While there was a suggested donation per ticket, we chose to pay more. I don’t say that to aggrandize ourselves but rather to encourage those of you who can help others to do so in whatever amount you can, not just the minimum that is socially acceptable.

There were excellent refreshments and lots of merchandise (notably many CDs, all of Red Molly’s, Natalia’s new one, Maggie’s Music Salon and Victoria’s). Everything purchased at the show was donated, so 100% of the proceeds went to Victoria’s cancer fighting effort!

Let’s repeat that, because it’s awesome! Not only did Red Molly and Natalia Zukerman donate their time and talent, causing attendance to be larger than it otherwise might have been, but they donated their merch (lots of it!). Further, they didn’t put a price on the merch. Donate what you want/can, and take what you want!

We bought the two Red Molly CDs that we didn’t own already (one was brand new). We bought Natalia’s new CD and Victoria’s as well. Red Molly and Natalia were kind enough to sign our CDs. 🙂

Natalia Zukerman totally captivated us. We’ve added her to the list of people that we will go out of our way to see perform. Simply wonderful. Her voice, music, musicianship, extraordinary spirit and her command of the audience. 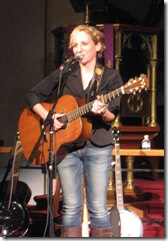 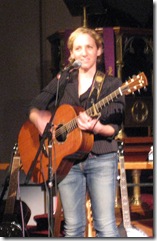 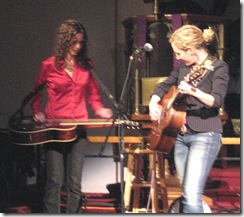 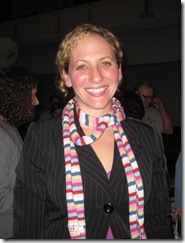 Red Molly are nearly indescribable. In the cab on the way home I was thinking that the three of them control their voices perfectly, individually and blended together. The subtlety of their volume shifts and the tightness of their stops and starts are amazing. Just as I’m thinking this, Lois turns to me and says “Can you believe the discipline that Red Molly has in everything they do, in particular their voices?” 🙂 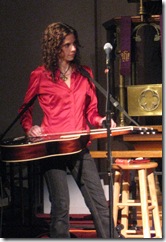 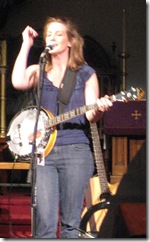 All of the Chicks were wonderful too. They performed Victoria Lavington songs. Victoria writes extremely complex songs, so my hat is off to the Chicks both for attempting these compositions and for pulling them off lovingly and beautifully!

Apologies for the quality of a number of these photos. The lighting was just strange enough that the shots were mostly too dark or too washed out. At least you’ll get a sense of the evening… 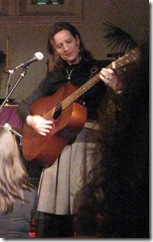 Here are scans of the front and back of the program so you can see what was performed and by whom. Click on any photo in this post to see a larger version:

Susan Lavington (Victoria’s sister) flew up from Washington for the event. She was scheduled to be the opening speaker, but her flight was canceled. Thankfully, she caught another and was only a little late. She gave her wonderful speech right after intermission.

When the performance was over, Sharon introduced Victoria. Victoria gave one of the more moving speeches I’ve heard. Knowing that she was surrounded by friends and loved ones, and knowing that everyone was there to rally around her, with her and for her, she didn’t hold back anything in telling her story.

When she was done, she performed one of her songs for us. Apparently she hasn’t performed in public since roughly 2004. She had a chemotherapy session that day and apologized in advance that it would likely affect her vocal chords (it affects all the cells in your body!). 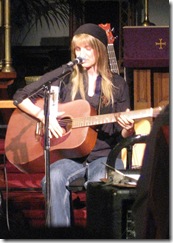 No apologies necessary! Sharon and others had described Victoria’s voice as angelic. Even on the day of a chemotherapy session, that was still true. She also picks the guitar well, making for a very moving performance. When she was done, she got a very long and well-deserved standing ovation.

To top the night off, all of the Chicks, plus Red Molly and Natalia, joined Victoria for an a capella version of another of Victoria’s numbers.

The entire evening was filmed and a DVD will be produced. They were available for pre-order last night for $10. I assume that when they’re ready, they will be available for purchase on Victoria’s site. Please visit there regularly and do yourself a favor and buy a copy of the DVD. Not only will you experience some amazing music, but you will capture Victoria’s speech for yourself, forever. Whenever you need a bit of inspiration, watch it again!

Some of you might avoid these kinds of events for fear that they are downers with a lot of milling about averting your eyes. This is our second such event (the last one was a Livestrong fundraiser for Shannon Black) that I covered in this post.

If you have a chance to attend/participate in the future, go! It’s a celebration. It’s a room full of love. It’s people showing their humanity, the fragility of it embodied in the person needing the help and the wonder of compassion and love in those who rally around them.

That this event happened to be held in a church made it all the more reverent, though the Livestrong fundraiser was in a bar, and I can tell you that it was a spectacular evening for all of the same reasons!

If you have some extra money laying around, and these days, who doesn’t?, 😉 please visit Victoria’s site and donate, even though you missed last night’s wonderful show!