We’ve seen Amy Rivard perform twice before. I covered those in blog posts that you can read here and here. One was a Livestrong fundraiser and the other an intimate set in a small club in Astoria.

Last night was Amy’s official NYC Cabaret debut at the beautiful Metropolitan Room. Here’s what I wrote about her after hearing her sing one song at the fundraiser:

Amy Rivard sang, accompanied by Alex Berger on the keyboards. Before I begin, let me take a deep breath, and say Oh My God! Seriously, Amy has such an extraordinary voice. Alex was worried that Amy might be late, because she was singing the National Anthem at the NY Rangers game at Madison Square Garden last night. Holy cow, I can only imagine how awesome that must have been!

There was no way we were going to miss this show. Amy was on stage for 60 wonderful minutes. In addition to nailing every single song vocally and artistically, she was funny and personable in between songs, setting them up with stories from her travels and experiences around the world. 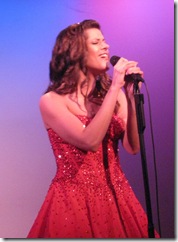 Those travels included long stints with Riverdance and Celtic Woman. She performed in Tokyo Disney (for a year I think). She has her own YouTube channel called Candy Canadiana, where she shows off her comedic talent and creativity.

Last night’s show was a typical Cabaret, which I define as theatrical in nature (most of the numbers could be from a Broadway show). There’s generally a loose thread that moves you from one song/mood to the next, with stories explaining the shifts. There is a certain amount of acting/emoting during the songs, not just singing. 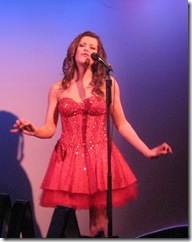 Everything in the above paragraph plays to Amy’s strengths. She is one of the most incredible singers you will ever hear, but she can act, tell a story, move gracefully (though she poked fun of her dancing ability) and she can certainly make us laugh. 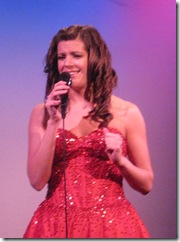 She performed 13 numbers that ran the gamut from slow blues to the Mr. Softee song (no kidding, we all had to sing along with her during the last verse, she printed the words out for the audience) to opera! 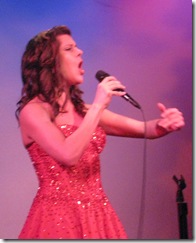 The first song we heard Amy sing was Taylor the Latte Boy, a song made famous by Kristen Chenoweth (one of our favorites). Last night, she sang a different number that Kristen does, The Girl in 14G. If you watched that Kristen YouTube video, then you understand my reference to Amy singing opera. She nailed it, just like Kristen does.

Amy sang one of her own songs as well, A Best Friend in Me (yes folks, she also writes some of her own material!). She sang a medley from the Sound of Music. Punctuated in that medley were a bunch of sharp barbs (both sung and spoken). 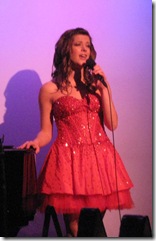 Because Amy knows us (I’ll finish this post with how that came to be) she waved us in during her sound check (we always show up early). We heard bits of the Sound of Music medley without hearing the story introducing it. The snarky bits didn’t make sense to me whatsoever. During the show, when she set the context, it all made perfect sense and was another of Amy’s masterful performances.

That Amy isn’t starring in a top Broadway musical is a loss for all of us, mostly for whatever producer isn’t aware of what she would add to their production! We’ve see Wicked eight times. Eden Espinosa played Elphaba two of those times. She was perfect. We then saw Eden in a Cabaret show at Joe’s Pub (covered here). She didn’t deliver anywhere near the quality experience in a Cabaret show that she did on Broadway.

I would love to see Amy in the Elphaba role, so that I can prove (at least to myself) that she can cross over from perfect in a Cabaret, to perfect in a starring role on Broadway. Now, someone needs to make that happen for me, pretty please?

Ross Patterson accompanied Amy on the piano. He is an extraordinary pianist. He had to play as wide a range as Amy had to sing and was amazing throughout. He has accompanied the likes of Julia Murney as seen in this photo. He also plays regularly at Metropolitan Room, with his own band and accompanying others. Catch him if you can, he’s a complete delight in every respect. 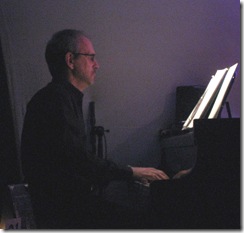 A Frenchman named JP did the lights and sound. I can honestly say that it was the best job of lighting I’ve seen in a club setting. His fade-outs and color changes complemented and enhanced the performance.

After hearing Amy the first two times, I reached out to her to ask if she would lend her voice to a project I produced for fun, a Tonight Show Tribute Song. I wrote the lyrics, Ben Schwartz wrote and performed all of the music and Amy Rivard sang, making us look good. 🙂

One response to “Amy Rivard at Metropolitan Room”