Jesse Terry and Marjory Lee at a House Concert

We became aware of how many house concerts there are only a few years ago. There have been a few that we really wanted to attend, but scheduling or illness confounded every one, until last night.

Our friends (stay tuned for how we met them at the end) hosted a house concert featuring one of their favorite artists. We were thrilled that we were able to attend.

Jesse Terry is an incredibly talented singer/songwriter/guitar player. He was (until recently) based in Nashville. That might make you think he’s pure country. You’d be wrong. He crosses a number of genres, effortlessly. During one song, I could swear I was listening to James Taylor (the feel, not a clone). On another, Lois leaned over to me and whispered “Jackson Browne”. Oh yeah, he’s also a little bit country. 😉

Lois described Jesse to me as “a painter and a poet”. Poet is obvious, but by painter, she meant that his lyrical imagery is vivid. She cried during two of his songs. Here are YouTube videos of each:

Not to overwhelm you with YouTube videos, but this one is worth watching as well (then I’ll leave you alone). Jesse met his fiancée on a cruise ship in the South Pacific (I’m sure the setting had nothing to do with their falling in love 😉 ). Back in the states, in the famous Bluebird Cafe, she was in the audience when he sang this song (which he wrote for her) and then proposed to her in front of the audience. She was at the house concert last night and is as lovely a person as you can imagine, so we completely understand their mutual attraction/admiration/love: 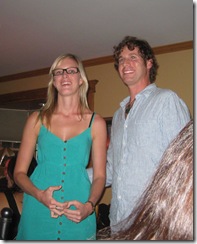 Jesse was wonderful on every song (including the three covers he did), but he’s particularly masterful at love songs and deeply sad ones. He tended to finger-pick the slower ones, beautifully. His guitar play in general was very good. His voice is excellent with good range. Excellent personality (both on and off the stage).

While we attend shows in all types of venues (including the dreaded Madison Square Garden), we really prefer intimate shows. Well, last night redefined intimate (in the best possible way). I often mention that a performance was acoustic. That’s technically correct, but in most cases, while the instrument is acoustic, it’s still amplified.

Last night was 100% acoustic, and the vocals weren’t mic’ed either. We had front row seats, but I’ll bet that the one guy who insisted on standing in the back of the room (yes, he was offered a seat), could hear every note and every word as perfectly as I could. Perfect. No sound engineer to muck it up (don’t jump on me, most do a great job, but some screw it up so bad you wonder how they got the job).

I was nervous for a second, because Jesse plugged a cord into his guitar, so I thought he had a small amp tucked away somewhere. It turned out he was just plugging in to an auto-tuner pedal. Whew. 🙂

I’ll come back to the actual ending of the show after I cover the opening act.

Our hostess for the evening is an incredible woman (her husband is awesome too, but what I’m about to tell is all her, so I want to give credit where credit is due!). Years ago, she discovered Jesse Terry accidentally, on MySpace, clicking on his link from another artist’s page. She instantly fell in love with his music and reached out to contact Jesse. She has followed his career and become his friend ever since that fateful night.

While in Key West for the annual singer/songwriter festival, she discovered the woman who opened for Jesse last night. She befriended her as well and told both of them that they needed to meet and get to know each other. That eventually happened, and our hostess was indeed correct, they became friends. That they ended up playing a show together, in our heroine’s home, was beyond fitting!

Marjory Lee sang and played acoustic guitar (as above, 100% acoustic, with Marjory even tuning by hand, shudder 😉 ). Our friend warned us about Marjory’s voice and she was correct. It’s gorgeous! Power when she wants/needs it, subtlety when that’s called for, range and perhaps most interesting, an ability to change styles and gears effortlessly. 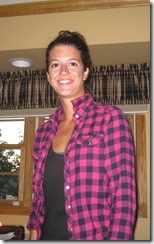 Marjory was equally at home singing softly in the upper registers as she was belting out a soulful rendition of The Dock of the Bay, adding a gritty gravelly voice, sung in the lower registers.

She accompanies herself very nicely on the guitar. Completing the package is her stage presence. For such a young woman, she has an easy rapport with the audience. As with Jesse, that’s true both on and off the stage. 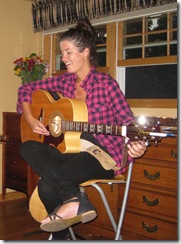 Circling back to the end of the show. During both of their sets, a number of people called out for them to sing a duet. They each joked that they had planned to work up something together for quite a while, but never got around to it. That (apparently) didn’t let them off the hook.

When Jesse was wrapping up, people again called out for them to do something together. Marjory joined Jesse and they sang The Dock of the Bay (mentioned above) alternating verses, with Marjory occasionally venturing some harmony on top of Jesse (very well done!). 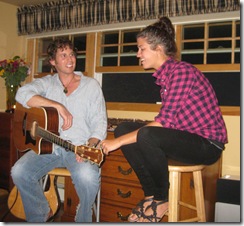 Then Marjory sang Michael Jackson’s Billy Jean with Jesse singing a few key parts. As with another cover that Marjory did during her own set, she successfully got most of the audience to sing the chorus with her. She/they did a great job bringing the evening to a wonderful close.

We purchased both Jesse and Marjory’s CDs.

Here’s Jesse’s Set List, not followed to a T: 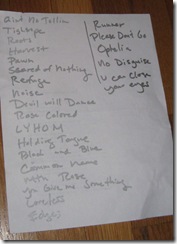 Back to how we met our friends. We’ve been to 13 CMA Writers Series shows at Joe’s Pub. CMA = Country Music Association. I wouldn’t be surprised to find out that our friends have seen more of them than we have. In all of our times at Joe’s Pub, we have always been seated at a table for two, or at a table for four, but with the other two people attending with us.

The one exception was one CMA show where we were seated at a table for four next to this couple that we instantly had a rapport with. The next time we attended a CMA show, Lois spotted them on line and called out for them to join us. We sat together while we ate, but ended up watching the show from different spots. Ever since then we’ve maintained an active email and Facebook friendship.

Last night was excellent, but I can’t say that I didn’t feel badly or guilty. We paid way too little for the value of the show, even after buying the CDs. But that’s not the bad part. Our hostess cooked for two (or three?) days. It was one of the most incredible meals I’ve ever had. The meal alone was worth more than we paid for the show and the CDs, but of course, it was free. Guilty pleasure. All I can say is that I was not even slightly exaggerating when I told our friend that she should be a professional caterer. Awesome! 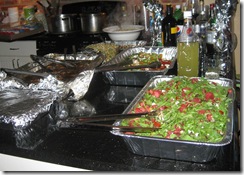 There were a ton of desserts as well. I grabbed some (store bought, but also incredible) but we didn’t hang around. During the intermission our host asked me if we were driving back to the city after the show. He asked whether we could take Marjory (and her friend) back with us, which we were delighted to do. Another friend of theirs took the train out from Manhattan so we took her along with us.

Having another hour to get to know Marjory and her friend only cemented our feeling that she was a very special person (all three of our passengers are!) and it enhanced an already special evening all the more. 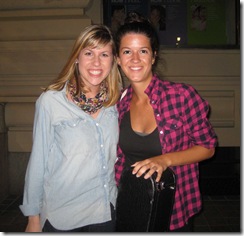 In a not-so-small irony, we are already scheduled for our next house concert this Thursday (from zero to two in five days). This time, in a complete stranger’s home, so we’re branching out. I’ll report on that on Friday, as usual.