Last night we attended our second ever house concert. I can easily see this becoming a habit. I started this blog 3.5 years ago with one goal in mind, document our lives so that as our memory fades (inevitable) we will have a permanent record to reflect back on.

A completely unexpected side-benefit has been the incredible people that we’ve met (both virtually and IRL: in real life) as a result of this endeavor and the heavy emphasis on blogging about musical events.

One person who I met through this blog (IRL, before he ever commented on the blog!) alerted me to someone who runs regular house concerts on the upper west side in NYC, telling me specifically about last night’s show. The host was kind enough to reserve two spots for Lois and me.

Antje Duvekot opened the show. We weren’t familiar with most of her work, but the very first time we saw the Bank of America commercial featuring Merry Go Round (written by Antje), we fell in love with the song. I was excited to hear more of her music live for my first impression. I’m now officially a big fan of Antje (personally) and her music.

Six weeks ago, Antje took a serious tumble off her bike. She broke her hand and shouldn’t have been playing guitar yet. She joked that none of us should be telling her hand surgeon that she was disobeying orders. Here’s hoping that my blog isn’t popular enough to be read by him/her. 😉 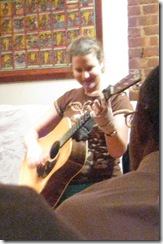 Even with a cast on, her guitar playing was beautiful. Her left pinkie was effectively immobilized (she didn’t use it all in the first set and barely did in the second). She finger-picks most of the songs and I look forward to seeing her again when she can use all of her fingers (though I wasn’t disappointed in the least in her delivery last night!).

Antje has a broad vocal range. For me, in all of my two experiences of a house concert, I don’t think you can properly judge a singer’s voice at the extremes in this kind of setting. For some, to hit the high notes, they need to belt it out. It’s obvious that they don’t want to overwhelm the small, close-in crowd, so they clearly pull back. I don’t know whether Antje was pulling back, or whether that’s how she normally sings the high notes.

In general, there is a smokey quality to her vocals.

She’s mostly hard-core folk (one of my favorite genre’s for over 40 years!) and she’s extremely good at it in every respect. She also did a Jason Mraz cover and her own Merry Go Round isn’t really folk either. She closed her part of the show with Merry Go Round. So great to see that live after being a fan of the song from the minute it was released.

Antje’s personality comes across wonderfully. Sweet, self-effacing, interesting, funny, warm (and probably a few other nice adjectives). She opened with an a capella number (which gave her an opportunity to showcase her cast). In my opinion it was a difficult and dangerous thing to do in such an intimate environment. She won me (and I’m guessing nearly everyone) over within the first verse!

Anne Heaton was the other headliner. We had not heard of her, but after mentioning her name to a few musician friends, all we heard were raves! Anne sings wonderfully and plays the keyboards really well. Her style is mostly Jazz so the contrast between Antje and Anne was big. 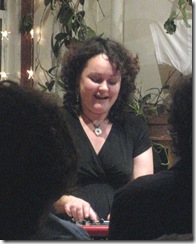 Not to be outdone by Antje’s obvious handicap, Anne topped her, by showing up 8.5 months pregnant! 😉

Her (understandable) obvious discomfort was made even clearer when she shared a huge scare that she underwent just two days earlier. In addition, she told us that the baby was pressing on her lungs. Yikes!

With all that, her vocal control and range were superb. I like Jazz in general (though I lean toward the instrumental smooth jazz variety), so I enjoyed her numbers, but it’s not typically the kind of stuff that makes my heart flutter.

She played a whimsical number that she wrote as a bridal toast (she was maid of honor) for her childhood friend. I loved every second of it (delivery, lyrics, style). The crowd loved it too, as many laughed throughout the song.

During the first of two sets, Antje played the first six songs (roughly) and Anne played the next six. But, they joined each other on at least four songs to harmonize (they do a lovely job, since they also perform together as part of Winterbloom). For the second set, they both remained on stage (in front of us) throughout, alternating songs, again harmonizing frequently.

Anne also has a wonderful stage presence. Obviously, the topics last night trended more around her current condition, but it’s clear that she can handle any audience in any situation.

I would guess that there were roughly 50 people in attendance. The hosts ran the evening as well as I could have hoped. There was beer/wine/cheese/cold cuts/soft drinks/fruit/etc., spread out in multiple spots so there were no long lines anywhere. They are delightful people who have found an incredible way to share their love of music while getting to experience it themselves in the best possible way!

I was sorry to run out the minute the show was over, but we were heading straight to the house and wanted to get on the road.

2 responses to “Antje Duvekot and Anne Heaton at House Concert”