This show was announced over six months ago and the minute it was, I grabbed tickets. It was a long wait and it was well worth it. We even got to see Girlyman three weeks ago in Birmingham, which only enhanced our anticipation of last night’s show.

It is the rarest Girlyman show that we attend alone. We want to share our joy and grow their fan base whenever we get a chance. Last night was no exception. We had a party of seven, four of whom were experiencing Girlyman and Red Molly for the first time.

Girlyman opened with an energetic Paul Simon cover. This already set the tone for an unusual evening. I don’t think that in the nearly 20 times that we’ve seen them perform they’ve ever opened with a cover. Lois and I are sensitive to the opening song (of all bands that we love, not just Girlyman) because it often determines whether newcomers are leaning forward or backward for the rest of the show. So, opening song jitters overcome with flying colors (ours, not theirs), check!

My next fear was locale-based. City Winery is beyond gorgeous. The food and wine are excellent. The sound is generally excellent too. But, the place is large and many people sit at the bar or off to the opposite side of the stage. Every other show I’ve been to at City Winery has had too many loud talkers during the sets (amazing sets at that!). It distracts from the show.

Thankfully, even though the place last night was packed, it was full of Girlyman and Red Molly fans. That meant whisper quiet during nearly every song, and raucous noise between them. Exactly as it should be! Venue enhances show rather than distracts, check!

Any additional fears to overcome? Nope, good, only enjoyment left. One last note, earlier this week someone adjusted Lois’ camera in order to take pictures of some close up items. Lois didn’t readjust the settings, so nearly every photo she took last night was blurry. I’ll post a very few just to give you a sense of the layout. The camera is now back to normal.

Girlyman has such a large catalog to select from. They mix it up frequently, which is one of the reasons that seeing them often is invigorating. Of course, it means that something you’re desperately in the mood for on a given night might not be delivered. No worries, the entire catalog is fantastic.

The tuning songs last night weren’t quite up to par (less rhymes, shorter, fewer), but the general banter and interaction among the band was superb. I had the warm fuzzies throughout the set.

When they got to the request section, it was complete bedlam. It sounded like 200 of the 300+ people there were screaming at the same time, at the top of their lungs. I can always make out at least a dozen distinct titles being yelled at any show. I couldn’t make out a single title last night, because I think that over 50 songs were being yelled out.

The band didn’t seem to hear them either. When there was a break for a second, quite a number of people coordinated their screams for Everything’s Easy (the title track of their latest CD). The band seemed willing to play it, given that it was the only one they could be sure of.

But, in another clever, coordinated, premeditated move, a handful of people sitting right in front of the stage held up sheets of paper with the word Angel printed on them. This created a memorable set of events.

Angel is one of Doris’ new songs on the latest CD. It’s a beautiful song and I understand why this group came prepared to lobby for it. But, it’s one of the few songs in Girlyman’s catalog that they haven’t practiced together in a while. They were checking with each other on the stage whether any of them remembered it well enough to perform it. No one (including Doris) exuded confidence!

It was impressive that they love and connect with their fans well enough to at least try performing the song. There were flubbed chords and a few missed words as well, but it still sounded great and showed their courage to deliver what people wanted to hear rather than just what they could guarantee would be a flawless performance.

What makes it more impressive is the fact that Girlyman returned to offering live recordings of last night’s show after stopping the practice over a year ago (we cherish the many live shows that we purchased from them). As they noted on stage, anyone who wanted to listen to them butcher Angel over and over could now do so, by purchasing last night’s show. We do, so we did!

Rather than leave it at that, they also performed Everything’s Easy, ensuring that one of the requests was performed as people expected it.

They introduced two new songs, one of which we heard in Birmingham (and fell in love with instantly). That one was The Person You Want (Me to Be) by Ty. The other, which they said was only the second time they’ve performed it, was Supernova by Nate. Supernova was a big hit at our table!

They closed the show with Postcards From Mexico in the same fashion that they did in Birmingham, but the size of the crowd at City Winery made it more of a spectacle (in the best sense of the word). They split the crowd in thirds, according to vocal range. We sang the chorus with them. It’s complicated, because the three parts have different words and different melodies (they don’t all start on the same beat either!). It sounded pretty darned good from where I was sitting. When I get my live CD in the mail, I’ll get a better sense of the full effect.

They performed a one-song encore, bringing Red Molly out to join them for Through to Sunrise. Cool! Five part harmony on one of our favorite songs (Abbie Gardner of Red Molly didn’t really join in the singing, but she played a mean Dobro solo that was double the normal length of the traditional Banjo solo that Doris plays). Bravo!

In total, they were on the stage for just under two hours, a super healthy (and welcome) set, considering there was a top-notch opening act as well. They correctly thanked City Winery for allowing them to do that!

We also count Red Molly among our favorite performers. Earlier this year, they decided to start touring more and that caused Carolann Solebello to leave the group (in July). Some groups can’t survive the transition to a new core member. 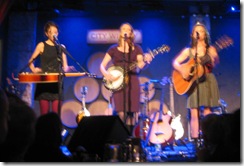 In a not-so-small irony, the group selected Molly Venter to join them. (Get it? Red Molly now has an actual Molly in the band?) 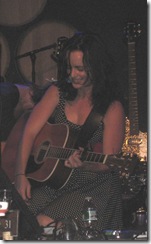 I’ll admit to being a bit nervous as to whether the character of Red Molly would remain intact, even if Molly Venter was a talented solo performer. That remained true even though someone I trust told me that she knew Molly well and that she was very much up to the task.

She was and is! Molly has an excellent voice, plays the guitar well and her voice blends beautifully with Laurie MacAllister and Abbie Gardner. She also brings her songwriter cred to the group, something that I think will be a big win for Red Molly (who performs more covers than most groups that we like this much).

The first of the new songs is a lullaby written by Molly Venter which was amazing. I definitely need a recording of it, STAT! The second is a song she recorded on her own in 2008 that Red Molly has arranged for their trademarked three-part harmony. Gorgeous!

Thankfully, their 40 minute set included the ever-heavenly a capella cover of Susan Werner’s May I Suggest. If any song would be the test of Molly Venter fitting in, that would be it. Check (again).

We arrived at 6pm to enjoy a terrific meal, including City Winery’s own wine. It’s exciting to sit at a table of vegetable lovers. We had two orders of the brussels spouts (yes, we all loved them!) and the cauliflower was heavenly too. Main dishes were all devoured as well.

We hung around after the show catching up with the band, getting their updated poster signed by all and mingling with friends who also attended the show. Another amazing evening in the books, more on the way (including tonight).

2 responses to “Girlyman and Red Molly at City Winery”