Last night was my fourth time seeing Derek James and the Lovely Fools. Each setup was different (last night was no exception) and only one of them was disappointing (hint: not last night). The show was at Rockwood Music Hall.

There are many bands that create a party atmosphere. In many cases, it depends on the circumstances (the audience, venue, mood of the band, etc.).  Then there are bands where the music itself is a party! Derek James and the Lovely Fools are at the head of the class in that regard. 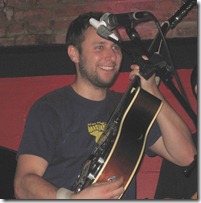 In less than 10 notes (seriously), it’s nearly impossible to avoid: smiling, tapping your foot, bobbing your head and swaying your body. I dare you to show up when they play and prove me wrong!

Derek will be releasing a new CD this fall. I am praying that at least 20% of this magic can be bottled, so that I can party at will just by turning on my iPod. I’m hopeful! I can wager a ton that even if it’s perfect, it can’t match a live show. There is so much visual fun going on that simply can’t be reproduced on a CD. So, get the CD when it’s available, but get yourself to a show as often as you can, it will never get tiresome (that’s another promise I can safely make).

I’ll run through the band and mention what was different this time, then wrap up with a few complaints (which only means it could have been better, not that it wasn’t great!).

Derek James on vocals, acoustic guitar and kazoo. What can I say, Derek is obviously Mayor of Funtown. A winning/impish smile, fast rhythm guitar, very tasty leads (usually in 100% unison with the bass, lead guitar or both!) and a southern twang on his vocals (I don’t think he talks like that) that can charm your pants off (well, if I wasn’t taken they could).

Derek didn’t play the ukulele last night. It wasn’t missing, but it was still somewhat missed. 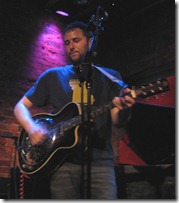 Roy Gurel on electric guitar and vocals.  Roy was in Israel for over six months. He was not at the last show, which largely accounted for the only disappointing effort. While Derek was Derek that night, the Lovely Fools were talented, but not so Lovely. Roy is an exceptional guitarist. The last time I saw him, I described him as my second favorite local guitarist behind Greg Mayo.

Last night Roy was wonderful, but not quite as good as he’s been in the past. I’m not complaining, but since I’m ranking people anyway (for my own memory) I’ll say that he’s now third, behind Greg and John Kaiteris of Live Society. Roy could work his way back up a notch, but I am doubtful (on his behalf) that he will be able to top Greg. Here’s hoping he takes up the challenge!

Assaf Spector (Assie) on electric bass, vocals and kazoo. Assie also missed the last show, make a clean sweep of me missing the truly Lovely Fools. Last night Assie was spot on, in every respect, back to a typical Derek James show. In addition to his incredible bass playing, wonderful background vocals and all around fun attitude on stage, he added a kazoo to the mix. Derek always plays a kazoo, but having two of them played on stage at the same time added to the carnival atmosphere. 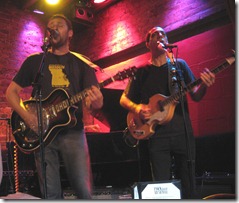 Now to the additions (re-read the title!):

Greg Mayo on keyboards (I only heard electronic/organ ones, but he was sitting at the grand piano, so some of the piano-ish sounds might have come from that). I don’t know if Greg sang, since he was blocked by Derek the entire set from where I was sitting. I admit to feeling a little guilty noting that Roy’s play slipped a drop while realizing that Greg was sitting two feet behind him. I hope I get over it.

Greg took a few very tasty leads, but they were extremely short (more like quick riffs than real leads). I’m guessing/hoping that he’s new to the band, and if he plays with them more, they’ll work on arrangements (and visual cues to each other) to have him play a bigger role. This was the first time we’ve seen keyboards added to a Derek James set.

Kenny Shaw on drums. It seems that we see Kenny more often in the past few months than any other drummer. That’s fine, he’s great. But, as with Abby Payne’s set last week, if the band plays really loud (and they did), Kenny can match them, making the drums a bit too loud as well. 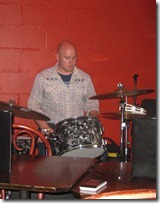 The show was fantastic, so you can stop reading now if you don’t want some negativity in your lives.

I’m coming to the (very unfortunate) conclusion that Rockwood 1 is simply not a good place for a highly amplified set (though I admit that I’ve seen a number of shows where it wasn’t a problem, including last week’s Greg Mayo set). In addition to the electronic keyboards being amplified (obviously), there were three separate amps on stage (Roy’s electric guitar, Derek’s acoustic guitar and Assie’s bass). That’s what caused Kenny to strike the drums really hard.

It’s not entirely the sound guy’s fault, since the amps are controlled directly by the players. Someone in the audience called out that Derek needed to turn up his vocals. They may have tried, but it didn’t make a difference. Derek responded that it’s hard to tone down the volume when the band is 1/2 deaf. He added that even if Roy crawled inside his own amp, it wouldn’t be loud enough for Roy’s taste.

That said, all of the vocals could be heard reasonably well (as instruments), but on the faster/louder numbers (the majority), the lyrics were really hard to make out (unless you know the song well). From a party point of view, no biggie, the party was just as much fun. From a “Derek might be singing something interesting” point of view, not so much…

So, no one instrument overwhelmed the others (the sound was nicely balanced), but together they were all too loud (not painfully so!).

Let’s finish by repeating the more important points: great show, great new additions to the band, awesome to have the original Lovely Fools back!