I listened to both artists and thought I would have enjoyed either set. I liked the Rockwood person more. My only hesitation was that it was listed as a 2-hour set (rare at Rockwood 1), and I didn’t want to have to bolt mid-set. Still, I was intrigued as to how good he might be knowing they were giving him the full two hours.

Richard Julian sings really well, plays the guitar beautifully and is accompanied by an amazing band. He played mostly originals along with some covers. He has a mellow but engaging stage presence. He also has a loyal fan base, the place was packed and as respectfully quiet as you cold hope for. 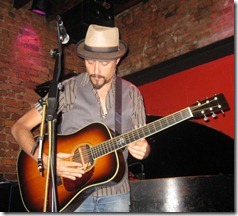 It’s a mostly jazz style, but the songs varied quite a bit to hold our interest on every single number. 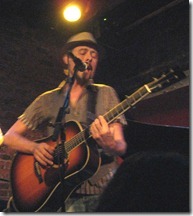 His band, left-to-right on stage:

J. Walter Hawkes on trombone. He was great on every number. I don’t typically think of Lois as someone who would rave about a trombone player (I have no idea why that’s true, but it is), and yet, when we left, she couldn’t stop raving about J. Walter (or do I know him well enough to call him J. yet?).

Tim Luntzel on electric bass. Tim was beyond amazing (bamazing?)! He sat on his amp and just crushed the bass, appearing to not even break a sweat. One of the great things about most jazz sets is that the volume is down, but balanced so well that you can actually easily pick out every note on every instrument. Watching Tim’s fingers fly on the bass was also a treat.

One of the things I like about blogging about every single show, coupled with the fact that we see so many shows is that every once in a while, I find a nugget in my own posts that either brings back a wonderful memory, or gives me a new perspective on an old one (that I often didn’t recall until I searched my own site!).

I didn’t remember Tim Luntzel’s name when I typed it above. But, my blog-writing software (Microsoft Live Writer) did, and immediately created a link. That meant I’ve blogged about Tim before. I couldn’t believe that someone who blew me away faded from my memory. I looked it up and saw that Tim supported Greg Tannen at Hiro Ballroom. Here’s what I said about him that night:

Tim Luntzel on electric bass. Tim did a nice job, not highlighted much.

Ah, “not highlighted much”. Too bad! I could have known then that this is a guy I needed to follow (yes, I just started following him on Twitter a minute ago!). You can rest assured I won’t be forgetting his name going forward (I knew you were worried!).

Dan Rieser on drums. That link isn’t to Dan’s site (I couldn’t find one), but rather to someone who wrote a blog post about Dan, raving about him. Please allow me to bow to that person, who clearly knows way more about drums than I do, for doing a better job of explaining to you how excellent Dan’s drumming is.

On one song he did something I’ve never seen. He had two drum sticks in each hand, split into reasonably tight V’s. I can’t say that I heard anything particularly different than just a normal pair of sticks hitting the drums and cymbals, but it certainly was visually interesting.

The real key here is that Richard Julian surrounds himself with great musicians, which enhances the experience of seeing him perform dramatically.

I can’t tell you how ambivalent I was about leaving early (recall, Richard had a 2-hour set, but we were committed to another show half way through). I didn’t really know the other group, but I knew that staying at Rockwood for another hour would be blissful.

My next post will reveal whether leaving was a huge mistake or not. Either way, Richard Julian, J. Walter Hawkes, Tim Luntzel and Dan Rieser are all on my make sure you see them list! That made staying at Rockwood absolutely the correct decision!