Rachel Platten, Bess Rogers and Bethany and the Guitar at Ebenezer’s Coffeehouse

We’re nearing the middle of a two week hiatus from NYC music. We’ve already missed some very special shows and will be missing a few more before we get back on the horse.

None of that mattered, because I thought I was going to see a night of Musical Mud Wrestling starring two amazing female singer/songwriters, Rachel Platten and Bess Rogers at Ebenezers Coffeehouse: 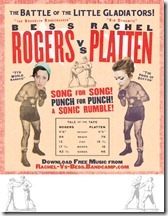 OK, you’d think it was billed as a topless boxing match from the above poster (not that there’s anything wrong with that!), but I chose to believe they wanted to leave the image of them mud wrestling to the imagination. Note that in typical female fashion, the poster doesn’t include their weight (click on it for a larger version!). Bess only fueled the image with this tweet:

June tour with Rachel Platten! Come watch us fight to the finish!!http://fburls.com/46-mnKKwbgC

Before you head out to see them on this tour, let me assure you, it was all a lie. The only thing you’ll see/hear if you attend one of their shows is awesome music (and you might laugh a bunch as well, but that’s it!). Seriously, I could have stayed in NYC for that instead of driving to DC to catch this show.

In my typical fashion, I’ll cover the acts (there were three) in reverse order.

Rachel Platten was up last. She very recently released a CD called Be Here. Get it, listen to it, fall in love with it. 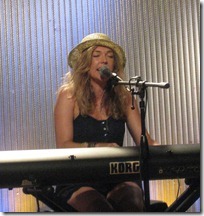 Rachel performed at least six of the songs from the CD last night and one or two songs I never heard before (always a treat). Rachel always delivers the goods live, in whatever configuration she chooses. She played one song solo, the rest with her band, and a few also had Bess Rogers singing harmony with her.

Bringing Bess up led to a number of funny lines, including the only thing that could be confused for delivering what the Poster (and tour name) promised! Rachel also sang harmony with Bess on a few numbers during Bess’ set. When Rachel took the stage, she commented that it’s much easier to think of things to say to the audience when it’s your own set and how you just look and sound goofy (not the word she used) when it’s someone else’s set. 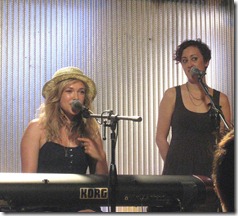 Of course, she said that exactly as Bess was settling in behind her mic. Everyone erupted in laughter (including Bess and Rachel), since it seemed like she was challenging Bess to say something clever, right then and there. 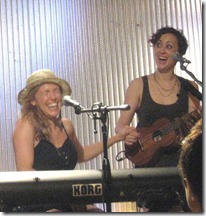 In addition to having a great voice and writing great songs, Rachel is also superb on the keyboards. Last night she intro’ed one song with an incredible solo (mostly classical style, with fingers flying the length of the keyboard). She had a number of mini-solos, all filled with razzle-dazzle. 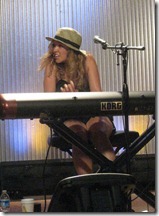 Backing her up on all but one number were:

Martin Rivas on acoustic guitar and vocals. I was surprised that Martin played and sang. I expected him to be the referee for the fight. Oh well, we had to suffer his wonderful voice and guitar playing instead. Perhaps next time! 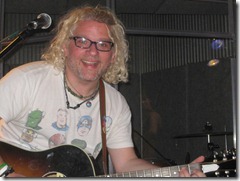 Craig Meyer on drums/percussion. Craig always does an amazing job, whether he’s playing with a full drum set or hitting his leg with brush sticks (yes, he did that last night during one song!). Rachel highlighted him giving Craig an intense solo, but to be honest, Craig generally is a highlight reel (in the best sense), whether he takes a solo or not, at each show. 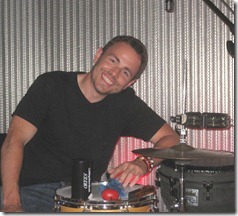 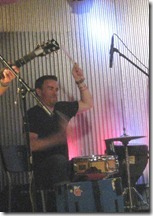 Behind Craig was a full drum set, in one of those glass cages you often see at a giant show (MSG, etc.). It would have been interesting to see him wail on that for a bit. That too will have to wait for another time. 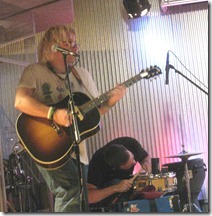 I include the set list here, but Rachel didn’t follow this to a T, even though it was sitting on the floor next to her. Specifically, she opened the show with Nothing Ever Happens, which appears second on this list:

Bess Rogers had a similar setup to Rachel. She played one song solo (on acoustic guitar). For the rest, she was accompanied by Martin and Craig. She performed most of them on acoustic guitar, but switched to ukulele for a few. Rachel sang harmony on a few numbers and played a bit of keyboards on one. 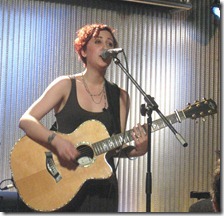 Not to be mistaken for a cool person, Bess paired a glockenspiel on one of the numbers that she also played uke on (the one Rachel played keys on). Bess pointed out that if you’re going to be a Nerd (and she considers herself one), then by all means, pair two nerdy instruments in the same song. 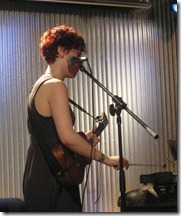 To be honest, I felt a bit cheated on another score. Bess bought (and apparently mastered!) a new Omnichord. I was hoping she would break it out at this show. Alas, she did not…

Bess has an exceptional voice, with incredible control to boot. It was evident on every number except the very first one. We couldn’t tell why the sound engineer wasn’t boosting her mic during the opening number. We also weren’t sure whether Bess even knew she was sounding soft to us (since her monitor might have been fine). 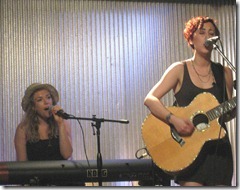 Thankfully, the minute the song was over she switched mic’s with Rachel, saying that for whatever reason, the one she had was simply too soft-sounding. Whew. Everything was perfect (sound-wise and voice-wise) after that!

Bess played a few from her latest EP (released in 2010), including the opener, Come Home and Favorite Day. In introducing Favorite Day (a song about her now-husband, who was only a boyfriend back then), Bess made someone named Courtney (in the audience) promise not to tell Chris Kuffner (her husband) that she shared the back-story/motivation for the song. Since I didn’t sign any legal documents and Bess didn’t admonish me personally, I’m mentioning it here.

Bess played an older one (from her first CD, released in 2007) with an updated arrangement. I’m mentioning these because we didn’t snag a set list for Bess (not that I noticed one on stage). She also played a couple of new ones that will be on an upcoming CD that was funded (extremely successfully!) on Kickstarter. Congrats Bess, we’re waiting (semi-patiently) until we all get to enjoy it!

While Martin played normal guitar and sang harmony with Bess (wonderfully), he also played the acoustic guitar as if it was a bass on a couple of numbers, to excellent effect. Nicely done Martin!

There was an opening act for the evening, someone we never heard of before. While some opening acts don’t suit the headliners well, we’re reasonably open to finding out if they do, considering that some of our favorite bands/people were discovered that way. I suspect that last night’s opener will make that list (perhaps they already did?).

Bethany and the Guitar is a five-person group, but basically, the core is Bethany Parks and her brother, Kurtis Parks. Since Kurtis played the guitar on stage, I’m gonna guess that Kurtis == the Guitar.

The bio on their site implies that they co-write most of the songs. Either way, both are clearly extremely talented.

Bethany sings beautifully and plays the ukulele on most songs. The first few numbers they performed reminded me of The Weepies. On others, she gave me more of the feel of Rosi Golan. In both cases, I describe it as ethereal/dreamy Pop, but with interesting lyrics, so it’s not just about the sound (though if that’s all that grabs you, it’s more than enough!). 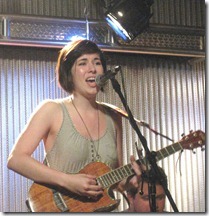 Kurtis sings harmony a fair amount (very nicely, or I could never have likened them to The Weepies!) and plays guitar quite nicely on all the numbers. He sang lead on a verse or two as well. From his site (linked above), he has (and has had) his own bands as well.

They performed two songs last night that Bethany didn’t write (or co-write). One was a cover, the other was co-written by Kurtis and a Nashville songwriter.

Bethany sang a new song (not on the CD) that she wrote for a NYC-based charity called Buy Her Bag Not Her Body. The bags were also for sale at the merch table. This charity saves women from the sex slave trade and gives them a skill (in this case making hand bags) to support themselves.

Rachel announced during her set that her birthday was upcoming and that Martin bought her one of the bags during intermission. Martin scores a double, for being a good friend and doing a good deed at the same time!

The rest of the band, left-to-right on stage:

Eric Montgomery on electric bass. Very nice job throughout the set. He also helped Bess, Rachel, Martin and Craig with the monitor volumes and cabling during their sets. From the photo on Kurtis’ site, I see he is/was also part of Kurtis’ band (Kurits Parks and the Anthem). He’s on the right. The guy on the left was in the audience. 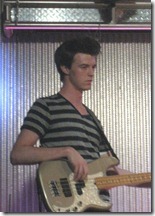 Sarah Parks vocals and clapping. Sarah is married to Kurtis. She has a lovely voice. Unfortunately, she didn’t seem comfortable enough on stage to want to use it forcefully. She often sang a little further back from the mic than would have been ideal. What I heard was really good though. I also listened to their CD and it’s easier to pick out Sarah’s voice there.

Speaking of the CD, we bought two copies. Thankfully, it holds up as well as I could have hoped given last night’s performance. I’ve listened to it twice today (after ripping it, not once per physical CD). The last track on the CD is labeled “World Famous (Bonus)”. They played it last night as well, I think closing the show with it. On that track Sarah sings the final verse on the lead (the only verse she sang lead on last night).

Nick Welsh on cajon. Nick did an extremely good job. I haven’t seen too many cajon players, but I’ve liked the instrument every time. Nick had more of a snare sound to his (which was new to me). 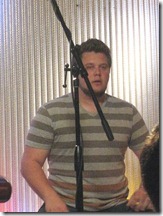 During one song where there was clapping (note that I listed “clapping” as one of the things that Sarah did a number of times), Nick seemed to get the cajon to sound like multiple people clapping along with Sarah.

Both Nick and Bethany joined Rachel for her last song, each with a tambourine in hand with Nick adding a shaker (after all, he’s a professional percussionist!). 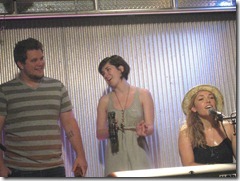 When Bethany was done performing, she told the crowd to stick around for two of her favorite artists, Bess and Rachel. We’ve heard many opening acts praise the headliners. Often it’s sincere (Bethany certainly appeared so), but sometimes it’s obviously meant to curry favor (points for the future perhaps).

During one song in Rachel’s set, I noticed that Bethany was singing along word for word. Obviously, Bethany didn’t only seem sincere, she’s really a fan. Nice, as it was clear from Rachel and Bess’ praise of Bethany on stage (multiple times) that if they weren’t fans before, they certainly became fans of Bethany last night. As did we!

2 responses to “Rachel Platten, Bess Rogers and Bethany and the Guitar at Ebenezer’s Coffeehouse”