Our Tenth Wicked is still the Charm

Our godson (David) and his wife (Rebecca) were coming up to spend their first weekend with us as a married couple. They were to arrive on Friday night when the festivities were to begin. Unfortunately, the Wicked witch was in control on Friday, and after hearing every excuse in the book, their flight was canceled.

The Good witch took over (you can’t reverse a spell) and got them out the next morning (yesterday), but since the evil spell had been cast, they were forced to wake up at 3am to catch a 5:30 flight. It all went well and after an amazing lunch at the Palm West, we headed over to see Wicked across the street (their choice). 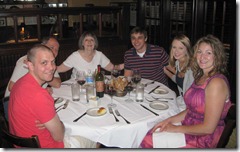 The last time we saw Wicked, I ended my post with the following:

At some point in the not-too-distant future, we’ll hit double digits. It was roughly 11 months since the last time we saw Wicked, so it might not be right around the corner, but it’s coming, I can feel it.

We wanted to make sure that David and Rebecca didn’t pick Wicked thinking we weren’t willing to see anything else, but they insisted that they were really interested, so no further arm twisting was necessary. We saw it with our mutual friends Wes and Jacklyn who came up from Philly for the weekend. We bought the tickets about a month ago, so we couldn’t get six together. Each couple sat together but we were clustered close enough to each other.

The last time we saw Wicked, Katie Rose Clarke played Glinda. She was in yesterday’s show again and was as spectacular this time as last. There was no letdown in the last number either, so this was actually a better performance (her comedy is still a touch over-the-top, but it really works, so perhaps I’ll stop saying that if we see her again).

Teal Wicks as Elphaba. We made the mistake of watching a YouTube video of her singing Defying Gravity, on Broadway, from a February 2011 show. It was awful. Thankfully, that’s not the way she came across yesterday. I can easily quibble with a few things, particularly in her first number, The Wizard and I, but they were so minor and the rest of her performance was fantastic.

She hits the highest notes in Defying Gravity so crisply, cleanly and powerfully, it’s a thing to behold (and hear). My last quibble is that she’s not as forceful in a number of her duets, where it feels like she’s holding back in order to be generous to her co-star (both Glinda and Fiyero), but her voice gets a bit lost at those moments.

Nevertheless, I’d happily go see Teal again. She delivered the spoken parts of the show perfectly (including her acting).

Tom McGowan was The Wizard. I’m a big fan of his TV work. He was in 42 episodes of Frasier and 17 of Everybody Loves Raymond (and I’ve seen every one of them, probably at least twice). He did a marvelous job yesterday, including his singing.

The Governor of Munchkinland was the same actor we’ve seen all 10 times. That’s over a 4-year period and impresses the heck out of me. He’s great every single time.

Almost everyone in the ensemble has been the same (I can’t even believe how familiar they are to me, but I guess 10 times shouldn’t have me so surprised).

The rousing standing ovation from the sold-out crowd for the leads seemed to overwhelm them (in the positive sense), but then again, they’re both fine actresses, so who knows. 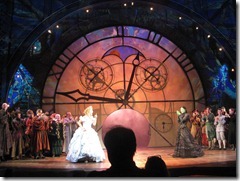 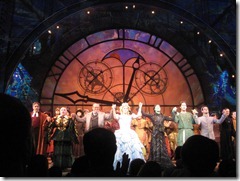 Lois scooted home in a cab to prepare for the continuing weekend festivities, while the five of us walked back leisurely (the weather was spectacular) and arrived just as all the food was being delivered. Perfect timing. The rest of the evening will be covered in the next post.