Nearly four years ago Lois and I attended a show at Tarrytown Music Hall. The opener that night was Anthony da Costa. At the time, he was 16 and many considered him a rising star in the folk world. A few weeks back when I locked our calendar to see Alex Wong at Rockwood Music Hall, I noticed that Anthony was listed at 9pm, the set before Alex. I figured we’d catch him and see how he’s progressed over the past four years.

Eight of us had dinner at the Peking Duck House (regular readers will notice that this was our second time there in under a week, yay!). Six of us (four were on a business trip from VA) headed down together. While we settled in and ordered drinks, a solo guitar player got on stage to warm up and sound check. He didn’t really look too much like Anthony, but it was four years later, so who knows.

Then he started to play the guitar (just warming up) and I thought Anthony has gotten a ton better (he was reasonably good even back then). To sound check his voice, he actually spoke, at which point I was sure it wasn’t Anthony. I thought it was a New Zealand accent, but it turns out it was Australian. You’ll have to forgive my error (especially given that I was born in Australia!), since we had lunch yesterday with a Kiwi (the human kind) and his accent was reasonably close to hers.

Kim Churchill had replaced Anthony da Costa on the Rockwood schedule. I don’t know if it was yesterday morning, or a few weeks back, but his name was listed on the website when I went back and checked. From the sound check alone, I was sure we wouldn’t be disappointed. That’s an understatement. 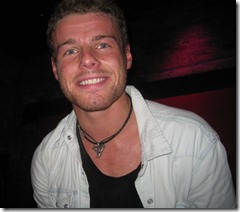 Kim is literally a one-man band. He plays acoustic guitar, harmonica and a kick drum, simultaneously. But the sound he creates is way bigger than what you’d imagine. I’ll do my (pathetic) best to describe it in a minute, but first I’d like to rave a bit about his guitar play.

Kim played a variety of styles. He’s one of the best (fastest, smoothest, cleanest, interesting) finger pickers I’ve ever seen. I developed a case of carpal tunnel syndrome just watching his right hand cycle through the strings over (and over and over and over…) as his left hand danced up and down the frets at high speeds. 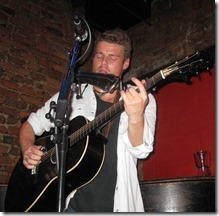 He played a bit of both hands on the frets style (right hand hammers down), like many of the Candyrat stars and Kaki King do. Of course, he did it extremely well (not necessarily as well as someone like Andy McKee does, but clearly, this isn’t Kim’s primary style). 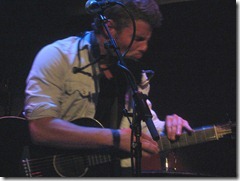 Obviously, he also just strummed. I put that in italics, because everything Kim does is with such overwhelming passion that adding just was sort of ridiculous. We should call it power strumming, because it’s usually coming when his belting out some lyrics to the point where it looks like he’s about to explode.

He played some more classic leads (closer to a flat-picking style), and was awesome in that too, but again, the majority of the magic happened in his finger picking.

Before I continue, allow me to duplicate his “About” section from his Facebook fan page:

Guitarist and songwriter Kim Churchill is a truly gifted soul. At just 20 years of age, his implausible talent and unique approach to his music is something to be in awe of.

First, I bolded his age, that’s not how it appears on his page. Second, I typically chuckle when I read statements like that. They’re often written in third-person, as if some outside reviewer wrote it, but of course, it appears on a page controlled by the artist. In this case, let me just tell those of you who don’t know him, the description is accurate!

OK, back to why his sound is bigger than just a guitar, harmonica and kick drum. He had a double-decker pedal board in front of him (the second level looked like it was roughly six inches higher than the the lower level, and set back as well). He was barefoot, which might have been because he used his toes to adjust some of the knobs on the pedal board (meaning, they weren’t all just switches to press on).

He had two amps, one to his right and one behind him and a little to his left. The amps were perhaps eight feet apart. To my ears, the one on our left was very bright, handling the highs very crisply (I believe it’s an amp supplied by Rockwood). The other one seemed rounder sounding, handling the mids in a more muted way.

When things were working correctly (I’ll get to that in a bit), it created a really rich sound, because the same guitar was coming out of two different amps sounding like two different guitars. If I’m wrong about that (and I very well might be!), then his actual guitar was louder than most (I was only two feet away from him though).

His harmonica was mic’ed as well (permanently, taped up with what looked like black duct tape). That mic had a ton of reverb on it. When Kim wanted a change of mood on his vocals, he sang into the harmonica (and therefore through the mic taped to the back of it), and his voice was a bit huskier, lower volume, but with a lot of reverb added. The main mic had reverb going too, just not quite as much.

Speaking of reverb, he might have overdone it a bit (in my opinion, and the opinion of at least one other person in our group). Still, I’d take the amount he applied over none, since it generally worked well.

He has a very nice voice. Unfortunately, since I was so close to him, I was directly under the main speakers in Rockwood that handle the vocals. Being so close to the amps (and his loud guitar), his lyrics were often drowned out for me (though I could still hear his voice). Lois told me that she could hear him perfectly (she was six feet behind me, but in perfect position for the house speakers).

So, this was a perfect show, right? Wrong! Kim had so many technical difficulties it wasn’t funny. The pedal board had a wiring problem and the main amp (the one with the bright highs) kept cutting out, then reappearing. In between songs, he and his roady (friend) would jiggle things and it might come back right away, or a bit later, only to cut out again.

At no time did the sound go dead (for me). It either came out a bit more muted from the second amp, or like I said, the guitar was simply loud enough to carry without amplification (all of the two feet to my ears). It was annoying (in the jarring sense) when it would cut out and return, but nothing about the performance was annoying even in the slightest. I felt bad for Kim, I felt bad for us that we didn’t get the intended full effect, but even at the height of the problems, the music was fantastic.

Kim turned it into a joke, at least twice. The first time, he said “We’re going to enter the mellow phase of the song now. There really isn’t a mellow part in this one, so I’ll have to create it now.” (That’s a poor paraphrase, very poor.) Later in the show, when it happened yet again, he said something like “Here comes another unexpected mellow version!”.

In other words, even at 20-years-old, he doesn’t get rattled on stage. He’s funny and entertaining, even in adversity.

When the show was over we wanted to buy his CD. I asked him how much. He said he really didn’t know how much to charge (he’s been in the country for about two weeks and this was his first official show). He asked me if I thought $20 would be too much and if so, I could pay less.

I admit that it took me aback for a second. I can’t remember the last time I paid $20 for a CD (even at a show). Well, that’s a lie. I do remember, it was in 2008, and that group has since reduced their live-show sales prices to $15. But, as I’ve said many times here, we really purchase CDs at shows to put cash in the artists hands, so I recovered very quickly and happily gave him $20 (seriously). So did another person in our group.

When Kim realized that the other person was surprised at the price, he told him to make a copy for the other guys he was traveling with. Very classy. When we discussed it later, I noted that I was actually impressed with his approach. He didn’t insist on a high price, but he created the opportunity to get a higher value for the CD.

This morning I checked Amazon just out of curiosity. They have one copy in stock. It’s an import. It’s $31.07! So, I got a bargain yesterday!

It’s available for download on iTunes (I recommend Amazon when available, but it doesn’t seem to be) for $9.99.

I listened to the CD twice today (13 songs). I really like it, a lot, but I admit two things: 1) The live performance is so much rawer with longer guitar bits, that it’s a little more electrifying, 2) Even though I now know that his lyrics are really good and sophisticated (I could obviously hear them really well), it was a very busy morning and even on two consecutive listens, I kept getting distracted from absorbing them the way I wanted to.

On the CD, many songs remind me so much of Colin Hay. Kim uses reverb in a way similar to Colin, and of course both have accents (though not identical) and there’s a bit of the mystical sound going on in both. While I love Colin’s guitar play, he’s not in Kim’s league on that front.

Circling back to the beginning. Here’s a photo of us after our meal. Two more people from VA joined us at Rockwood, and Lindsie came up (separately) and joined as well. We were a party of nine, all blown away by Kim Churchill. 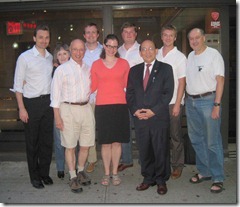