The last formal vacation that Lois and I took was in 1995, our only trip to Hawaii. Over the years, we’ve had a lot of fun times in amazing places, but nearly every one of them was on an international business trip for me. I consider our current vacations informal. They typically consist of very long drives south to visit my parents and our godson and his wife. Lois works non-stop, in the car, in the hotels and in the homes of the people we visit. I loaf and enjoy myself thoroughly, so it’s more of a vacation for me.

We just completed one and this is a brief documentation of it.

First stop was visiting my folks in Florida. 95 degrees and broiling every day, right after the heat broke up north, was a bit of a shock. It was nice to put on shorts and sandals again, but it would’ve been even nicer if the air conditioner in our car actually worked when it was hot outside. For the record, our car is 11 years old and has 225,000 miles on it (did I mention we drive long distances on all of our informal vacations?). 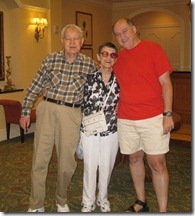 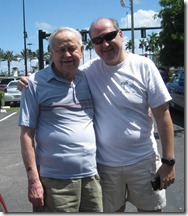 From Florida, we drove to Atlanta. We visited three sets of friends, all centered around wonderful meals. We got in late-ish and wandered out of our hotel in search of frozen yogurt. The person at the front desk didn’t think there were any within walking distance so we just headed out. One block away was a Ted’s Montana Grill (not exactly frozen yogurt), but we had a great meal at one in NYC when our goddaughter and her husband took us there. We decided to take serendipitous advantage and have a much bigger meal than planned, just the two of us.

The next day, first of our three social meals, lunch with a friend who worked with Lois before I met her, so while I know her for nearly 30 years, Lois knows her even longer. Three of her four children were able to join us too (children, as in adults!). The fact that the fourth couldn’t make it was OK, as she is a twin, so we just looked at the other twin twice as long to pretend that the missing kid was there too. 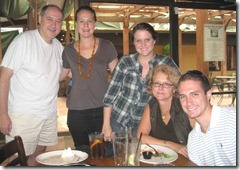 We ate at 5 Seasons Brewing Company. We had a delicious, leisurely lunch, served by one of the nicest waiters (we prodded one of the girls to consider dating him afterward, but he doesn’t know that). Such a great time catching up and swapping stories. We’ve seen the girls a couple of times in the past few years (in NYC), but we haven’t seen the boy (man!) in much longer, so that was a very special treat. After lunch they all had to run back to work. We miss them all already!

That night we had dinner with a couple who insisted on cooking. We had our first taste of Portobello mushroom burgers. OMG, one of the best things I’ve eaten, including toasted buns and I believe a home-made aioli sauce (it was definitely home-made, possibly not aioli). I can’t believe Lois missed taking a photo of the burgers.

It was our first time at their house. In addition to being completely inviting in every way, it’s absolutely gorgeous (often a hard combination to achieve). We ate outdoors, in a screen-enclosed, covered porch. The steady rain was welcome rather than a nuisance (until we had to walk back to our car).

The next morning we met another couple for brunch at Sun in My Belly. We had eaten there once before, so we knew how much we’d like the food (we were correct). The more important part was meeting our friends. We hadn’t seen them since April and that meeting was all too brief. Great conversation, great food, more time (but always too little). Perfect way to cap off our brief stop in Atlanta.

We headed to Birmingham directly from Sun in My Belly. Our godson was married in March (this year) and we were going to pick up a portrait of his wife from the wedding photographer to hang in our apartment. We had a little adventure meeting him at a McDonald’s, don’t ask. Thankfully, the portrait is so gorgeous that it was worth the Keystone Cops coordination.

After checking into the hotel and catching up on some business, we headed over to their house to hang out with Rebecca a bit. David was working in the hospital. When he was done he called and we agreed to meet at Davenport’s Pizza Palace for dinner (halfway for each of us). 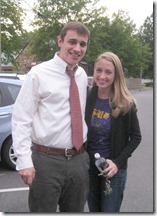 I have never had pizza served like that, cut into small rectangles all the way through the very large pie, so that it was easy to handle every bite (most pieces were two or three bites worth). That it was delicious as well was a big bonus.

I tried to order seltzer/club soda (honestly, I have witnesses), but they didn’t have any, so I was forced to drink beer. Rebecca drove us there, and David drove me back, so it was a good time to be in a seltzer-less place.

After dinner we headed over to Yogurt Mountain for a refreshing dessert. 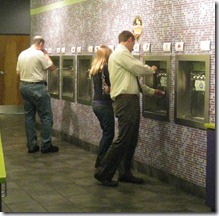 On the drive back to their place, David and I had very manly discussions. I’m sure the girls had very girlie ones, so no gender stereotypes were harmed during the return trip.

We just recently finished watching all five seasons of Friday Night Lights and totally loved the show. In a wild small-world story, one of the producers and directors of the show was my best friend in high school. We lost contact shortly after and his participation in the show had nothing to do with our watching it or our enjoyment of it. Still, I was proud of the job he did.

We gave the DVDs for all five seasons to David and Rebecca and after pizza watched the first two episodes with them (yes, we picked up nuances that we missed the first time around now that we knew where the stories were heading!). We then headed back to the hotel to crash.

The next morning we returned to their house. Rebecca’s parents, along with her brother and his girlfriend came over as well. The eight of us caravanned to Irondale, AL. The Irondale Café is the place known as The Whistle Stop in the movie Fried Green Tomatoes. That’s where we ate lunch. Yes, we had the Fried Green Tomatoes! My meal was excellent. Thanks to the parents for treating all of us! 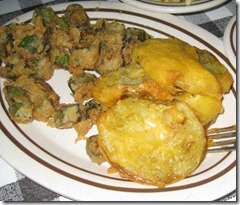 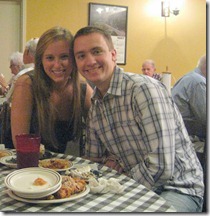 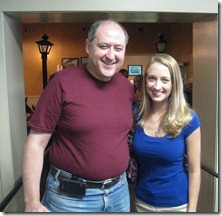 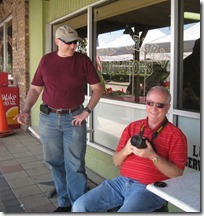 Since Lois is constantly taking photos, Charlie decided to duel with her when he noticed her lining up a shot: 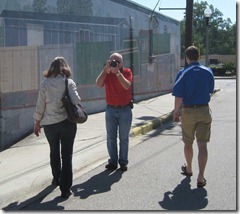 It also happened to be The Whistle Stop Festival that weekend, so we spent the next two hours wandering around the various tents/booths on a gorgeous day. Lois and I spent a good amount of time listening to a trio called The Tame Dogs, an acoustic subset of The Rescue Dogs Band (their domain just expired, so I linked to their Reverb Nation page instead). They were very good. 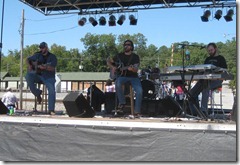 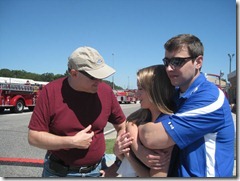 There was also a classic car exhibit: 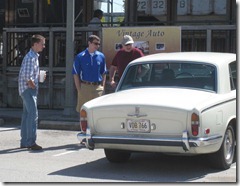 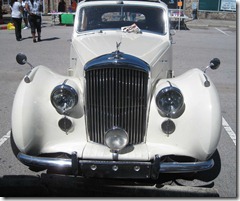 We said our (temporary) goodbyes and headed back to David and Rebecca’s for some more Friday Night Lights and the Alabama/Arkansas game (Roll Tide Roll). I rooted David’s Incredible 2 and put on a custom ROM. David has been on Android for nearly two years, but this is the first time he’s had root and a custom ROM. We’ll see how he likes it.

The day before, we were told firmly (but nicely) by Rebecca that dinner on Saturday was on them (no ifs ands or buts). In order to guarantee that, she wouldn’t even tell us where we were going, so that Lois (being the sneaky person she is) wouldn’t be able to call in advance and arrange to pay (secretly).

We met Rebecca’s parents at The Veranda on Highland. It felt like it was mostly a seafood restaurant, but for whatever reason, I was in the mood for the Filet Mignon. It was one of the most incredible steaks I’ve had (and I’ve had many). Melted in my mouth and the mashed potatoes were equally delicious. Everyone else raved about theirs (scallops, shrimp and grits and fish of the day).

David paid and we didn’t interfere. Thanks David and Rebecca! This was the first time I experienced table-side credit card swiping (not Square, a real portable swiper). David was able to press a button to select a pre-defined tip percentage, and he signed on the reader as well. A built-in printer spat out the receipt. A very efficient system, where your credit card is never out of your sight. Slick. 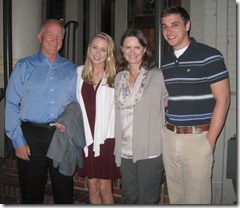 After picking up my computer we headed back to the hotel for another crash. The next morning Lois went to Church with David and Rebecca while I stayed in their house. They called when they were done and I met them for an exceptional lunch at Genghis Grill. Pick out your own stuff, season it yourself, have a professional stir-fry it for you. Fresh and delicious.

Next door is a brand new Red Mango (frozen yogurt), so we had to repeat the refreshing dessert ritual from Friday night. 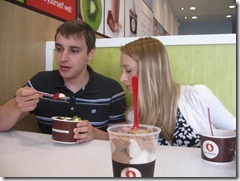 We spent roughly 1/2 an hour back at their house sharing some new music with them and then hit the road mid-afternoon. Of course, we miss them already!

I’m sitting at my desk working (OK, I’m blogging, but I’ll be working again shortly). Another informal vacation in the books. Another winning one (they all are!).