It’s been three months since we last saw Sierra Noble perform. That’s a bit too long so I’m glad the dry spell is over. I had last night marked on the calendar for a long time (Rockwood Music Hall). Finding out a few days ago that a number of my favorite people/performers would be supporting Sierra was icing on the cake.

Sierra opened the set by saying that she intended to tell a story with the music. That story was a condensed biography of this young phenom’s life (sort of a live Wikipedia show). She hails from Winnipeg and started her musical career at the age of 12 (so says her actual Wikipedia page, see what I did there?). At 15-years-old, she released a CD of fiddle tunes (I have it, it’s wonderful!). 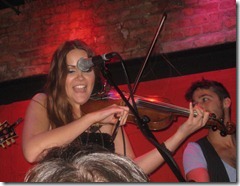 She started the set last night with a traditional fiddle tune.

Next she talked about how she was cajoled (nearly forced) into singing and songwriting. She explained that a number of her fiddle heroes went in that direction as well (unsuccessfully), making her extremely reluctant to follow that path. Thankfully, her friend(s) persisted and eventually got her to relent.

Her very first effort yielded the co-written tune Possibility. It inspired her EP Possibilities (released in 2008) showing off her amazing singing and songwriting talents. She played that song next. For that she switched to an acoustic guitar. She switched between the guitar and the fiddle a number of times throughout the set. 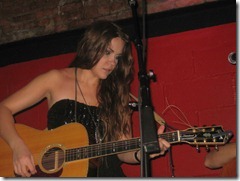 That was part of a Nashville period for her and yielded the next few songs of the set. The musical journey continued until she brought it full circle, ending with another hard-driving fiddle tune (Sierra just played a number of shows and festivals in Winnipeg before coming to NYC for a nice stretch).

That she is only 21 is mind-boggling. Thinking about how much musical greatness we’ll see from her over the years makes me a bit giddy.

We’ll get to the band in a minute, but half way through the set she brought up Martin Rivas as a special guest. Martin sang harmony and wielded shakers a bit as well. On Human After All (a song co-written with Michael Logen) Martin sang lead as well as harmony, kicking off the first verse. Their voices blend beautifully. 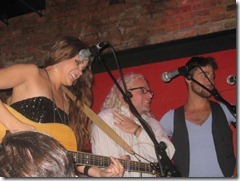 On to the band, left-to-right on stage:

Greg Mayo on electric guitar and harmony. Greg’s play was appropriately subtler last night than when he’s the main attraction. It was also just as good. On one number he made his guitar sound exactly like a peddle steel, without using a slide. Later, he used a slide as well, getting a different sound.

He sang a bit of harmony, beautifully, on a number of songs.

Come to Rockwood Music Hall Stage 2 on Saturday (10/8/2011) at 11:30pm (yes, past my bedtime, but well worth staying up) to see Greg in all his guitar glory with a new incarnation called The Red Delicious Apples.

Ariel Posen on acoustic guitar. Ariel is a well-known guitarist in Winnipeg. He played mostly rhythm last night, but occasionally took short tasty leads showing off his skills. For one brief moment he and Greg did a little guitar duet. I look forward to seeing more of Ariel should he choose to hang around NYC. 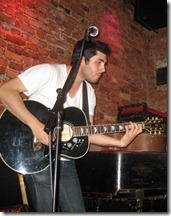 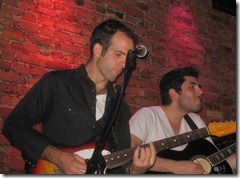 Chris Anderson on upright bass and background vocals. Chris was wonderful (as usual). 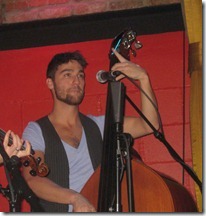 Craig Meyer on drums. It’s been too long (four months) since we’ve seen Craig play a full set. His wonderful play last night drove that point home. While he was excellent on every number, he was the driving force behind the finale, keeping a very lively beat for Sierra to show off her fiddle skills. 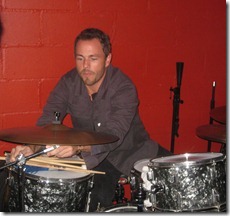 Joining Sierra on stage for one number:

Ian Schaefer  on trumpet. A gorgeous, subtle performance, with the cup muting the sound. 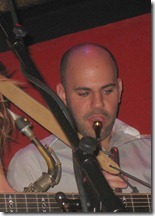 Sir Chuck Hancock on saxophone. Sierra noted that Sir Chuck was a last minute surprise. That implied to me that he didn’t rehearse with them. You couldn’t have guessed that from his perfect play dancing around between the verses. 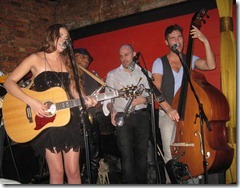 Later on, Sir Chuck played a bit from the audience (he was standing directly behind me, with the sax right at my left ear). It too was perfect, and amazingly, not even slightly too loud for me. I can only hope that Sierra heard his little magic on stage and enjoyed it as much as I did. 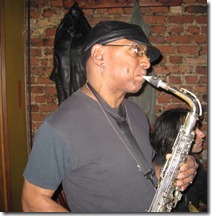 No need to start the clock ticking on another Sierra Noble drought just yet. We’ll be seeing her again a week from today (10/13/11) at The Living Room, 7pm. Be there, trust me.

Here is the set list from last night, a winner!