It’s been 3.5 months since we last saw Jeff Litman headline a set at Rockwood Music Hall, so we were due. The band was the same (a very good thing considering their skills), including the same guest keyboard player. There were two additional guests, taking Jeff’s always excellent performances up a notch.

A quick recap about Jeff (I’ve written about him a number of times now, so if you want more details, find any one of those posts on this site).

Jeff is an excellent songwriter. He plays the guitar really well (both electric and acoustic). He happens to be a very good bass player too, but that’s not the instrument he plays in his own band. He sings well.

Most importantly, he surrounds himself with top musicians and delivers an upbeat show that is hard to resist (so we don’t bother trying).

The first of the two special guests spent much of the set on stage, starting on the very first song.

Maddy Wyatt sang harmony on roughly 2/3’s of the songs. On one number she also played the flute, beautifully, an instrument that is sorely lacking at Rockwood. 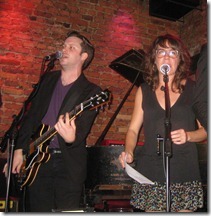 The other guest was Shanna Zell (who headlines her own sets, as well as being a member of The Ramblers, another of my favorite groups). Shanna was slated to sing on Back to You, the third song on the set.

Jeff announced that Shanna’s bus was running late and he was going to push that song down the list. What he didn’t know was that I personally arranged for Shanna’s bus to be late, not because I didn’t want to hear her, but because I wanted to move the fourth song up one notch, happily listening to Shanna a few songs later.

When I tell you above that Jeff is an excellent songwriter, I mean it across the board. That doesn’t mean that one song doesn’t stand out (for me personally). In my case, that song is Maine. Jeff knows it, I know it, anyone who reads this blog knows it (and for sure, the Lord knows it).

It’s been great every time, but last night was a real treat. On the CD (Postscript), Jeff sings the entire song harmonizing with a female voice (Kelly Jones). Since this was the first of Jeff’s shows where he had a female guest, it was the first time that he was able to perform the song as it is on the CD. Maddy was invited back up (while we waited for Shanna’s bus, bwahaha) to sing with him.

Thanks Jeff and Maddy. I should mention (for those that didn’t read the other posts) that Jeff switches to acoustic guitar on Maine and plays the harmonica as well.

Later in the set Jeff played a new song (he’s getting very close to releasing a brand new CD!) that he also played acoustic guitar on. The band took a break and Maddy sang with him (I think it might have been the song that Maddy played flute on as well). Wow. Maine may get some competition from this new CD (this song, or likely others that I haven’t heard yet). Very exciting. 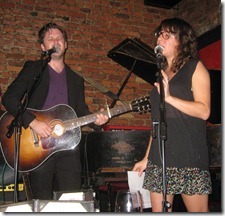 The superb band, left-to-right on the stage:

Bryan Dunn on electric and acoustic guitars and vocals. Bryan is good at everything he does (at least the things he does on stage).

For most of the set he played acoustic guitar while Jeff played electric. When they switch, Bryan shows off his considerable skills playing lead. He sings extremely well, though he deferred to Maddy more than he does during a more typical Jeff Litman set.

Elliot Jacobson on drums. It was a treat to see Elliot for a second time in four days (he supported Bess Rogers on Thursday night for her CD Release Show). He’s excellent no matter who he’s supporting, but Jeff’s music is generally so upbeat, that Elliot’s precision, speed, stamina and notorious hard-hitting style are so perfectly suited to it. The rest of the band needs to nail every song because Elliot sets a demanding example. 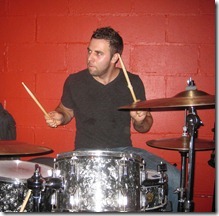 Jason Wexler once again was a guest keyboard player (grand piano and electronic). He joined for the last two numbers and was an integral part of both, in particular the only cover of the night, the closing number, Pump it Up. 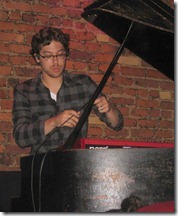 We couldn’t have been happier with the set. Thanks Jeff, Bryan, Matt, Elliot, Maddy, Shanna and Jason.