We had friends in from out of town. We’ve been targeting one of them for three years now to see Wicked with us and we finally made it happen last night.

I’ve written about each other performance, so I won’t go into specific show details. Feel free to search for “Wicked” up top and find the other 10 write-ups.

Instead, I’ll just briefly review the performances of the main characters and explain an insight I had last night.

I always worry about the two leads (usually, unnecessarily). I typically check them out before buying tickets. Since we didn’t have leeway this time, I just bought without looking them up.

Both were new to us, which is exciting and frightening at the same time.

Jackie Burns as Elphaba. Jackie was nearly flawless. You can’t expect, nor even hope for flawless, so I was completely happy/satisfied with her performance.

Jackie’s acting was fantastic. I noticed a few nuances that I had either missed in earlier performances, or that Jackie brought a fresh take on. Her voice is extraordinary.

My nits were in a few of the harmonies and a tiny amount of styling (singing a song reasonably different than the original cast album version).

Chandra Lee Schwartz as Glinda. Chandra was fantastic, though a bit less flawless than Jackie. I was still completely happy with the performance.

Chandra’s acting was equal to Jackie’s. Her comedic timing and physical gestures were up there with the best Glinda’s we’ve seen, while never being too over-the-top (they’re supposed be somewhat over-the-top, by design).

She has a stunning voice, but it’s not completely consistent across all ranges. For the most part, the harmonies with Jackie were great, but there were a few notable exceptions, which I also counted against Jackie (in my mind).

In particular, the big finale with both of them, For Good, caused them a bit of a problem (probably unrecognizable to a first-timer). This song often seems to cause a problem. I don’t know if it’s trickier than the rest or whether they’re exhausted and it’s difficult to keep up the concentration and energy by then.

To be clear, it was still excellent, but with meaningfully noticeable issues.

They are paired well and I’d happily seem them again.

The rest of the cast was excellent with one very minor exception. Fiyero was a substitute last night (Constantine Rousouli). He was delightful throughout. The exception was in the forest scene with Elphaba where they sing together sitting on the stage. He struggled a bit when he was singing his solo parts and a bit when he sang harmony with Jackie.

Now my insight. I know that practically everyone who knows me thinks I’m crazy to have seen Wicked as often as I have. I would bet that the people that have seen it with me, even the ones who loved it, think that the most (meaning, they can’t imagine wanting to see it 11 times).

That wasn’t the insight.

The insight is that the more often I see it, the easier it is to soak in the total majesty (and occasionally notice new things, which happens every time), because I know every note and every word. The point is that I don’t have to sit on the edge of my seat hoping to catch the next clever line (spoken or sung). I enjoy them (like they’re second nature), but can concentrate on anything else I want without missing the joke, the melody, the harmony, etc.

The first time around, you have to really pay attention to the dialog and the singing, so closely, or you will miss a key piece of the story, or a hysterical pun/joke.

OK, so it’s not deep, but it’s still accurate.

After the bows (to a standing ovation when Chandra and Jackie came out), the entire cast stayed on stage. 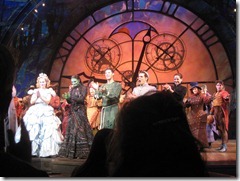 Chandra came forward and announced that this was one of the two times a year that all of Broadway raises money for Broadway Cares / Equity Fights AIDS. 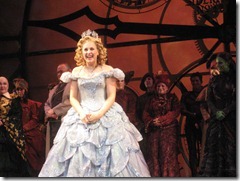 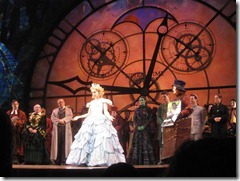 I gave money (as I always do) when we walked out. Our schedule must be predicable, because this is at least the 6th time in our 11 trips that it’s been one of the two times a year. I’m now suspicious that the two times are the first 180 days, and the second 180 days, or the two times are whenever Hadar is in the theater.

Before the show, five of us ate at Bar Americain which is just two blocks from the theater. Everything about our meal was great. The food (appetizers, entrees and desserts), the company and the service. In fact, the banter and helpful recommendations from our waitress were a key part of the enjoyment.

That said, I’m not sure if I can explain why it wouldn’t be at the top of my list to return to (I don’t have a single complaint about any aspect of the evening!). Just a feeling that some other places that I’ve been to leave me more excited to return. Plus, there are the thousands of places I’ve never tried before either…