Apollo Run headlined a set at Rockwood Music Hall Stage 2. I’ve heard about Apollo Run from a number of people, including a band that we love who has opened for them on more than one tour. All of them told me I’d love them. 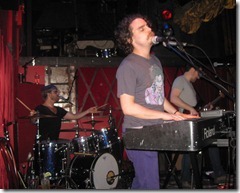 They might end up being right, I certainly understand the excitement, but last night’s set didn’t do it for me. On the other hand, the crowd, made up of their fans, went nuts (in the good sense) on every song, so I was in the teeny tiniest minority.

Every element of why I would normally love them was there, in spades, which is why I allow for the fact that I could (easily) get there, eventually. Given that, I’ll cover only the positive things first, allowing any of their fans to shake their heads in agreement first, then they can split when I turn to the negatives, or they can shake their heads in pity at my lack of understanding.

Each of the three members of Apollo Run is incredibly talented in multiple ways. The whole is greater than the sum of their individual parts. I’ll describe each first, then talk about the group, their sound and how you can easily check them out (which we did before we decided to go).

John McGrew is the lead singer. Last night he mostly played the electronic keyboards. He tossed in a cool trumpet part in the middle of one song (then tucked the trumpet between his legs to finish the song on the keyboards). He played the electric guitar on the final (stage) number, but also played a bit of keyboards in that. 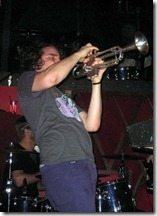 He was good on the keyboards, but he was great on vocals. He has a very crisp voice that can hit very high notes without going falsetto. There’s something very compelling about his voice. He’s extremely passionate in everything he does on stage (including dropping to his knees to wail on the electric guitar during the finale). His fans went wild whenever he took it up a notch. 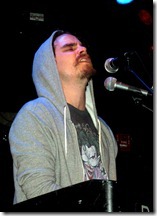 Graham Fisk on drums and vocals. Graham is an exceptional drummer. He’s the primary harmony vocalist as well, singing roughly 50% of the time that John is singing lead. Their voices blend so well. Apollo Run’s songs are mostly filled with very driving rhythms/beats and Graham is an integral (perhaps actually critical) part of that sound. 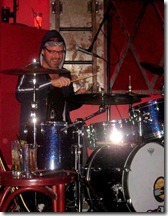 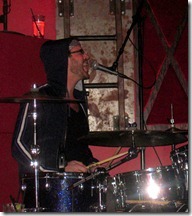 Jeff Kerestes on electric bass, ukulele and vocals. Jeff is one of the most inventive (and talented) bass players I’ve seen. Since there wasn’t a lead guitar in the set, and John played more chords than lead on the keyboards, Jeff was often playing fast and sophisticated leads on the bass. He also played with both hands on the frets a couple of times, creating a superfast sound (like the top acoustic guitarists do). Wildly impressive.

Jeff played the ukulele on two songs, one of which was a song they wrote last year, during Charlie Sheen’s meltdown, where they put Charlie’s actual words to music.

Jeff is the only one that I’ve seen before. He played a few numbers in support of Alex Liang Wong, also at Rockwood 2. I was impressed that night as well, writing the following:

He was quite good.

Jeff joined for one additional number later in the set and played in a style I don’t often see. He spent much of the song sliding one hand or the other, up and down the frets, very slowly. It produced a gorgeous sound in accompaniment of a slower, more soulful song.

The three-part harmonies are awesome. Unreal power, not subtle stuff, except when there are few or no instruments accompanying them, in which case they can totally control their voices to get more mellow, but still beautiful.

We listened to one song (and watched the clever YouTube video). We loved the song so we were very excited to go see them. If you are prone to epileptic seizures, don’t watch the video, just listen to the song. I think it’s angelic. Parts of it would certainly be appropriate for welcoming people to heaven:

One more video, of a live performance at Rockwood 2, of the song where John plays the trumpet in the middle. Good shots of each of them, so you can get a sense of the experience, specifically at Rockwood 2:

They closed the show by jumping off the stage and going into the heart of the crowd. They sang “All in Good Time”, a cappella, a gospel revival type song. The crowd joined in the clapping and foot stomping in a big way, producing a huge sound. 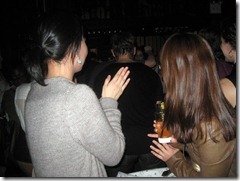 Here’s a tiny clip (part of their promo for their second EP, released last year). It will give you a good idea of what All in Good Time felt/sounded like last night. I tried to queue it up to the 1 minute 47 second mark, where that part starts. I couldn’t get it to work for this embedded video, so feel free to skip to 1m47s:

Promo for Here Be Dragons Vol II by Apollo Run

On the home page of their site (first link in this post), you can exchange your email for a free download of City Lights, which you can also stream on the left side first. It’s beautiful.

So, this was all pretty awesome stuff, how is it even possible that you didn’t like the set, Hadar?

We’ll get to that in one second (so please tune out if you only wanted to read glowing stuff about Apollo Run). 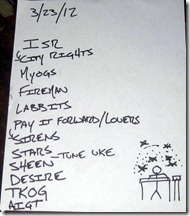 While everything I said above was evident last night, the glowing descriptions come more from my listening to them all morning, both on their site and on John’s site (where it starts streaming the minute you click on it, which isn’t so cool, but the music is!).

Last night, rather than enjoying the sound, I felt assaulted by the sound. Three things caused that, all cumulative (making it worse):

1) The volume was cranked up way too high. It was balanced to some extent, so it wasn’t just one piercing thing, but it ended up washing out the otherwise extraordinary vocals. In fact, hearing lyrics (for someone unfamiliar with their songs) was nearly impossible. All of the recordings I listened to today were clean, even when they were infused with the same energy that last night was meant to deliver. I’m a drum fanatic (freak is a more accurate description), but even though Graham is fantastic (on every level), the drums were way too loud last night.

2) As amazing as Jeff is on the bass (truly), he turned on a bunch of effects throughout the set. At times he sounded like an organ, at others like a fuzz box. I guess there’s music where that would enhance the sound/mood, but to me, it was a huge distraction, especially at the volume he was playing (see above).

3) Because of the volume, the vocals felt like they were being screamed at me, even though they hit every note, cleanly. I’m not sure I can explain it well, but essentially, the vocals should feel somewhat louder than the instruments (for such a harmony-driven group), without feeling that they are too loud, or that the singers are working too hard to overcome the instruments.

So, while I could concentrate on picking out any sound I wanted (hence my description of the sound being balanced), it was all a wall of sound coming at me, rather than highlighted things (like the harmony, or a bass lead, etc.) floating appropriately above the background.

Now for a word from opposite world. I’ve already mentioned that their fans are in love with them. There was dancing, tons of swaying and head bobbing, and generally a feel of getting lost in the music (all good things). And yet, on every single quiet passage (of which there are a reasonable number, during intros, endings and some bridges), dozens of people were talking so loudly that I wanted to cry for John, who was singing so softly, sweetly and soulfully, over very few other sounds.

Aside from the rudeness, I just felt that the fans want the assault of sound. They’re not interested in the artistry and the individual skills that can best be sampled at really quiet volumes. They want to lose themselves in the energy. Obviously, that doesn’t apply to everyone in the room, many of whom were likely really annoyed at the talkers. But, this wasn’t one loud person or couple (which is more often the case), this was a meaningful percentage of their fans.

It might not bug Apollo Run at all, because they might just love the party atmosphere that defined the overall set, but it bothered me a ton, largely because those were the most beautiful parts of the set.

So, I have the dilemma of whether to go out and see them again. My guess is I will, likely when it’s convenient to an adjacent set I’m going to see anyway. In the meantime, perhaps I’ll just buy their music and listen to it without all of the distractions I felt last night.