I haven’t blogged in 10 months. Lois asked me to write about our experience last night, so my self-imposed silence is now broken.

Last night we attended a fundraiser at the Lagond Music School. I’ve written about the school a number of times. Every time we have an interaction with anyone associated with the school, we leave more impressed than the time before. That’s saying a lot.

I saw this painting by Ray Ferrer (she points to a specific work) and fell in love with it. I took his card, which had a photo of that work on it and every time I stared at the card, I fell more in love with the painting.

You are all looking at the wall now. After it was up for a while, Ray made an extraordinary offer. He said that if we held a fundraiser to sell the art, we could keep 100% of the proceeds for the school programs.

That would be extraordinary enough, but not enough for Ray! Ray said that for every painting that was sold, he would replace it with another one, so the wall at the school would remain permanently populated. 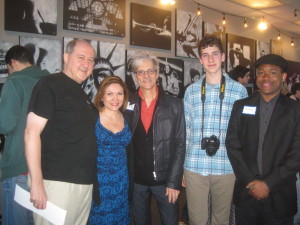 (You can click on any photo to see a larger version of it in a new tab/window.)

That’s extremely generous. Having met Ray last night, I am not surprised. We rarely buy art, but we were moved to buy some pieces last night both to help Lagond and to be able to appreciate and share Ray’s work.

Ray Ferrer (links to his Blog) works with an exacto knife and spray paint. Here’s a YouTube video of his process.

One of the works that we discussed took him over 20 hours of cutting and spraying!

You can find him on your favorite social network:

Ray Ferrer on See Me

Ray Ferrer on Google Plus 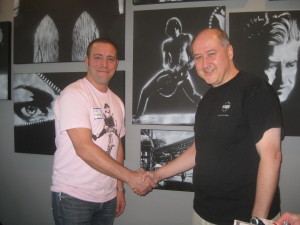 Here are three photos that cover the majority of the installation at Lagond: 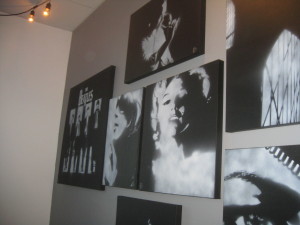 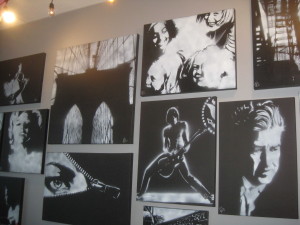 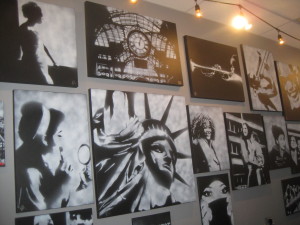 The evening began with a reception, giving people a chance to look over the art and decide which piece(s) they were interested in. During that time, one of the many Lagond student bands played an incredible Jazz set in the background.

I believe that this particular band is called The All Stars (a name, well deserved): 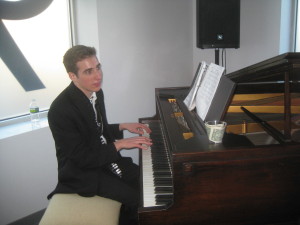 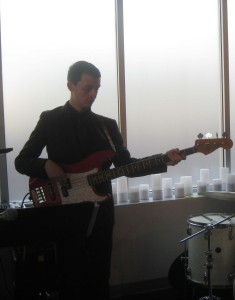 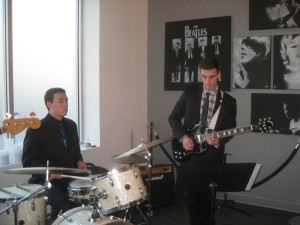 Later we all moved into the performance space and were treated to a set by The Speakers. This is a band made up of Special Needs kids. To see them put on a professional set and wow the crowd is an experience no one should miss. 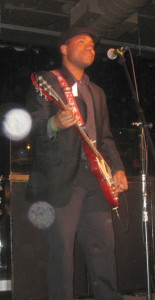 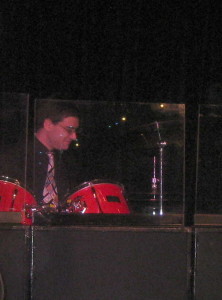 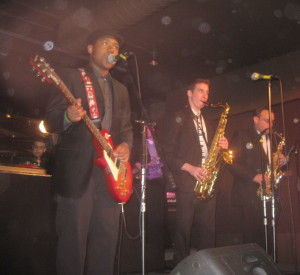 To be 100% accurate, there is typically one extra person in The Speakers who is not special needs, to help coordinate. The first time we saw them, it was Greg Mayo. Greg is their primary teacher at Lagond (and one of the two people responsible for us discovering Lagond to begin with, the other being Chris Anderson).

Last night, it was someone from The All Stars (the piano player), who played both keyboards and saxophone with The Speakers (he’s in the middle in the last photo above). One of their teachers, Rusty Cloud, also sat in with them on one song, playing the keyboards. Unfortunately, the one photo we have of him came out too dark.

The lead singer and guitarist was also the Ambassador of last night’s festivities. He gave an amazing speech before The Speakers set, explaining how the Lagond Music School essentially gave him the opportunity to live a happy, fulfilled life. He introduced himself as “an Autistic”.

The evening also featured a new partnership with YAI Network. YAI sends some of their students to Lagond and the director noted that they all come back beaming about their experience there. YAI is moving into new facilities toward the end of May, and the students will be featured in another Lagond show at that time.

A personal icing on the cake. One of the teachers at Lagond, Steven Salcedo was there last night, running sound for the main show. We met Steven a while ago when he was playing saxophone with the Greg Mayo Band. In addition to being an exceptional saxophone player, Steven is one of the nicest people we know. Both Lois and I look forward to seeing him whenever we can. 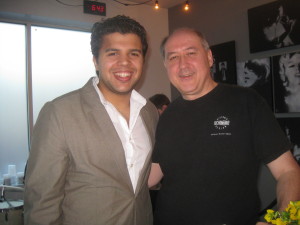 If I had to break my self-imposed silence, I’m glad it was for something as joyous and heartwarming as the music and spirit of the Lagond Music School, coupled with the incredible art of Ray Ferrer.