I’m rarely at a loss for words. Unluckily for those who intend to make it to the bottom of this post, this won’t be one of those rare times either. But, it’s still unusual, because simply following my normal structure of mentioning every single performer won’t do justice to what happened last night. So, I’ll take a slightly different tack today.

First and foremost, I need to bow to Sam Teichman (@samteichman on Twitter) as deeply and humbly as I can. Sam is a perfect example of one person, single-mindedly focused on getting something done and achieving that goal (actually, exceeding it). On November 4th, 2010, Sam sat next to me at Rockwood Music Hall as we enjoyed sets by Jesse Ruben and Alex Wong. Even on that night, Sam was doing for others, as I noted across three paragraphs toward the end of my post about that show. 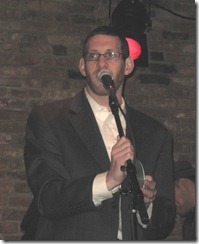 More importantly, that night, a mere 2.5 months ago, Sam told me to stay tuned for a benefit concert he was starting to put together. Sam is not a rich guy. Sam is not a powerful guy. Sam is not Oprah Winfrey, who merely has to mention the word benefit and superstars around the globe will claw to be a part of it.

Sam is just a guy with a huge heart, a love of people, a love of music, a talent for video production, perseverance and a tireless work ethic. Because of those loves and talents, Sam has amassed an incredible number of real friends™ many of whom happen to be amazing musicians. That allows Sam to pull off these miracles. It’s inspirational. We should all aspire to be like Sam.

Free Arts NYC was the beneficiary of last night’s fundraiser. Emilia Vincent, Director of Special Events for Free Arts NYC, came up on stage to thank Sam (and all of us). A number of other staffers were in attendance as well. Every donation taken at the door (minimum donation requested $10) and every CD and DVD sold (also name-your-price donations) went entirely to Free Arts NYC. All the performers (dozens) donated their time and talent.

The event was held at The Bitter End. A very nice club (very storied) who’s stage is just large enough to accommodate the often 15 people who performed simultaneously. Most of the night was an ensemble (more of an amalgamation) of people who don’t typically play together in a regular group (though subsets of them do play together). The one exception was the opening act.

Live Society opened the show (they also have a MySpace page). A couple of friends told me that I would really enjoy their performance. That turned out to be a huge understatement. What a total blast. Brian Collazo sings most of the leads and played acoustic guitar on two numbers. Jason Vargas sang lead on at least one number and incredible harmony on the rest. Kevin Collazo (Brian’s brother) sang harmony beautifully. The three of them could easily be an a capella group if they wanted to be. 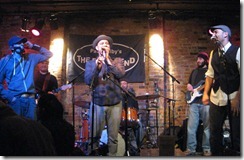 But, why would/should they be? Their guitarist, John Kaiteris, was awesome. In addition to being great on the electric guitar on every song, he wrote a number of them as well. Extremely talented! Erik Perez on the drums was very impressive. Superb feel for the rhythm of soul. Anthony Candullo on bass complements them. No weak link in this group.

But wait, there’s more. Making a guest appearance for Live Society’s entire set was Patrick Firth (I’ve written about him a number of times). He played the grand piano and electronic keyboards. He’s a master and both fit in with and was highlighted by Live Society. 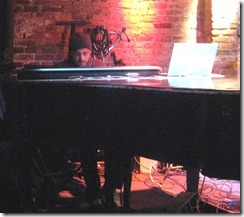 Brian called up another special guest to sing with them on one song, the always incredible Martin Rivas.

They’re working on a CD. I look forward to the release. Check out their music on the above links, you’ll love it.

After a 10-minute break, a cast of thousands piled on to the stage (OK, it only looked and sounded like a cast of thousands). At the most, there were 15 people performing at the same time. At the least, three. For the majority of the numbers, it was 14. What a huge sound (even when there were only three people on stage!).

The musicians didn’t stress about stage placement or sound checks as they shuffled on and off the stage in rapid succession. There was a core house band that played on most numbers, but that shifted as well. The transitions were smoother than I ever could have imagined.

The amazing brass section consisted of: John Liotta (alto/baritone sax), Ian Schaefer (trumpet) and Matt Simons (sax). They were on stage for roughly half the numbers. 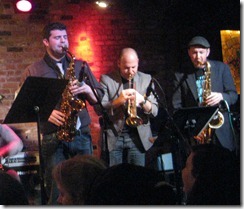 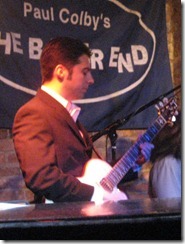 Seth Falk, Robbie LaFalce, Josh Dion and Craig Meyer all shared percussion duties (drums, djembe, tambourine) often with two on stage at the same time. Each and every one of them was wonderful. More on Josh Dion momentarily. 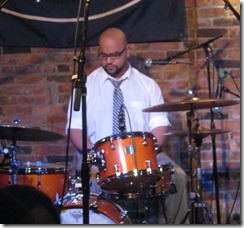 For most numbers, there were three or four backup singers on stage. All but one sang lead as well, so I’ll mention them in a second. The only backup singer who didn’t sing lead on at least one song was Valerie Mize. She did a wonderful job. I’m sure if there was more time, she too would have taken a turn at the center mic and wow’ed us. 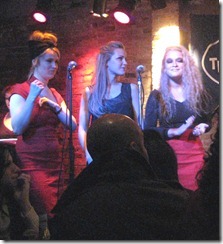 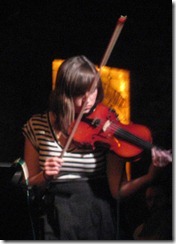 Abby Payne and Rebecca Haviland shared the grand piano and electronic keyboards duties (for those songs where there were keyboards, I’ll guesstimate that Abby played 1/3 and Rebecca 2/3’s of them). Both ladies were incredible. 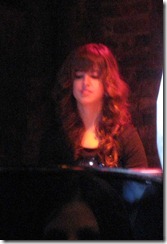 This brings me to the one unimaginably sad note of the evening. Greg Mayo suffered the untimely passing of his brother Christopher in a car accident earlier that day. Our hearts and prayers go out to Greg and the entire Mayo family over this unspeakable loss. A number of people on stage mentioned this tragedy.

On to the people who sang at the mic at center stage, raising our blood pressure (in the good way) and making us shout “Yeah” and “Hell Yeah” (among other grunts and words), literally.

Rebecca Haviland has an extraordinary voice and stage presence. I wrote about her briefly when I covered the Greg Mayo Band, of which she is a part. Last night her voice roared above the other 13 people on stage. Totally captivating. I already mentioned how amazing she was on the keyboards as well.

Luke Wesley has a very powerful and distinctive voice. It was our first time seeing him. Thoroughly enjoyed his number! 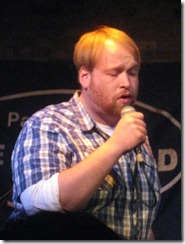 Bri Arden (also on Reverb Nation). A quick aside before telling you about Bri’s performance. Bri was a member of the backup singers for much of the night. When she took the lead, she changed her dress into something substantially more eye catching. Before she got to sing, someone else on stage asked her where the other half of her dress was. 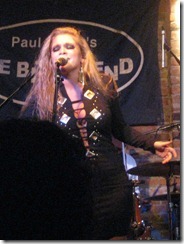 Bri sang Proud Mary, starting off slow and building to a heart-pounding final few verses (just like Tina Turner’s signature version). Someone in the crowd mentioned how difficult it is to emulate Tina. Bri pulled it off! When she next appeared as a backup singer, she was back in her other dress.

John Schmitt was up next. A number of my friends have told me that I have to see John Schmitt perform. Having heard his voice and style last night, I understand why. He’s now on my list. 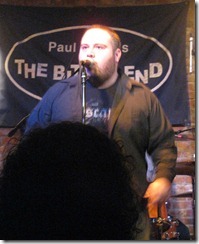 Abby Payne did a very nice job (yes, the same Abby who nailed the piano parts!). The only issue is that it took Abby a bit to crank up the volume on her voice, which was necessary because she (and all of them) were competing with tons of instruments and other vocalists. Abby had an all-male backup singing contingent. 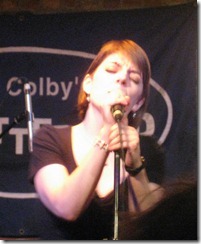 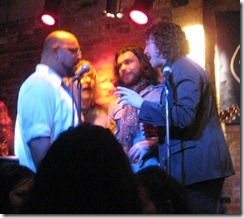 Karly Jurgensen was also a regular member of the backup singers before taking center stage. Karly has been a recent discovery of ours and I’ve written (briefly) about her twice. She is high on our list to see a full set and we got on her mailing list after the show to ensure we don’t miss out! 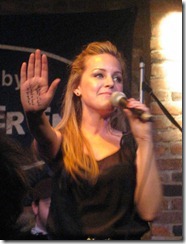 Up until now, each of the aforementioned singers performed one number.

Martin Rivas took the stage in a minimalist way. He was accompanied by Chrissi Poland on vocals and Craig Meyer on drums. Martin played the acoustic guitar. Rather than sing one song, or 10, Martin played a long (and absolutely amazing) medley of 7-10 numbers over a nearly 10-minute appearance. 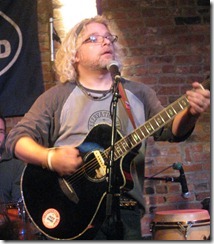 He and Chrissi were both great (more on her shortly) and they really got the crowd to sing along, multiple times. It’s Martin who also got the crowd (yes, the placed was packed!) to groan, as I mentioned above.

Chrissi Poland stayed on stage for the rest of the show. She alternated singing with whomever had the center stage mic, and taking the center stage mic herself. All told, she probably sang the most leads of the night, even including Martin’s numbers. She was awesome. We’ve only seen her once before, singing a few numbers with Martin at Rockwood 2. We were impressed then, and continue to be now. We want/need more Chrissi, now!

Josh Dion was already mentioned above as one of the drummers. It took me a second to notice that after Martin left the stage, someone was singing, but no one was standing at the mic at center stage. That’s because Josh Dion was singing his heart out, while playing the drums (which were center stage, but against the back wall). He was incredible! 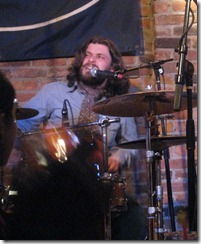 Jay Stolar (lead singer for Julius C) was up next, and he shared the stage with Chrissi Poland. He was also incredible. What a voice and what passion and energy on stage (very theatrical, in the best sense). I shouldn’t be surprised. For the past month, every time I ask a question of a friend in an audience (like: “Who’s that guitar player”?), the answer often comes back: “Oh, he’s in Julius C, you really need to check them out!”. Indeed, I do! 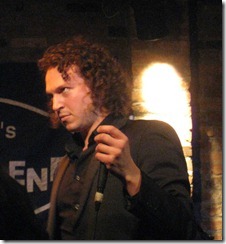 It was inevitable that this post would get to this length, even with the abbreviated mentions of many of the amazing musicians. Even at that, I haven’t done justice to what was obviously an epic night at The Bitter End.

Thanks again to Sam Teichman and everyone mentioned above (and anyone I missed) for putting on such a great show for such a great cause.

Just to make this post even longer, I will reproduce Sam’s entire thank you stream from Twitter, for those who didn’t click on his link above, or for those reading this long after it has scrolled off of his Twitter page:

…. @joshdion, jay stolar of @juliusc, @chrissipoland for singing your hearts out tonight on lead vocals.

And thanks to Oscar Bautista and @Serge_Ortega for brilliant guitar work, @jefflitman and @its5knobmike on the bass…

.. Robbie LaFalce of @PhilthHarmonic, @sethfaulk and Josh Dion on the drums and percussion. Valerie Mize on the backing vocals…

@matt_simons, Ian Schaefer and John Liotta on the brilliant horn work, and Megan Cox on the violin. You all amaze me. Words are not enough.

Thanks more so to every single one of you who came to support the cause, and the artists, tonight. You all reaffirmed my faith in music.

Special thanks to @CMorelliNYC for taking pictures, and @achance42, Matt Golub, Alex Depew and Doug Cion for filming the show.

I can not imagine a more perfect opening band for a night of soul than @collazo and the Live Society crew, and you guys crushed it tonight.

And a huge thanks to @hadarvc, @tinajbowen, @ArtSceneNYC, @thejujuqueen and all the others who retweeted and publicized the show so well.

Mostly, tonight reaffirmed my belief that people can make things happen, things of consequence, big or small. Believe in the arts…..

The only goal in life should be to create, to smile, to give, and to love. The rest is just details. Thank you all. We’ll do it again soon.