I can think of at least five independent introductions to this post, all appropriate. That means I have an 80% chance of picking the wrong one. Oh well, here goes…

I’ve recently written that Rachel Platten is one of our current obsessions. We last saw her perform on January 23rd, 2010 at Rockwood Music Hall Stage 2. At that show, we saw Caleb Hawley join for some harmony with Martin Rivas (our first Caleb Hawley sighting). You can read about that night in this post. Our first house concert was September 5th, 2010. Since then we’ve attended two more, we like them a lot. We spend a considerable amount of our lives in Fredericksburg, VA.

When I noticed that on our next trip down to Fredericksburg, Caleb Hawley would be headlining a house concert there and Rachel Platten would be opening, I was equal parts dumbfounded and excited. This house concert was being produced by an amazing woman named Ruth (I can say that definitively, now that we’ve met her), who runs a regular series called House About Tonight (clever, right?).

I was a bit surprised when she couldn’t confirm the venue right away, even though she immediately responded that she’d hold four spots for us. The reason was obvious once she explained. For those of you who don’t own a TV (or didn’t read my last post about Rachel), Caleb Hawley is a current contestant on American Idol. He blew away the judges (YouTube video now removed) (in particular, Steven Tyler) during the audition phase and got his ticket to Hollywood.

This was obviously not going to be an ordinary house concert. It wasn’t. After getting many more RSVP’s than usual, Ruth arranged for the show to be moved from a house to the Unitarian Universalist Fellowship of Fredericksburg. Roughly 100 people attended a professionally run show. Ruth’s tireless energy, coupled with the incredible number of volunteers who handled the logistics of collecting the money (100% of the ticket price goes to the artists, yay!), laying out the amazing food (brought by the attendees!) and keeping everything on a reasonable schedule, made the evening better than most commercial venues deliver.

On to the show. Rachel opened, accompanied throughout by an amazing drummer (who we’ve seen many times), Craig Meyer. Rachel can handle herself perfectly, even playing alone on her keyboards (and singing, of course). With Craig, there is a noticeable uptick in keeping the beats fresh and interesting. Rachel also performs with a full band. Catch her any way you can when she’s in your town, you won’t regret it! 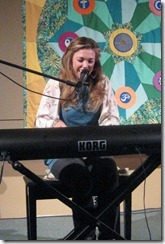 I’m repeating what I’ve written about her before, but here’s the summary: 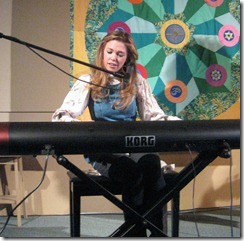 Rachel called Caleb up to sing harmony and play guitar on two numbers. I’ll save my commentary on Caleb for just another minute.

Rachel shared some fantastic news with us. Just a couple of days earlier she announced a new record deal. Read all about it.

Craig played an even more amazing set than we’ve seen before, largely because both Rachel and Caleb (Craig played with both of them) turned it over to him more often than usual. Not only did he rise to the challenge, I was impressed at how nearly everyone in the crowd was totally into the drum solos. 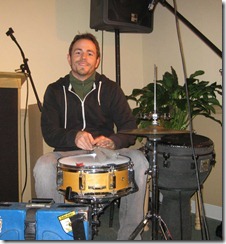 After singing with Rachel, Caleb stayed on the stage and Rachel stepped off (just to the side) and they transitioned from Rachel’s opening set to Caleb’s headlining set more naturally than I’ve seen before.

Let me repeat that even though we saw Caleb sing one verse (with a very large band) and saw his YouTube video on American Idol, we really knew nothing about him. That’s not entirely accurate. We have a lot of friends who we sit with at the various NYC clubs that we frequent. Many of them told me multiple times that I will be blown away by Caleb. Scheduling never worked for me to verify their outrageous claims, until last night.

Before I tell you why, let me assure you that my friends continue to impress me with their musical taste. I was indeed completely blown away by Caleb Hawley and can’t imagine missing another opportunity to see him whenever one presents itself!

No matter what order I list Caleb’s multitude of skills, you will (incorrectly) assume that some are better than others. One of the things that makes this kid (yes, he’s still a kid to us) so special is that everything he does is at a level that is rarified. Even fewer can put it all together. Caleb is the real deal!

Caleb has an incredible voice. If you don’t know him (like we didn’t), please don’t judge him by one a cappella performance with YouTube quality. Go see him, and/or buy one of his CD’s (we bought two last night!). I could definitely listen to him a cappella, live, for an entire set (especially his own songs). 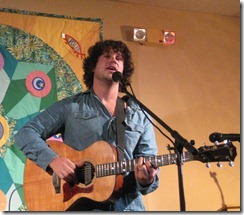 Most solo singer/songwriters that accompany themselves on the guitar do so acceptably (I wanted to say passably). That is to say that if they weren’t singing, most couldn’t hold my interest for very long just playing the guitar. Caleb Hawley is a notable exception. He’s a wonderful guitar player. I could listen to an entire set of his guitar play without any vocals and leave completely satisfied. 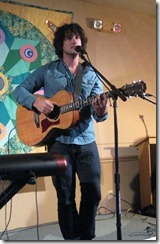 He mixes an incredible finger-picking style, with leads and rhythm in a manner that I don’t recall seeing in a long while (if ever).

So, he sings and he plays the guitar really well. Is that all? Ha, sorry, the list continues. He played the keyboards for one song, very well. I didn’t hear enough to rave like I did about the guitar, but he was good enough to warrant further listening! 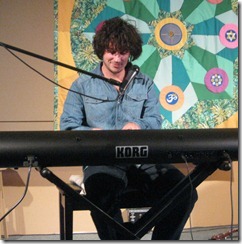 Songwriting? Check! He bookended the show with covers. He opened with the Ray Charles song that he performed on American Idol (Hallelujah I Love Her So), but this time, accompanied by the guitar and Craig on the drums. Much richer, gorgeous. He closed the encore (no way he could have left without an encore) with a Randy Newman number (Feels Like Home).

In between those covers, Caleb played a parade of wonderful original songs that made us laugh and tear up (sometimes in the same song). So yes, he’s an excellent songwriter. I’m listening to Seeing Colors this very second (while I type) and I’m reminded that Lois cried while he sang it last night.

The one is stage presence. He had every single person eating out of his hands (like at a petting zoo). This included little kids and old folk like us. It’s not just rehearsed lines (or if it is, he’s even more masterful than I realized) but a natural persona that you bond with instantly as an audience member.

The two (really an extension of one) is that he’s hysterical. He could definitely be a stand-up comic (in terms of delivery/style). 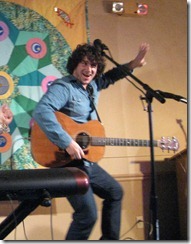 Craig accompanied Caleb on all but two numbers, wonderfully. Rachel joined Caleb to sing harmony on at least three numbers, one of which she also played the keyboards on.

They split the show into two sets, with Rachel opening each.

Two spontaneous things that turned into highlight reels. We had two guests with us, a mother and daughter. Craig called the daughter up to play the shakers during one song. She did a great job and Caleb actually interacted with her a bunch during the song and thanked her by name afterward. 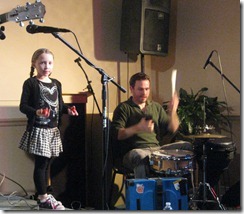 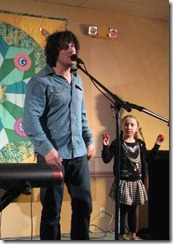 During the intermission, we bought two CD’s and a T-Shirt from Rachel and two CD’s from Caleb. Lois was wearing her Rachel T-Shirt already. Here are two shots of Craig with each of the girls in their Rachel shirts: 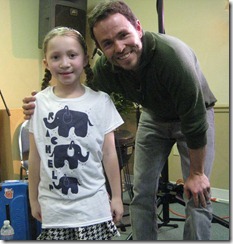 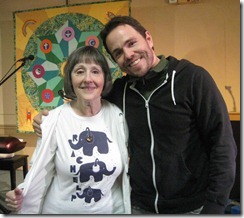 The other highlight occurred during the song Caleb called Cookies (the same song with the shakers, above). While he was performing the song (with Rachel singing too), Caleb noticed that a bunch of people were dancing at the back of the room. He made them all come up to the stage (Craig was instrumental in insisting they come forward as well). Once there, he taught them the Cookie Making Dance (my term). The audience hooted the entire time and they ended the song with a conga-like procession off the stage dancing the Cookie Making Dance.

Here’s a small sample of the dancing (Lois was too close to the stage to capture all the motion): 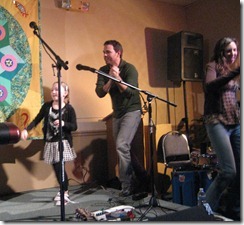 We were already big fans of Rachel and Craig. What a bonus to discover how enormously talented (and nice) Caleb Hawley is. We will now make it our business to see him as often as we can as well.

Thanks Ruth and the entire Unitarian Fellowship for putting on an extraordinary show and making us outsiders (Northerners at that!) feel so welcome! 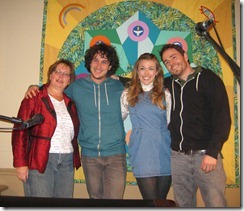 P.S. If you want to support this wonderful community, please make your next purchase from Amazon by clicking on the big Amazon ad on the front page of the Unitarian site. You’ll pay exactly what you would have otherwise and they’ll earn some affiliate commission.