Given how awesome last night was, I’m still a little in shock that I missed the first 12 Backscratch sessions. This was the second time it was held in Rockwood Music Hall.

Here’s the concept: gather a bunch of musicians. Each plays three songs. Traditionally (or so the legend goes) each played one original song, one well-known cover and one cover of another of the evening’s musicians, which they were each assigned at random! Now, it’s often two originals followed by the backscratch.

It’s great for many reasons (just come to the next one, June 27th, and make your own list of reasons to keep coming!).

Since there were so many people performing last night, I’ll be really brief (ha ha, I didn’t believe it when I first wrote it, but now that I’m proof-reading, I know it’s a lie!).

Refer back to the first line for how much we enjoyed the three-hour show: awesome!

Shwa Losben opened the show on vocals and acoustic guitar. I had never heard of him. Excellent! After playing two originals (both wonderful songs) his backscratch was an Alexa Wilkinson song (Alexa was new to us too, more on her later). 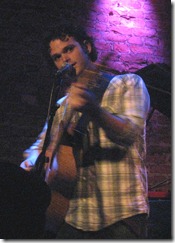 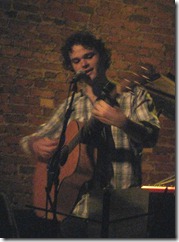 Scott Chasolen on vocals and keyboards. Another one we hadn’t heard of. Also excellent! I loved both of his originals. His backscratch was a Matt Simons song (I’m Already Over You). We’re big fans of Matt and Scott did him proud (IMHO). 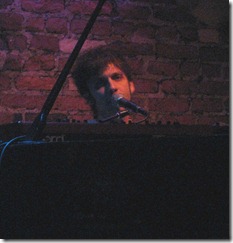 Scott performs with two others and they are known as the Scott Chasolen Trio: 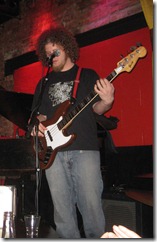 Josh Giunta on drums. Excellent. A lot of eyes were on Josh during a fair amount of Scott’s set. No good photo of Josh, sorry.

Sierra Noble on vocals, acoustic guitar and violin. We’ve seen Sierra Noble backing up both Rachel Platten and Martin Rivas (back-to-back sets on the same night). I am aware of how much her fellow musicians respect and love her, but that night, while she did a fine job, I didn’t see the light. Last night, headlining the three-song set, I got it. She has an incredible voice. She writes beautiful songs. 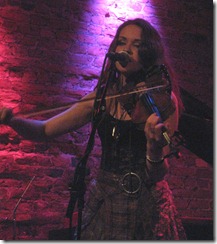 Sierra was accompanied by Martin Rivas on acoustic guitar and a lot of harmony, Chris Anderson on electric bass and light harmony and Craig Meyer on the drums (Craig is the co-founder of Backscratch with Martin Rivas). 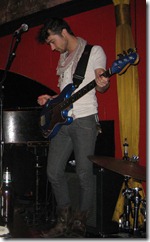 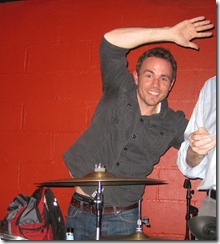 Not much else needs to be added. But, let’s add an anecdote (actually two!) anyway. Her backscratch was a Chris Ayer song. Sierra was expecting Greg Mayo to show up in time to perform it with her (and Martin, Chris and Craig). Greg must have been held up in traffic. Somehow, that threw Sierra off a bit.

While she did a great job on the parts that she got out (did I mention she has a great voice?), she also lost it (laughing) a number of times (including dropping the lyrics on the floor). The mood was light in the room and everyone got a kick out of it, including Chris Ayer. Sierra correctly noted that Chris is a poet and that it was difficult to sing his song because she hadn’t graduated from college (could be a joke, but it was an honest homage to how wonderful Chris’ lyrics are!).

The other one is a small world story. I’ve written a number of times about a great singer/songwriter, Jesse Terry. We’re going to see him again twice in May, once in Rockwood (next week) and the week after at a house concert (where we first saw him). Appearing with him at both shows is a friend of his, Michael Logen. Jesse has told me how much I am going to like Michael. One of Sierra’s originals was co-written with Michael Logen. Martin sang Michael’s part in gorgeous harmony with Sierra.

Martin Rivas on acoustic guitar and vocals. Martin opened with Raise Me Again. That song gets to me every time (including last night). His second song was a new one (excellent!). Rachel Platten was standing behind us and she couldn’t resist singing some soft harmony with Martin (wonderful). 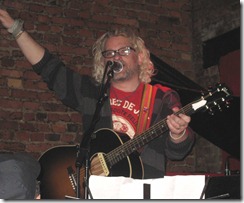 For his backscratch, Martin drew Bess Rogers. He played Come Home. In case that wasn’t good enough (it was!), he morphed the end into a song that most people in the audience recognized, but I believe were still caught completely by surprise!

Bess Rogers is in the final four days of a very successful Kickstarter project. You should watch the video on her Kickstarter page to see how records are made. Martin performed that song (perfectly) and everyone was blown away (especially Bess). You still have a chance to contribute to Bess’ record. Stop thinking, just do it.

Chris Ayer on acoustic guitar and vocals. Chris played Graduate and Stranded (two of our favorite Chris Ayer songs). Throughout the evening (3+ hours), there was generally a background noise of some people talking steadily at the bar. Occasionally it was annoying, most of the time it was reasonably white noise. When Chris played Stranded (a relatively long song), you could have heard a pin drop (as it should have been for every song by every performer!). 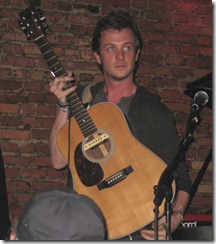 On Graduate, Chris was accompanied by Matt Simons on keyboards and Chris Anderson on electric bass. On Stranded, Matt accompanied and Chris Anderson left the stage. For his backscratch, Chris Ayer played a Sierra Noble song solo. Wow! Not just Chris’ performance, but Sierra’s song. Chris didn’t even look over at his sheet music. Sierra was standing a few people behind us and she sang some soft harmony with Chris (that most probably couldn’t hear, but I could). It was amazing!

Bess Rogers performed two new songs (acoustic guitar and vocals) accompanied by her husband, Chris Kuffner, on acoustic guitar (Chris also sang harmony). Both songs were hits with the crowd and I assume (but don’t know) that they will both be on Bess’ new CD. Bess drew Rebecca Haviland for her backscratch. 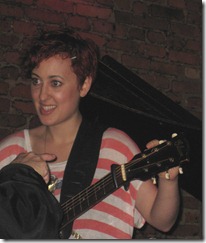 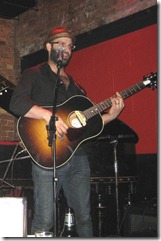 Rebecca Haviland on electric guitar, keyboards and vocals. Rebecca honored the original spirit of Backscratch by performing an original, a well-known cover and a backscratch. Let’s get out the most important thing first, Rebecca has a phenomenal voice. She plays the guitar well. She really shines on the keyboards. For her cover, she chose Black Dog by Led Zeppelin. If you didn’t know the title, or recognize the words, you would never have known it was a Led Zeppelin song. She (and her band) made it completely their own, a slow, soul/funk version. 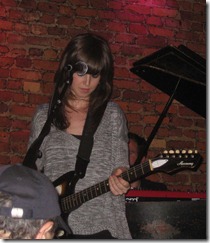 On those songs Rebecca was accompanied by Greg Mayo on keyboards (yes, he eventually showed up), Chris Anderson on electric bass and Kenny Shaw on drums. All were great, as we’ve come to expect. 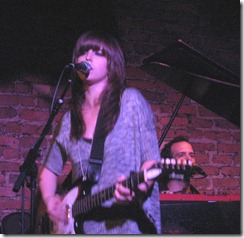 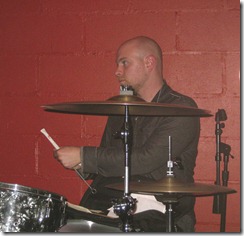 For her backscratch, Rebecca switched to the piano and Greg to the electric guitar. She played a Martin Rivas tune with such heart and soul (joking in advance that she had to change it up a bit, since Martin is the king of soul!). Greg played a couple of long guitar solos. If you’re read this space before, you know that this excites and soothes me at the same time. I will never get enough of Greg Mayo’s guitar play. Thank goodness he showed up! 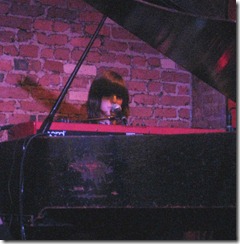 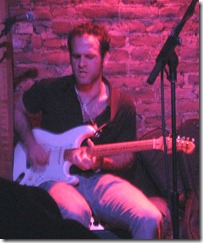 Alexa Wilkinson on acoustic guitar and vocals. I’ve been following Alexa on Twitter for quite a while but have never seen her perform. We had planned to catch Mercy Bell, Julie Peel and Alexa at the Living Room a long time ago, but I got very sick and we never made it. Alexa has a wonderful voice and accompanies herself on the guitar very well. I enjoyed both of her songs. For her backscratch, she drew Shwa. Alexa has a relaxed and funny stage presence in addition to her musical talents. 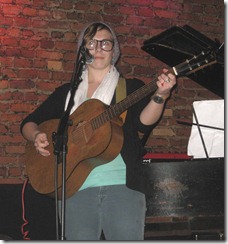 Matt Simons closed the show on keyboards and vocals. He too reverted to the original spirit. After his original song, he played one by Death Cab for Cutie. He was accompanied by Greg Mayo on electric guitar and Chris Anderson on bass and Kenny Shaw for his original number. For his backscratch, he drew Scott Chasolen (who had drawn him, as did Sierra/Chris). He did a fantastic job (making me want to hear more Scott originals). 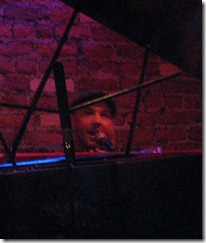 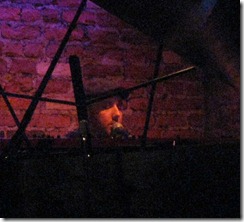 Even though we didn’t get home until 12:20am, it was well worth it.