The last show included a full band. Last night was (nearly) 100% solo. I was surprised, as Rockwood 2 tends to feature bigger sounds (many exceptions) and the one solo set that I saw of Jesse’s was at Rockwood 1.

Surprise aside, Jesse was great and the entire set was a joy to listen to. It’s nice to know that I won’t spend a second in the future thinking about whether to attend one of Jesse’s shows based on whether he’s solo or complemented by a band.

Jesse opened the show with a comment that reflected the sentiment that he tweeted earlier in the day:

twitter makes me forget that there are in fact other things happening on earth besides sxsw.

Amen brother. When you follow as many musicians as I do, your timeline blows up during the week of SXSW. In fact, since I follow a bunch of tech people too, the problem is even larger.

Jesse declared this set to be the Anti-SXSW show. Well, I would have accepted that, except that the single most important piece of information that I’ve gleaned from the billions of SXSW tweets is that there are more beards in Austin at the moment than there are in all other cities in the world, combined.

Jesse was sporting quite the beard himself last night. If he truly intended this to be the Anti-SXSW show, he should have shaved.

The point of telling you all that (aside from having an excuse to praise Jesse’s beard) was to highlight Jesse’s stage presence, something I’ve written about glowingly twice before. He’s warm, funny, quick, without overdoing any of it. It flows and works.

So, I already told you that Jesse was great. In a few words, all of which are repetition from past posts, the reasons are: 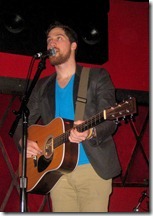 In addition to playing a string of his hits (his word, delivered with sarcastic humility, though they should be hits), he invited one guest up to join him for a cover of Don’t Think Twice by Bob Dylan.

Alexis Babini joined Jesse and played the harmonica between verses. During each chorus, he looked like he was going to sing harmony as well, but he stayed just far enough away from the mic for that not have really happened from my perspective. That’s the only reason I added “(nearly)” when describing the show as 100% solo.

There was a really nice crowd at Rockwood, so not every music lover ran to Austin this week. We’re very glad that we were part of it as well.

After the show, Lois asked Jesse for his set list. In fact, she just wanted to take a photo and return it to him. Before she could explain that, he ripped the page out of an actual book that he had written the set list in. The page ripped at the top left corner. Lois tried to paste a blank piece of paper in and fill in the missing piece of the first song title, but it came out worse/unreadable (in my opinion). The first song was Unbreakable, an absolutely fantastic song. 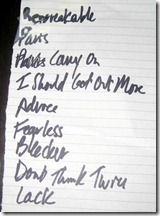