Caleb Hawley headlined a set at Rockwood Music Hall Stage 2. Ever since we saw Caleb play a house concert in VA, I’ve wanted to see him as often as I can. That hasn’t worked out as well as I had hoped, so when he returned to NYC for last night’s show, I wasn’t going to miss him again.

When I first see someone, I tend to write a longer, more detailed (in the excruciating, please stop sense) post. That’s what I did for the house concert, but it was back in the days when I wrote a single post about the opener and the headliner together, something I rarely do now. Caleb was detailed lower down in the post, since we originally showed up primarily for the opener, Rachel Platten. If you want to know why I fell in love with Caleb Hawley, read that post.

We’ve seen Caleb a couple of times since then, never doing a full set of his own material. That’s a shame, because in addition to being an excellent performer, he’s an excellent songwriter.

One of the most impressive things about Caleb is how comfortable/natural he appears in front of any crowd. He might be quivering underneath, but there’s no hint of that. I’ve seen him take his shirt off (at another show) and unashamedly shake his less-than-six-pack-abs belly for our amusement. The more typical thing is his disarming smile and style, which just makes you want to keep your eyes on him.

That’s good, because while you’re keeping your eyes on him, you’re hearing an incredible voice and watching an absolutely exceptional guitar player. 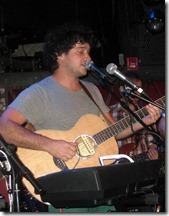 Last night was a joyously fun set, complete with very talented people supporting Caleb. It also featured Caleb playing electronic keyboards on the first few numbers, something he claimed he was nervous about (see above for why I don’t believe Caleb ever gets nervous).

Let me praise the band, then circle back to some additional comments about Caleb. Left-to-right on stage:

Patrick Firth on electronic keyboards and heavy background vocals. Patrick is a perennial favorite of ours on the keyboards. We were seated a couple of feet from him, so we got to watch him work his magic directly. He also sang harmony on practically every number (perhaps every one), wonderfully. 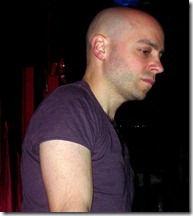 Evan Watson performed double duty. For half the set, he manned the drums (that was a first for me, seeing him play the drums). He was good enough to support Caleb, but he’d have to work hard to match most of the other local drummers. For the other half of the set, he was well into his comfort zone, lead electric guitar. Totally sweet! Occasionally, he leaned over to share (or take over) the mic in front of the bass player, to sing some background vocals. He also sang a bit when he was at the drums. 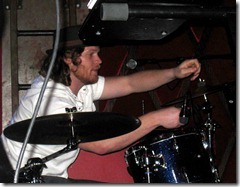 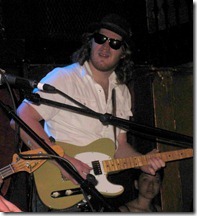 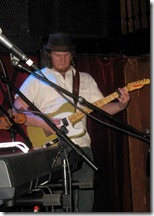 Brian Killeen on electric bass and background vocals. Brian is always wonderful, but Caleb gave him a couple of long-ish leads, which Brian nailed, to the delight of the crowd. He also sang quite of bit of background vocals with Caleb and Patrick. Another winning performance. 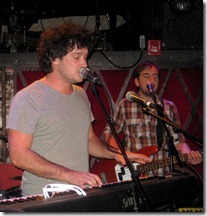 Considering the name of the opening song, it was entirely appropriate that the entire band donned sunglasses to try and remain incognito while entertaining us: 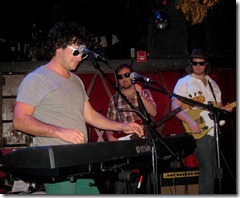 Back to Caleb. I already said how much I enjoyed the set, but he still hasn’t recaptured the feeling (for me) that I had the first time I saw him. For most artists that I see, if they do both full band and solo shows, I typically prefer the full band ones. That’s even true when they are amazing solo performers.

Caleb is an exception to that rule, so far (but not the only exception). His full band show was fun and engaging throughout, but his personal artistry and wizardry is lost (or rather, watered down) in the fullness. He’s so good on the guitar, which is so much more obvious when no other instrument is playing (or when he has only a light-touch drummer supporting him, e.g., Craig Meyer). He has a great voice, which is also more obvious when there aren’t other instruments wailing. He is a great songwriter and it’s easier to concentrate on the lyrics when it’s just him.

I can imagine that with a different set list and a different arrangement, I could feel the same way about a full band show (certainly, there’s no issue with who he picks to support him!). Basically, I guess it boils down to Caleb being too generous with wanting everyone to be (nearly) equal in a full band show. In my opinion, his sets need to be about Caleb, first and foremost, with everyone else being the super professional musicians that they always are, and just support him.

I’ll be seeing Caleb again this coming Monday, 7-9pm, next door (Rockwood 1), when he is the MC for The CEO Artist showcase (put on by Christina Morelli). I imagine he’s quite the MC, given what I told you above about his stage presence.

Caleb is a celebrity in NYC (independent of his run on American Idol last year), so we always get to see many friends at any show that he is part of. We could have spent the entire evening chatting and catching up. Instead, after a few quick hugs and hellos, Lois just took photos of our friends. 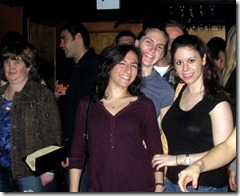 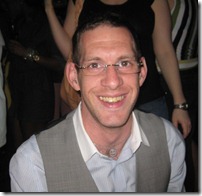 Bri Arden will be one of the performers at Monday’s showcase with Christina Morelli (and Chrissi Poland, hidden from view, who will also be performing on Monday): 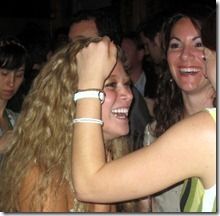 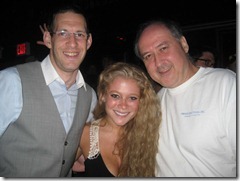