We take multiple multi-week trips a year. The first two weeks of February happened to be one such trip. Before we left, the south got hit with the big ice storm. Northerners were making fun of people in Atlanta and Birmingham (even I recalled some locals panicking from 1/4″ of snow on a past Birmingham trip). That turned out to be an absurd reaction when actual photos and videos started flooding in.

On Wednesday (2/12/2014) we were in Birmingham (one of our regular stops on these trips). They were predicting a big snowstorm overnight. We were more than a bit worried, because we had plans to meet friends in Atlanta the next day for lunch, then head home (a two day journey). Atlanta was predicted to be hit even worse than Birmingham.

After saying goodnight to our godchildren we hunkered down in the hotel. Sure enough, the snow came in fast and furious, going from zero to a few inches really quickly. We let our Atlanta friends know that we’d make a final decision in the morning, but were leaning toward canceling.

Our car was buried in snow and the roads were pretty slick. Having heard that Atlanta was worse, we decided to head north rather than east. We left early, while people were being warned to stay off the roads (silly northerners!). We did fine getting out of Birmingham, but we had to travel super slowly, largely because of the over-caution that other drivers were exhibiting (we were completely fine with that, in non-New Yorker fashion…).

Once we were on I-59 north conditions remained bad, but there were so few cars/trucks on the road, that it was a pretty good ride. In fact, that ended up being true for all of I-59, then I-24, then I-40 and I-81 as well. We were making reasonably good time.

When we leave Birmingham early, we usually make it all the way to Winchester, VA for the night. It was clear we’d never be able to do that in these conditions, but it seemed we’d make it to Roanoke for sure.

As we were approaching exit 92 on I-81, we saw traffic was slowing to a crawl ahead of us. It seemed to still be moving, albeit very slowly. I considered getting out at exit 92, but the sign said “Service Road”, no town name, no route name. It seemed it could be a bad detour, if this was only a minor hiccup on I-81. So, foolishly, I decided to fight on.

A minute later, we were in a 100% standstill, about 1/2 a mile from exit 94, Pulaski. After about 20 minutes I shut the engine off. About 10 minutes later, we started to move, but that turned out to be only about 1/4 of a mile (still not close enough to see the exit ramp) and then I turned the engine off again.

We happened to be stopped in the right lane, staring at the on-ramp for exit 94. In the 30 minutes that we sat there, only one car came up the ramp. I kept thinking we were so darn close to being able to back down that ramp, but it could be hours before we could inch up enough to find out. Then Lois said the same thing and I told her I’d been thinking the same thing for the past 15 minutes, but I didn’t think we’d get the chance to find out.

All of a sudden, we see a guy get out of a car behind us, in shorts (it was 30 degrees out) and walk by our car to scout the situation. When he returned, he was looking directly at us, so I rolled down the window. He said if a few cars moved over a bit, including a truck reversing diagonally from the right lane to the left lane, he thought we might just be able to squeeze through on the shoulder to get to the on-ramp and back down. He stopped to talk to us because we were directly in front of him and he was curious whether we’d be game to try.

I told him if he could convince everyone else to shift around, I was certainly willing give it a go!

So, I fired up the engine, and went into the shoulder with him following me. We passed a couple of cars, who (I’m sure) thought we were jerks for going into the shoulder, but then I saw what he meant about the necessary ballet movements. There was a tractor-trailer that had switched lanes from the left to the right, but hadn’t completed the maneuver before he hit a wall of traffic.

The guy behind me went to speak with him about backing up to return to the left lane. The truck driver came to talk to us (super nice guy). He said he was willing to try, if the guy behind him would back up a bit. The guy behind us had already gone to speak to him (and the car behind him), and as we were talking to the truck driver, they were starting to inch backwards.

The truck then successfully reversed back into the left lane. Then the mini-van in front of him maneuvered to left-most edge of the right lane, to give us some more room to maneuver.

You can click on any of the images to see a larger size. I stripped out identifying marks on the truck and blurred license plates in the hopes of not getting any good Samaritans in trouble. 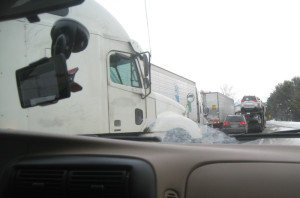 We were still a hundred feet from the entrance ramp with a big mound of snow blocking the shoulder right in front of us. There was a car carrier in front of the mini-van without the slightest hope of being able to budge even an inch. So close, yet so far.

But, I have 4-wheel drive (in a 14-year-old Ford Explorer, with 266K miles on it!) and I decided to try and make it over the snow mound. I gave it a few shots, but the wheels were spinning aimlessly each time. Luckily, I was able to reverse back into the shoulder each time. I have a feeling that a few dozen more tries might have gotten us over the hump. Thankfully, I didn’t have to find out the hard way.

Out of my side mirror, I noticed someone talking to the guy with the original plan. He was holding a shovel. Not a snow shovel, the kind of shovel that you would dig up a giant yard with (a man’s shovel). He walked in front of our car and starting shoveling a path without saying a word to us. It was surreal (and amazing and beautiful). 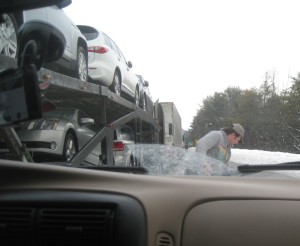 When he was done, I put the car into drive, and while my tires spun quite a bit, I made it over the remaining hump on the first attempt. Victory!

Here’s a shot of what we saw as we started backing down the entrance ramp. 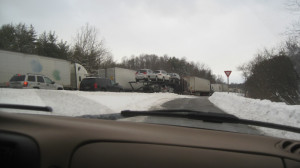 The rest of the story is not uninteresting (to me) but it has nothing to do with the miracle on I-81. We ended up spending the night in Christiansburg, VA, about 40 minutes south of Roanoke. We made it home the next day (Valentine’s Day, awwww) with a couple of minor incidents along the way.

I can’t begin to thank the many people who were willing to do some pretty odd things on a major highway to see if some adventurous souls could try some unsafe things in order to escape a multi-hour traffic jam. If any of you end up stumbling on this post, please do reach out.

For those who are interested in knowing more about the jam we were in, here’s an article that implies that it lasted through the night!

Happy to be home, though we returned to over two feet of snow in NY. Of course, to us Northerners, that’s nothing. 😉