On Tuesday night we saw Vienna Teng perform at Parkside Lounge. I detailed the show in this post. Two points to carry over from that night: 1) Vienna tailored the set list for the audience/venue and 2) She played 100% solo. Last night showed her flexibility in mixing it up.

If you’re a fan of an artist or a venue, I highly encourage you to find as many ways to follow them on the Internet (Twitter, Facebook, MySpace, FriendFeed, Buzz, etc.). You never know when a last minute show will be announced, or the artist might appear under a pseudonym, etc.

You don’t have to be a genius to figure out that it’s possible that Linz Ho was going to be Vienna herself. A little digging could easily confirm that. We knew we’d be there. 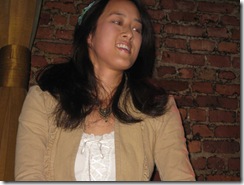 Yesterday afternoon, when checking the Rockwood Music Hall site to see who was on before Vienna I noticed that right after her (I mean, right after Linz Ho) were Ari Hest and Rosi Golan appearing together, as a new group called The Open Sea. A couple of hours later, Rosi tweeted the same thing, so I had two chances to discover their last-minute engagement.

Vienna was back on a grand piano last night. Her set list was excellent. Constructed from memory, so excuse any lapses:

The Drugs Don’t Work (a cover of The Verve), Blue Caravan, I Don’t Feel So Well, The Last Snowfall (with Ari Hest), accompanying Ari Hest on one of his songs, [Update: I knew I missed at least one, she played a new song co-written with ambeR Rubarth called Everything’s Fine], 1 Br / 1 Ba, Augustine, City Hall 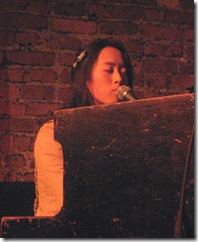 Vienna closed the show with City Hall, which was the first time in the nine times we’ve seen her perform that she didn’t close with Grandmother Song. City Hall was an excellent choice, and she continues to keep us on our toes. 🙂

The song that Ari sang during her set was a song he debuted during a Vienna set in January that I covered in this post. He didn’t write the lyrics on his hand this time, and therefore didn’t need to use a candle to see them (a shame, because that was a very cool visual effect!).

Here they are singing The Last Snowfall together: 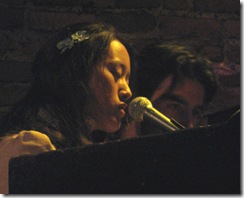 Vienna apologized for not having prepared enough in January to accompany him that night (to her standards, as none of us noticed anything other than excellent piano playing on her part). She was determined to rectify that, and she did. Her piano was incredible on this song, and I encourage Ari to get her to record with him whenever he gets this track into the studio.

Even though she performed under a pseudonym, Rockwood was packed. In contrast with the act on before her (which I’ll cover briefly at the end of this post), people were hanging on her every word/sound, meaning, it was a quiet and respectful crowd.

The band referred to above turned out to be:

Melissa Tong on violin (and even harmony on one number, which was a huge and pleasant surprise!). Melissa is always top-notch and last night was no exception. 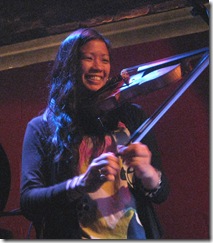 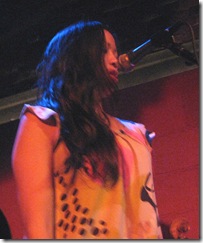 Doug Yowell on drums. I think this was the first time that Doug has played with Vienna. [Update: Vienna’s manager informed me that Doug has played with her before, and is in fact on the live DVD which we own, but haven’t watched yet. Thanks Amy!] He was excellent throughout the set, and did a very nice job on the potentially difficult Augustine, which has a lot of drama (should that be drumma?) 😉 in it. 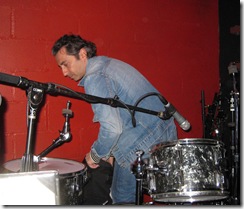 In the middle of one her songs, Vienna forced Doug to take a dual solo. While continuing to play the drums alone, she made him do his rendition of John Wayne’s drunken commencement speech. When he hit the punch lines, the crowd was hysterical. It took a while to compose ourselves, even when Vienna was singing again. Well done! 🙂

We’ve only gotten to see Rosi Golan and Ari Hest perform briefly. In addition to Ari’s song with Vienna in January, both he and Rosi performed at the Haiti Benefit which I covered in this post. Both had a full band, and it was a pretty crazy night with so many performers rotating throughout the show.

At the Haiti Benefit, Rosi won the raffle for a high-end Martin guitar, signed by all of the performers (including Rosi, Ari and Vienna!). She debuted it in public last night, and here’s Ari making a surgical adjustment to it before it was formally introduced to live play: 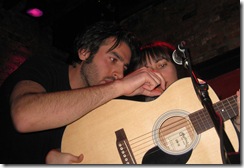 Last night was a perfect setting to see each (and both) perform to their true abilities. We were sitting two feet from them (literally). They are each headlining performers (solo and with full bands) in their own right. They also have a side project together, called The Open Sea. This show highlighted The Open Sea, but each did a few of their own numbers as well, with Ari doing one solo. 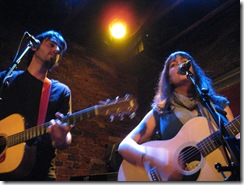 Both Rosi and Ari have exceptional voices. I can’t describe how well they go together, you’ll simply have to make it to a show to be placed under their spell. I already told you how quiet the crowd was for Vienna, the same was true for Ari and Rosi, because the thought of missing a single note was inconceivable.

They performed four numbers that they co-wrote for The Open Sea. They played at least another four of their individual songs (photo of the napkin set list appears below). Ari finger-picked the guitar on all but one song, and this is the first time I got a chance to notice and appreciate what a wonderful guitar player he is. 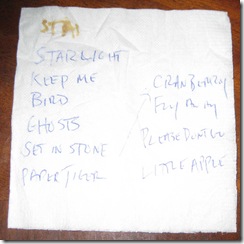 Rosi complained that she had SXSW Voice, a condition caused by having to give so many interviews and performances in a short time, often yelling over tons of incredibly loud music. While it may have felt awful inside of her, it sounded as sweet as could be externally. Rosi will be headlining The Highline Ballroom on April 22nd, and I encourage you to run (not walk) to get tickets and make it to that show! 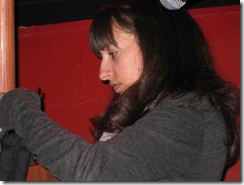 In the fall, Alex Berger told me that I needed to buy Rosi’s CD The Drifter and the Gypsy. I dawdled longer than I should have, but bought it a few months ago. Wow! The entire CD is fantastic. The opening song, Think of Me, grabs me every time I listen to it. It was just featured in the new movie Dear John. Excellent choice on the part of the producers of the film!

Think of Me is available for you to listen to on Rosi’s MySpace page (linked above). Do yourself a favor and check out my claim. 🙂

Ari Hest just finished recording and mixing a new CD. It was produced by the extraordinary Alex Wong. Given how much I love The Paper Raincoat, Alex Berger’s Snow Globe and Vienna Teng and Alex Wong’s Inland Territory CDs (all produced by Alex Wong!), I can’t wait to get my hands on Ari’s CD when it finally lands. 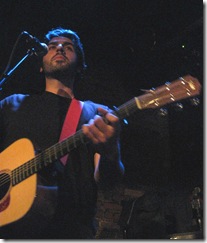 The Open Sea is working on a new EP. I can’t wait for that either. Why are you folks eating and sleeping, when I have a need to listen to your new music over and over?!? 😉

To repeat my point from the introduction to this post, if I didn’t follow Vienna on Twitter, I would be reading someone else’s account of last night’s show, rather than sharing these extraordinary memories with the rest of you, having experienced them first hand!

Rockwood is a fantastic place to see live music. Unfortunately, it’s small and has very few seats. We would stand for Vienna, Rosi and Ari, but we much prefer to sit (much). So, I looked up the act that was on before Vienna, and we decided to catch that set as well, in the hopes of snagging a seat we could hang on to throughout the night.

Bryan Dunn played with a full band, singing lead vocals and playing both acoustic and electric guitar. Most songs were a driving rock style with Bryan singing his heart out. He played rhythm on his acoustic (mostly) but took some nice leads on his electric. He has a great personality on stage and comes across like a very nice guy. 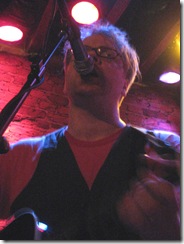 Jim McNamara played an upright bass. He blew me away. I can’t say that I recall an upright bass being used by a mostly rock ‘n roll band, but Jim made it work perfectly. A few times he played leads in harmony with Bryan’s guitar. Some of those licks were pretty darn fast, and he nailed every one of them! 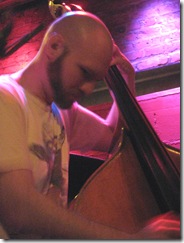 Craig Greenberg played the piano and sang some harmony vocals. Craig did a solid job on both, and Bryan gave him a few leads to stretch himself on the piano. 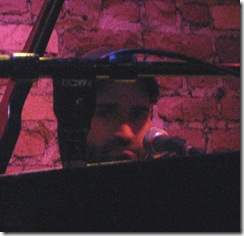 Chris Benelli played the drums. This was the first time that Chris played with Bryan Dunn, and he did a very nice job. 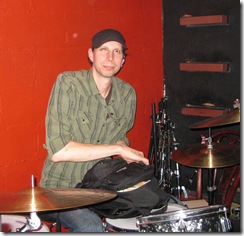 We enjoyed their music, though it was a bit loud given how close we were to the stage. The only surprise (mentioned to contrast the quiet we experienced for Vienna, Rosi and Ari) is that people took the opportunity to talk to each other too much for our taste during Bryan’s set.

To make matter worse, because the music was so loud (which is what I think makes people feel that it’s OK to talk, heck, no one will hear them, right?), they had to scream at each other, which of course, then makes it easy to hear them.

Amazingly, a number of the worst offenders were personal friends of Bryan, who obviously came out to support him. He closed the show with a cool song where the audience sings and he responds. Two tables filled with his friends (one included his wife) did a fantastic job of singing and making the song a ton of fun. One of those tables was filled with people who talked throughout the rest of his set.

Another fantastic night out! 🙂