Chris Ayer at a House Concert

This was a weekend extravaganza hosting our godson (David) and his wife (Rebecca). In addition to seeing Wicked earlier in the day (covered in this post), we wanted to take them to see some live music in NYC. Our core group consisted of 10 people, which could present logistical problems with finding the right show to accommodate us and still allow for the socializing before/after the show that we desired.

It occurred to me that even though we are loath to put on a house concert in general (logistics, weather, etc.), since we could constrain the group to be reasonably small, we might try to pull off a little miracle this time around. I was hoping for a solo, guitar-wielding singer/songwriter, so that we could easily move it indoors if the weather turned nasty (we planned this a month ago).

We love a lot of singer/songwriters that are based in NYC. With no offense to any others, Chris Ayer was at the top of our list. He’s the first one we asked, and the last, since he said he was available.

Let me (now) apologize to all of our friends, especially those who are also huge Chris Ayer fans, for not inviting you. Since this weekend was about our godson, and his sister (our goddaughter, Laura) lives in the same building as we do, we restricted the guest list to their friends only (and us, of course). There were 16 audience members.

Since the evening was about socializing as well (David and Rebecca live in Birmingham, so none of us gets to see them as often as we’d like), we invited people to come at 6pm, with music slated to begin a little after 8pm. The original invitation said “Sushi” for dinner, but we knew that a few people don’t eat Sushi. A couple of diligent husbands pointed out that their pregnant wives couldn’t eat Sushi either. One of those pregnant wives delivered the night before (and stood us up for the show, can you believe it?)!

Congratulations to Laura and Jason!

The day before, Wes, Jacklyn and I walked to see Super 8 (I might be one of only three people in America to think the movie is entertaining, but really stupid). On our way over, it poured so hard that we (and roughly 50 other people) had to stop (even though we had umbrellas) under some construction scaffolding for nearly 10 minutes, to avoid the feeling of taking a full bath in our clothes.

When we arrived back at the apartment, I noticed a giant rainbow and Lois snagged these photos (the rainbow disappeared within a few minutes!). It turns out that the rainbow appeared nearly coincident with the birth of Laura and Jason’s daughter. How awesome is that? 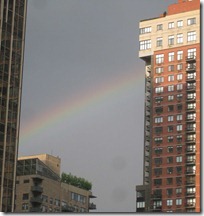 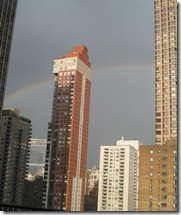 Don’t worry about us, we still had two remaining pregnant women in attendance, so I think our quota was still met.

There was plenty of other food to eat, and general merriment took place from 6pm onward. 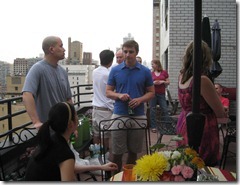 We were thankful that Chris arrived early enough to taste some of the Sushi as well. I also cornered him and fired off a bunch of my imponderable questions about music, including asking him whether he buys lefty guitars, or plays upside-down, etc. Thanks for being a good sport Chris and answering all of my questions patiently. 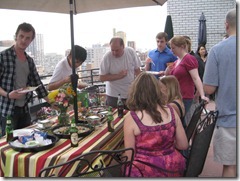 Shortly after 8pm, we pushed one of the tables out of the way (yes, our deck is a veritable furniture store) to make a nice spot for Chris to play in. 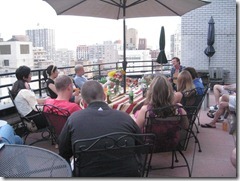 Chris had his traditional set list written out on his arm (and my traditional photos showing you his and our views):

After Chris played a few numbers, he asked whether anyone had requests. Lois fired off a few (including some older ones). He agreed to play one of her current favorites (she has dozens), Snake Skin Heart. After playing a second request from her, my competitive juices were flowing and I weighed in with Hiding Places (a new one that we love) and Stranded (which was on his set list already).

When I introduced Chris (before the music started), I mentioned that I think of him as a modern-day James Taylor whereas Lois thinks of him as a modern-day Paul Simon. At one point, Chris asked if anyone wanted to hear any covers. Naturally, some Paul Simon songs were called out. He played The Boxer (beautifully!), then Kathy’s Song (wow!). Again, my competitive juices could not be controlled. I called out for any James Taylor song. He performed Fire and Rain (perfect choice!).

After the show, one of Laura’s friends (who I met for the first time last night) came up to me and said: “Chris’ James Taylor cover was spectacular, but I have to side with Lois in comparing him more to Paul Simon. I wonder whether we won’t soon all be calling him our modern-day Paul Simon!”. OK, uncle!

When Chris returned to playing his own numbers, both Lois and I were about to ask for Say What You Mean (independently, we only found that out after the show when comparing notes). Before we could get it out, Chris started introducing it. It’s about his Grandfather, which we knew, but the story that inspired it was new to us and incredibly touching.

While introducing it, he mentioned that his grandfather was in the Navy at Pearl Harbor. The person sitting closest to Chris during the show was Laura’s husband, also named Chris. Our Chris was in the Navy for six years and it didn’t seem accidental to me that he ended up being serenaded to that closely on this song (and obviously the rest of the songs).

Lois had asked (at least three times) whether Chris was going to do Roy G. Biv. He answered yes every time. I guess she wanted to make sure he wouldn’t forget.

He didn’t. He closed with an absolutely fantastic rendition of it. He introduced it, and nearly every song last night with some background or context about the song (I love that part of live shows!). Even though we’ve seen Chris many times, most of the backgrounds we heard last night were new to us, and I enjoyed every single one.

After the show we opened it up to questions of Chris and there were some really good ones. A few examples: co-writing vs writing alone, how long it takes to write a typical song, which comes first, melody or lyrics, etc.

Most of the people (including Chris) hung around to chat afterward, eating some dessert and the most incredible fresh fruit you can imagine (I’m still in a bit of a fruit coma over how good it was). We did allow the pregnant ladies to head out and get off their feet. We’re nice like that (sometimes).

I’d be lying to you if I said I could adequately describe how incredible the entire evening was, music, conversation, food, fellowship.

I’ll finish by throwing in bonus coverage from today.

If you know David, you know that his entire life revolves around Meatballs (ha, those of you who don’t know him think I’m exaggerating for effect).

How could we have him up to NYC and not take him to The Meatball Shop? We couldn’t and we didn’t! The core 10 of us headed down there shortly after it opened at noon today. We took over the tiny corner at the end of the bar (with most of us standing) and had an absolutely amazing lunch, including the obligatory ice-cream cookie sandwiches for dessert.

The kids went on for a very long walk, heading from the Lower East Side to the new Highline Park. Us old folk returned to the apartment, which is how I found the time to finish today’s posts.