On their birthday, most people wait (patiently or otherwise) to see what their friends and family will do for them. Musicians? Not so much. A number of them book shows on their birthday, effectively throwing a party for their friends, family and fans. Yesterday was Jeff Litman’s birthday and that’s exactly what he did, booking a show at 8pm at Rockwood Music Hall.

We planned to attend this and the show immediately afterward (covered in my next post). We also ended up attending an earlier show next door (covered in this post). When Nick’s set was over, we made the grueling 3-foot walk from Rockwood 2’s front door to Rockwood 1. Whew.

We saw Jeff perform at Arlene’s Grocery on May 20th (covered in this post). Last night he was supported by the same band, with one guest star joining them late in the set.

Jeff played the electric guitar for most of the set (very well). He played acoustic on a few and added harmonica on Maine. He played the grand piano on one number. 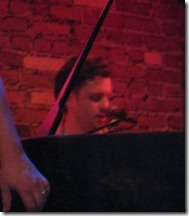 If you read the above-linked post, you know that I particularly raved about Jeff’s song Maine. I ended my rave with:

I’ll never get tired of this song, I promise!

Here we are, more than a month later, and not only am I not tired of it, I warmed up for last night’s show by listening to Maine while exercising the day before. So, I was grateful to Jeff that he didn’t torture me by saving it for the end of the set (he likely knew he couldn’t get out of Rockwood without playing it). As you can see, it was third on the set list. That allowed me to relax and enjoy the entire set without the anxiety of wondering when I’d get to hear Maine. 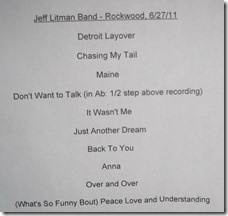 The entire set was excellent, with the exception of the fact that as I’ve noted a number of times recently, Rockwood 1 probably isn’t best suited to full-on Rock. It wasn’t too loud last night, but it was loud enough to slightly wash out Jeff’s voice at times. It’s a dilemma, because in general, Rockwood is such a great experience.

Having the intimacy of Rock right in your face is awesome, but not controlling the sound (because amps are a few feet away, uncontrolled by the sound engineer) is deflating. It’s not purely an overall volume issue (to repeat, last night wasn’t that bad), it’s a blend problem that doesn’t seem easily controllable from the main sound board. It’s also possible that it’s not as bad in the corners of the room, but we’re always up front, so we always feel the problem.

A quick tour of the band followed by the guest:

Bryan Dunn on electric and acoustic guitars along with harmony. Repeating myself, Bryan is excellent, pure and simple. Excellent guitarist, excellent voice. I like his original music as well as his side-man performances. Looking forward to his new CD later this year.

Matt Basile on electric bass. I enjoyed his play at Arlene’s, but he was often hidden from sight. Last night he was a few feet away from me and I could see all of his fingerwork up close and personal. The sound might have been just as good, but the experience was greatly enhanced (for me) by the visual. 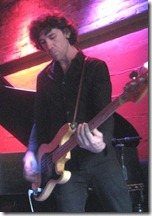 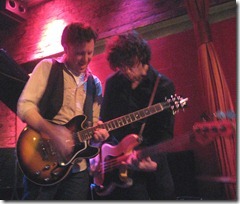 Elliot Jacobson on drums. Elliot is a machine (I suspect, literally). He’s so fast, so steady, so hard hitting, that after the show, both Lois and I asked him how it is that his arms don’t fall off while he’s playing. He said “Glue”.

More than likely, it’s constant practice and general exercise. I noted that it was more likely his Guns (the boy has biceps). No matter, whatever his secret regime, it translates well on stage. 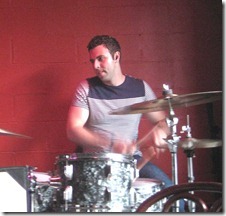 Jason Wexler joined for the last few numbers on the grand piano. Impressive. I’ll need to keep an eye out for him at future shows. 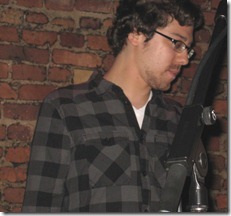 The best singing of the night occurred when Bryan Dunn led the rest of us in singing Happy Birthday to Jeff (who stubbornly refused to join in!). 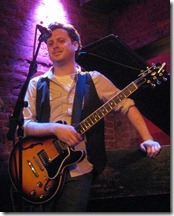 The next post will cover the next set at Rockwood. Jeff Litman happened to open that show as well. Happy Birthday to us!