The Thang Band headlined a set at Lagond Music School last night, closing out a fantastic show. I already posted about the set before them, Greg Mayo Band. I have seen The Thang Band once before and was really looking forward to seeing them again. I was nervous and excited for Lois to see them.

I wrote an incredibly long description of The Thang when I first saw them. I was tempted to reproduce it in its entirety here, but 1/3 of it doesn’t apply (because it wasn’t the same audience and they toned down their act a drop because this performance was at a school after all…). You can read the full description for yourself about 1/2 way down this one-year-old post.

Basically, The Thang are top musicians, irreverently performing for their pleasure. The rest of us are given permission to enjoy it with them (in fact, we’re encouraged). The irreverence touches everything they do, including the innuendo-laden tongue-in-cheek lyrics and the dramatic acting (presentation) of some of those lyrics. It’s a thing of beauty (or is it a thang of beauty?), if you can let go of societal norms for a little while.

Even in a slightly toned down show, there is something that simply can’t be contained: Energy. Their shows are upbeat, joyous spectacles.

They went through three wardrobe changes. Each was layered, so it was only a matter of removing a layer of clothing. The photos will tell the story, but you have to come to a show to experience the deep dialog that is coupled with each change. 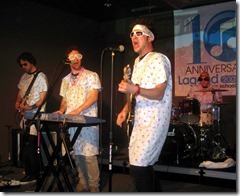 I normally mention band members from a left-to-right perspective, but that feels wrong with this band, so I will simply cover them in the order that I feel like at the moment.

Paul Maddison is one of three front men, but I declare him to be slightly more forward than the others. He plays the guitar (obviously), but that actually takes a back seat to both his vocals and his overall showmanship. Paul is like the conductor (of an orchestra, not a train). In addition to interacting heavily with every band member, he’s constantly drawing the audience in. 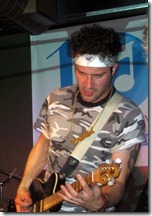 That last phrase is literal as well as figurative. He beckoned (more like insisted, strongly) that people come right up to the stage and bunch up and become part of the show. They did. If they were reluctant to begin with, that feeling faded right away as everyone was swept up in the show.

I have never taken the time to introduce myself to Paul. Last night, during the opener, he was standing right next to me. For whatever reason, I still didn’t introduce myself. That’s just stupid (on my part), since he brings me a lot of joy and he deserves to know it directly from me. I will correct that next time, pinky swear!

Dan Golden on keyboards, harmonica and vocals. He’s nearly equal to Paul in front man duties and as I noted the last time, definitely up to that enormous challenge. He’s excellent on both keys and vocals. On occasion he even steps away from the keyboard and sings (or talks/raps) directly to the audience (something Paul does a ton). 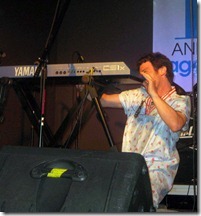 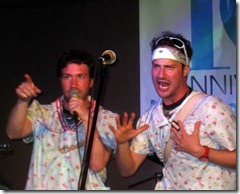 Rob Pawlings (a.k.a Bobby Bananas) on electric bass and vocals. I wrote about Rob in my earlier post about Greg Mayo Band, where he filled in for Chris Anderson. In this set, he cranked the bass up a notch (hard to do, as in some of the Mayo songs he was really wailing) but here he added quite a bit of vocals, including a fair amount of lead.

In one number, parodying any typical big-name rock band, he would have slammed his bass on the stage and jumped on it (for the full effect), except that it’s unlikely that any of them can afford to smash (and replace!) their beloved instruments. So, he went through the motion, but instead very gently laid the bass down on the stage and gestured at it as if he were hurting it.

As opposed to my inexplicable lack of introducing myself to Paul, I went out of my way to find Rob before the show and introduce myself. I’ve become a big fan of his, in particular when I saw him play with Abby Payne (also filling in for Chris Anderson that night). This was the fifth set that I’ve seen Rob play (including the one right before with Greg Mayo).

Dave Freedman on electric guitar. Dave is the quietest one in The Thang. He doesn’t sing or talk, but his guitar play speaks volumes. Paul is good enough to play lead in this band (or any other!), but by having Dave there to fulfill that role (brilliantly), Paul is really freed to run the show. Wait, because of Dave, Paul is a freed man. Hmmm, perhaps it’s all an illusion, and there is no Dave Freed Man.

Last but certainly not least!

Kenny Shaw on drums, cowbell, shakers, conducting and even light vocals. I mentioned in the previous post that I would heap a bunch more praise on Kenny. Of course he was great in the Greg Mayo Band set. The Thang is non-stop upbeat rock. The drummer (Kenny, in case you’re not paying attention) is in constant motion. He’s so fluid, fast and tasty that it’s a thing of beauty to behold. 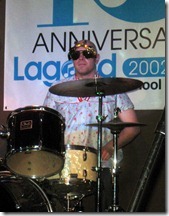 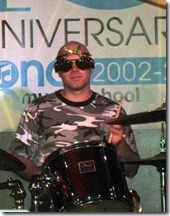 On one number, Kenny came out from behind the drums, Dan left his keyboard, and everyone but Dave sang a cappella with their arms around each other. Yes, that includes Kenny, pushing out some sounds through his larynx. Late in the song he whipped out a shaker (in the shape of an egg), which got a lot of hoots because it was the only instrument used on that tune. (Well, I think Dave gave them some very light-touch guitar accompaniment as well.) 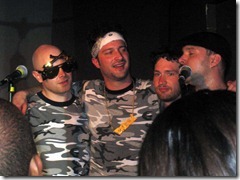 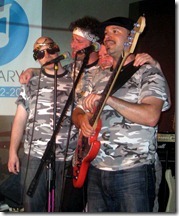 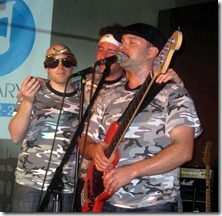 Toward the end of the number, he broke away from the others (Paul, Dan and Rob) and conducted the end of the song by moving his arm up and down, so that they knew whether to raise or lower their voices. Nicely done by all of them. 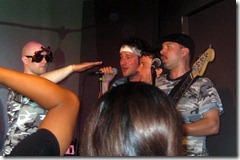 Martin Rivas was a guest on the previous set. He missed this one because he was performing at Rockwood Music Hall Stage 2 while this show was going on. He tweeted two short videos of Kenny Shaw with a halo of lights over his head (from the previous set!). Here’s a still that makes Kenny look more like an alien: 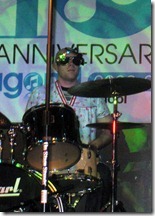 Late in the set Paul called up two very special guests. Both are/were students at Lagond. I’m not going to link to them because I have no idea how they intend to promote themselves, but each was easy for me to find if you care to check them out yourself.

Alex Silverstein on electric guitar. Paul admonished the rest of the students in the room to get back to their practice, given what they were about to hear out of Alex. One might assume that Paul was simply complimenting a student (encouraging him), but no, no no no, he was giving the rest of the guitarists in the room fair warning that Alex is the real deal and they better get on the stick. 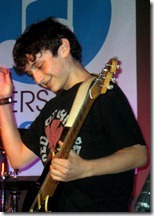 I don’t even want to tell you how young he is (it would make both of us cry!), but trust me, he’s still a kid (who knows if his voice has broken yet). Let me assure you, he doesn’t play guitar like a kid. He’s got the skills and the feel for the music. Bobby Bananas (Rob Pawlings) gave him a lesson in theatrics during one song, which Alex followed perfectly. He’s the complete package. 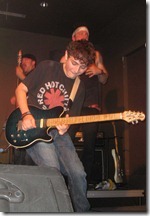 Kevin Myers on drums. Kenny stepped to the side and played the cowbell and shakers while Kevin took over the drum kit. Those are some big shoes to fill, especially during the same set that Kenny just tore it up. And yet, another holy cow, Kevin was up to the task (and more). He really was fantastic on both numbers (very long ones).

There was another benefit to having Kevin behind the drums (aside from his incredible play). It freed Kenny up to play a cowbell solo, seriously! In addition to the solo itself being awesome (Kenny didn’t just hit the outside of the cowbell in various spots at various tempos, he also rapidly beat up the inside of the cowbell with a drumstick.

It would have been amazing at that, but I would also swear that at one point, the sound guy quickly alternated between the left and right speakers, to that every other strike of the cowbell came from a different speaker, creating a phenomenal stereo effect (like there were dueling cowbells). If I’m wrong about that, then it’s time to get my hearing checked (which very well may be the case)…

Steven Salcedo was called up to play a long sax solo in one of the last songs. Paul personally walked the microphone down from the rear of the stage so that Steven could serenade us up close. Thanks Paul. Getting another taste of Steven’s play (he was a highlight during the previous Mayo Band set) was a nice way to top off an extraordinary evening. 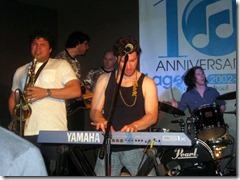 And, what show is complete without someone doing push ups on stage? 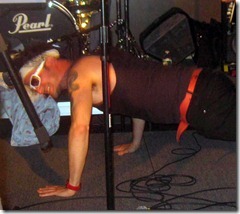 Now all I have to do is start training to stay up real late, as most Thang Band shows start at midnight or later. That made last night an extra special treat.