We got the briefest taste of Vienna Teng a few months ago when she was a guest performer at ambeR Rubarth’s CD Release Party, also at Joe’s Pub. The minute Vienna announced last night’s show we grabbed tickets (more on that later).

Alex Wong is well-known to us and I’ve written about him a number of times already (most often for his work in The Paper Raincoat).

Since this will likely get long (Hadar, do you ever write anything short and sweet?), I’ll spare those of you with little patience and give you the bottom line:

Vienna Teng is now officially on our stalkerazi list!

English translation: we will be following her around and trying to attend as many shows as possible. We’ll also be buying the rest of her CDs (we only own the most recent one, Inland Territory, which is awesome!).

Vienna is an all-around talent that can mesmerize on any individual level. Her piano playing is among the best we’ve seen live. If that’s all she did, we would still go see her often. 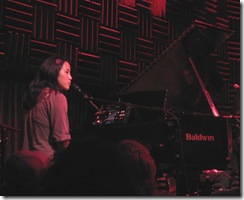 Her voice? Extraordinary! Clarity, range, power, emotional conveyance, variety, the works! If she sang a capella all night, we would still go see her often.

Songwriting? Exceptional! Deep, thoughtful lyrics. Wide range of topics. If she wasn’t a great musician, and didn’t sing so beautifully, we would still go to see her often for the quality of her songwriting.

Stage Presence? Wonderful! Vienna is warm and engaging, and comes across as natural as you could want from a performer. Her banter with Alex is excellent as well. She’s a natural story-teller. If all she did was tell stories, we would still go to see her often.

She’s working hard to master the guitar. I have little doubt that when she feels ready to perform in public, we’ll feel as graced as we do by her piano playing.

She’s beautiful too (not that there’s anything wrong with that!). 😉

Alex Wong is master of all music. He does a bit of everything as part of The Paper Raincoat (guitar, percussion, glockenspiel, keyboards, vocals, songwriting), so it would have been hard for him to surprise us last night.

When he plays with Vienna, he’s mostly a percussionist/drummer (superb), though he did play the guitar on at least two numbers. Of course, he sings beautiful harmonies with Vienna, but he takes more of a back seat than he does with ambeR and The Paper Raincoat. 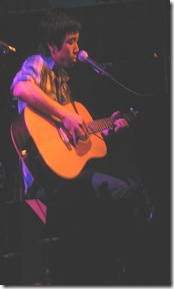 Ward Williams joined them for three songs, playing both cello and electric guitar (singing on one of those numbers).

Kevin Rice joined during the encore to play a snare drum, making for two drummers on the one song. It was a great sound. After the show, Alex told me that Kevin was the original drummer with The Paper Raincoat.

While there were never more than three people on the stage at the same time, they create a much larger sound. Both Vienna and Alex, independently, use loop machines to do that.

In the very first song, after Vienna sang one verse, she looped her voice back and sang stunning harmony with herself! Alex did similar things with the drums, laying down an intricate beat, then looping it and playing/dancing in and around that beat. Vienna also did that with the piano on occasion, altering it to a more electronica type sound, then accompanying that with a normal piano sound which she played live. Excellent, all around.

Last night was one of four shows that will be used to create a new Live CD. We can’t wait to buy it. 🙂 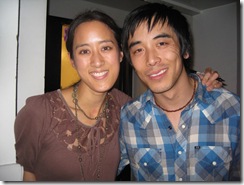 I’ve written a couple of times about our serendipitous discovery of The Paper Raincoat (originally covered here). That started a chain of events which has caused us to discover a number of amazing NY-based musicians, a few of whom have become friends in addition to people we enjoy seeing perform.

We can now safely add Vienna as one such musician/performer, and hopefully, after stalking her a bit more, a friend too. 😉

The glue in this new chain is a superb singer/songwriter/keyboard player in his own right, Alex Berger. I connected with him when he put up a video of ambeR, Alex Wong and Vienna performing In the Creases at Joe’s Pub (that first time we saw Vienna). I started following Alex on Twitter (@bergeralex) and the rest is history. 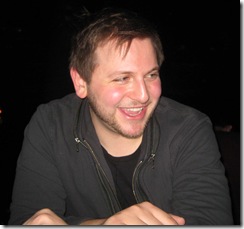 Through Alex, we discovered a dozen artists that we really like. One of them is the incredibly talented Amy Rivard. We invited Amy, along with two other friends (both of whom are Broadway musicians) to join us for the show last night, and the five of us had a wonderful time (and a wonderful meal) together. 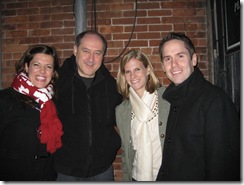 Amy was kind enough to agree to sing on my Tonight Show Tribute song/video collaboration with another amazing keyboardist, Ben Schwartz. Here’s a link to the YouTube Video. 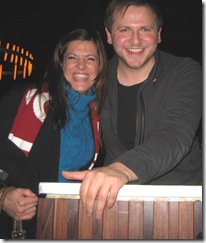 Alex Berger was at the show last night as well, and we were really happy to catch up with him afterward. Run and pre-order his upcoming CD (we are honored to have been the first people to pre-order). The brilliant Alex Wong produced Alex Berger’s CD!

Looping back to my comment about buying tickets for this show, I’d like to spend a few paragraphs talking about the difficulty and opportunities in the music business, using last night’s show as the spark and one specific example.

The best part of the current situation in the music world is that anyone (literally) can get heard. You can make reasonable quality recordings pretty cheaply and even get your music distributed for free. For more money (and time), but still much less than in the past, you can produce stunning quality recordings.

The worst part of the current situation is that while you can get your stuff out there, how do you build an audience to listen to it, let alone even find it. The signal-to-noise ratio is very low.

Obviously, not all (or even most) of the people who would like to make a living as musicians deserve to. But, the number who deserve to is still staggeringly large compared to the number who actually achieve that.

If you have major talent, the only reliable way to grind out a living (and it’s a huge grind, no matter how much you enjoy performing) is to tour a ton. It’s important to be creative, both to build a loyal following and to maximize their financial support toward your livelihood.

This is another area where The Paper Raincoat (and ambeR individually) and Vienna Teng have impressed us (and therefore have gotten our additional financial support).

In the case of ambeR’s new CD and The Paper Raincoat’s new CD (both superb efforts!), they offered multiple levels of pre-ordering, with each level delivering something additional and special to thank you for your patronage. It wasn’t just stuff (which would have been good enough), but generally had a creative flair, a personal touch, or something otherwise special as well.

I’ve posted photos in a previous entry, but in ambeR’s case, she hand-made boxes to house the pre-ordered CDs. The Paper Raincoat (at the highest level), included T-Shirts, Posters and a 4GB USB bracelet. The USB device had 330MB of goodies on it. Videos from a live show, a video thank you and a video of a practical joke. 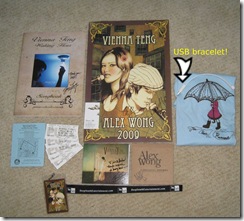 More amazingly (to me) was their inclusion of all of the songs on the CD as instrumentals. For those of us who love to sing along to their songs, we can do so without being distracted by them! Can you say Karaoke Party? 😉

Both Paper Raincoat and ambeR sent download links to the full CD the minute it was available, to anyone who pre-ordered. That put their music in the fans hands long before the physical CD packaging was done and available. Again, a very classy touch!

All three (ambeR, The Paper Raincoat and Vienna Teng) have used the amazing artist Diana Ho to produce artwork (for the posters and/or CD covers).

So, what did Vienna do last night to give more value, and get rewarded for it (both in loyalty and in dollars)? She offered a VIP package for the late show (she played two sets at Joe’s Pub last night).

The VIP package included a bunch of goodies, but I think the real hook was a private dessert and coffee get-together with Vienna and Alex after the show. Only 30 VIP tickets were offered. We grabbed two the second we saw Vienna’s Tweet (another reason to follow the artists you like!). The next morning, all 30 VIP packages were sold out!

@highceilings (not as obvious, Alex Wong)

@paper_raincoat (you get it by now…)

After the show, we hung around and talked to a bunch of people. 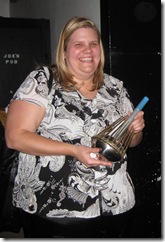 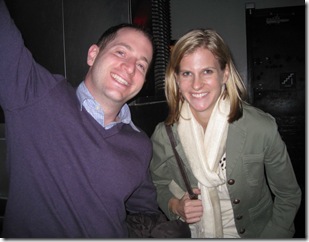 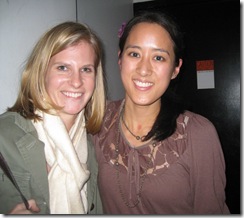 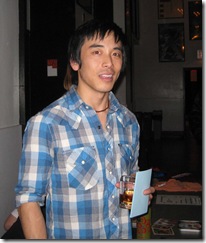 We even got to play Roadies a bit, carrying out some equipment to their van after the schmoozing was done. But in a surprise to all involved (Lois and I included), we realized that it would be imprudent to push the night as late as we had the night before, so we ended up not joining the after-show festivities.

Did we feel cheated? Did we feel like we over-spent on the VIP package? Not even for a second! We were thrilled to have supported Vienna and Alex, and to have had the choice to go if we hadn’t been so tired.

We spent today listening to Vienna’s music. The CD we own, her website (which has a button to play Radio VT on the home page), and listening to some live shows in the Internet Archive site. We loved every second of it. 🙂

P.S. As if I needed any additional reason to want to hang out with Vienna, but she appeals to the geek in me as well. She worked as a programmer at Cisco for two years before turning to a career in music. So, I could find things to talk about with her beyond our current obsession with live music…